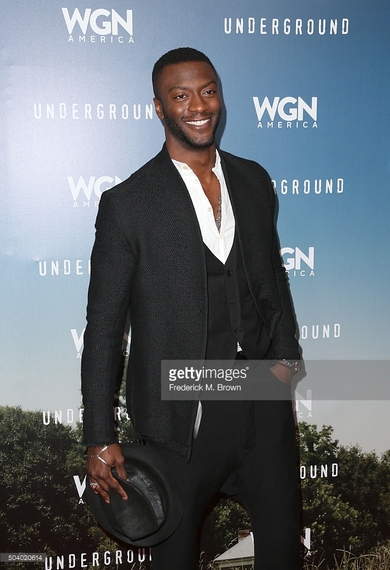 Aldis Hodge is no stranger to acting. In fact, Hodge started his career when he was just three years old as a model for commercials and print ads. From there, both he and his brother Edwin were cast on "Sesame Street", and later landed an opportunity on Broadway in the Tony-winning revival "Showboat", and as they say, the rest is history. Simply put, Hodge was born a star, and his destiny was to be on our television and big screens.

We have seen Hodge in television roles such as "CSI", "ER", "Bones", "The Walking Dead", "City of Angels", "Cold Case", "Girlfriends", "Friday Night Lights", and the list continues to go on. However, he may be better known for his role on "Leverage". Hodge has been doing what he does for a long time due to the early start of his acting career. The fact is, the best is still yet to come for this amazing actor, and we are anxiously awaiting to see what's next.

I had an opportunity to catch up with him to discuss his acting career, to laugh a little with him in between our chat, because he is quite the comedian, and to discuss what's next for him in his upcoming roles.

Who inspired you to begin your dream of acting?

It was a cross between my brother and batman. My brother wanted to be an actor first. He was three years old telling my mother that he wanted to be in a box, and by box he meant the television. He was doing a job, I believe it was an Ebony magazine photo shoot and they needed an extra kid. I was three at the time, and my mom asked me if I wanted to do it, and at first I was like no. She was like look, if you do this job, I'll give you a batman toy. So I was like let me rethink this. I did the job and got my batman toy, and I kept doing the jobs specifically for batman toys. That's how the first ten years of my career went.

What has been your favorite role and why?

Oh that's tough. That's really tough. I don't know if I can really compare. When I did "Leverage", I was twenty-one when I started that, and it was the entrance into where I'm at now. I've been in this business since I was three years old, and work has come in stages, but "Leverage" is where I really found my comfort as an actor. Taking that lead role responsibility is where I really found a bit of my confidence. Although "Underground" kind of takes the cake. It's been the proudest work that I've ever done in my career, and it's been the hardest work, but some of the most fun that I've ever had, and I really think that what we did is going to be substantial. It was really tough, but I think "Underground" may be it right now.

Tell us about your role in "Straight Outta Compton" which won an NAACP Image Award.

"Straight Outta Compton" was cool. It was a fun experience. It was hard work. We found our strength together as a group just from our strength and comradery off screen because we had those nights where we were like look we've got to get it right. We didn't know if were doing it right because there's a lot of pressure around the legacy of who NWA was back then and still is today, so it was fun but it was a lot of work because we didn't want to mess it up. Also for the fans coming into it, because there were a lot of younger fans and there were a lot of older fans who experienced this, so we didn't want to be the guys who ruined that experience for the fans. For us, we just kept a keen eye to the kind of work that we had to put into it and it turned out to be what it turned out to be, and it was great. It was a pretty nice experience and I'm happy for that.

You mentioned "Underground" which is premiering on March 9th. What can we expect to see in this series?

So people generally understand that it is the subject matter or the big elephant in the room, or rather the fact that it's about the Underground Railroad which is set in 1857. We are dealing with impoverished times and enslaved people trying to run 600 miles to fight for freedom. Basically, we feel like maybe we have seen this before, but the beautiful thing about this or most exciting thing about this series is the way that we do it. This is nothing that we have ever seen before, ever. It's truly an adventure from start to finish. I mean, from the very first scene you realize that you are kind of strapped to your seat going 100 miles per hour because we really engage the true identity of who these people are as people and not so much in the sense of them being slaves. I think there's a difference in the dichotomy between words. People say slaves and that kind of takes ownership of something, this is who I am, this is what I do, but we see it from the perspective of these people being enslaved and giving someone accountability of having done this to them. You get a chance to understand their hopes, their dreams, and the fact that they still find moments to love, laugh, and enjoy themselves. There are also those moments where they have to fight for themselves, but there are so many perspectives going on within the show because there are characters who want to fight for freedom but they are afraid to, and then there are enslaved characters who don't believe they are worthy of being free. You also have some of the white characters who believe in slavery wholeheartedly, and then you have other white characters who don't believe in slavery at all who are the abolitionists who are fighting on our behalf as well. But you truly see the potential of who these people are as a culture, the enslaved Americans. You can get the honest perspective of them being Americans who are enslaved by other Americans.

Talk to us about what it was like working with Tom Cruise in your role in the upcoming sequel to "Jack Reacher".

You can expect what you got in the last Reacher times ten. In this one, they went in. Working with Tom was great. He comes with so much experience. I've been in this game almost 27 years now and the one thing that I've learned is that you're a constant student and you're always learning. Tom is a natural teacher and a natural leader. He gets on set and he makes sure the entire team is good. He speaks to everyone and gives everyone respect. He's also a producer so he's trying to get the best product and he knows the only way to do that is to make sure that your team is working at their best. That really comes from giving them respect and making sure that they understand their values and I think that is something that he does well.

Be sure to check out Hodge every week on the series "Underground", a drama about slavery and the Underground Railroad which is set to premiere on WGN America, Wednesday March 9th 10/9c. Also be on the lookout for the sequel to "Jack Reacher" later this year, "Jack Reacher: Never Go Back" with Hodge starring opposite of Tom Cruise.