Alec Baldwin and his wife Hilaria Baldwin attended the late "Sopranos" actor James Gandolfini's funeral Thursday morning, but while they were among mourners at the New York City church, Hilaria's Twitter account appeared to remain active. After a report from the UK's Daily Mail detailing as much, Baldwin launched a Twitter rant against the publication's writer who produced the piece -- and used several gay slurs in the process.

During the funeral, tweets were sent from Hilaria's account asking followers for wedding anniversary ideas and retweeting @RachaelRayShow's updates about her Thursday morning appearance.

A source close to Hilaria insists to The Huffington Post that she merely later retweeted updates that had been tweeted during the service and was not actively tweeting inside the church.

Baldwin's publicist, Matthew Hiltzik, who says he still represents the actor, despite Baldwin having tweeted "I don't have a publicist anymore. I fired them," sent HuffPost the following statement:

"It is disgraceful that this reporter manufactured a story and never called for comment or explanation -- especially when it needlessly diverted attention away from a day to honor the memory of a beloved figure like Mr Gandolfini."

Below, a screenshot of Baldwin's now disabled Twitter account which displays his rant against reports that his pregnant wife was not fully present at the funeral. 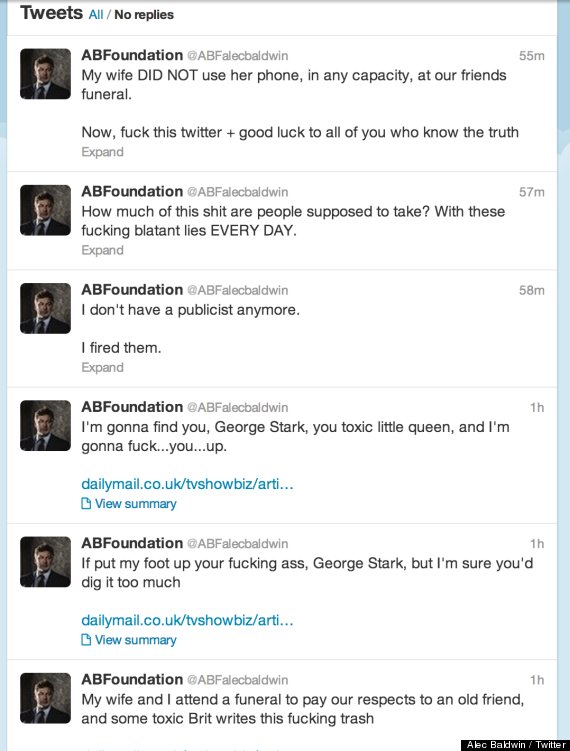