Amid an exodus of more than 100 corporations from the American Legislative Exchange Council (ALEC), Common Cause and the Center for Media and Democracy sent federal authorities new evidence last week, that ALEC is a corporate lobby masquerading as a charity at the expense of taxpayers and voters.

The IRS Whistleblower Complaint exposes ALEC's misclassification as a 501(c)(3) public charity with a mountain of evidence that the group exists to bring its members -- 2,000 state legislators and hundreds of corporations -- together behind closed doors to develop and push model state legislation.

While ALEC functions as a tax-exempt charity, its corporate funders can deduct their donations on their corporate tax returns, effectively gaining a taxpayer subsidy for their lobbying. And because ALEC's corporate members pick up the tab for travel, hotel, meals and entertainment for state legislators attending the ALEC conferences where model legislation is hatched, the scheme has implications for lobbying disclosure, gifts disclosure, and ethics reform on the state level.

ALEC is the hidden force behind a bevy of bills that have swept through state capitols on a range of hot-button issues. Its "Right-to-Work" laws have undercut the collective bargaining power of unions; its voter-ID laws have erected barriers to voting by college students, seniors, and low-income citizens; its "Stand-Your-Ground" laws gained national attention in the aftermath of the Trayvon Martin shooting case; its "No Sanctuary Cities for Illegal Immigrants" laws encourage local police to engage in racial profiling; and its fracking laws limit public disclosure of toxic chemicals used to extract natural gas.

The IRS Whistleblower Complaint attacks ALEC's form rather than its substance however.

ALEC would qualify as a tax-exempt organization under the tax code if it were "organized and operated exclusively for ... charitable ... or educational purposes ... [and] no substantial part of [its activities] is carrying on propaganda, or otherwise attempting, to influence legislation ...."[1] According to the regulations, an "organization is not organized or operated exclusively" for these purposes "unless it serves a public rather than a private interest."[2] Moreover, an organization attempts to influence legislation if it advocates "the adoption or rejection of legislation."[3]

The new trove of evidence released last week adds to a record of nearly 4,500 pages of documents in the IRS Whistleblower Complaint. The new evidence includes:

The IRS Whistleblower Complaint calls for an immediate investigation, revocation of ALEC's 501(c)(3) status, the imposition of necessary civil and criminal penalties, and collection of unpaid back and present taxes for corporate lobbying that is inconsistent with ALEC's tax-exempt status.

Groups like the Salvation Army, Make-A-Wish Foundation, and the Red Cross come to mind when most of us think about charities. ALEC is something far different, a shadowy operation that brings legislators and corporations together behind closed doors to advance private interests. While our Complaint focuses on federal issues, ALEC's carefully-shrouded activities highlight the need for reform in the states to ensure that perks related to lobbying and gifts are fully disclosed.

Help us Blow the Whistle on ALEC. Urge the IRS to immediately investigate ALEC's operations and hold ALEC and its corporate funders accountable by following this link. 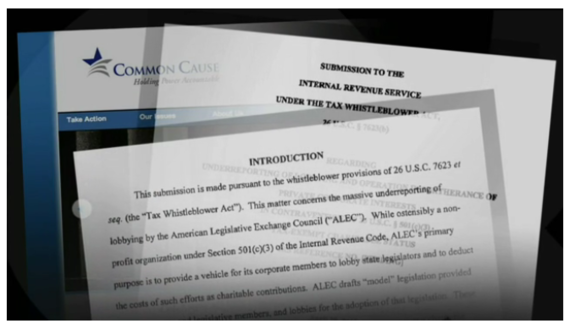 Legal Associate for Common Cause in Washington, D.C.