"Twenty-five states had passed legislation eliminating or reducing state commission authority over telecommunications by the end of the 2012 legislative sessions. By the end of 2013, this number could increase significantly, given the legislation pending in states across the country. Legislation reducing regulatory oversight (or clarifying the deregulation initiatives passed earlier) was proposed in 20 states during the 2013 legislative session... Should the majority of the legislation pending in the 2013 sessions be enacted, nearly 70% of the states will have significantly reduced or eliminated commission jurisdiction over retail telecommunications services."

Starting in 2007, AT&T, Verizon, Centurylink and the cable companies, working with a group called the American Legislative Exchange Council (ALEC), created state-based model legislation and principles designed by the companies to accomplish one thing -- the removal of all regulations, obligations and oversight on the companies' businesses. As the NRRI report outlines, 25 states have removed some, if not all regulations and oversight, and there are more to come in 2013. 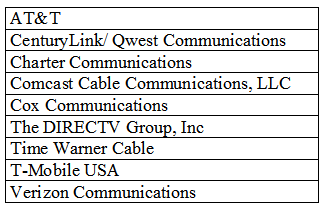 We note that Sprint/Nextel left ALEC in 2012.

Moreover, the incumbent phone companies were supposed to compete with each other for wireline/broadband services as each merger to make these companies larger was based on commitments to compete out of region. Now it's all one, big, happy family.

However, what is startling is that the three largest phone companies, covering almost every state, are now all working together using the exact same principles, talking points, legislation and even lobbying groups, such as ALEC. The ALEC state senator in Wisconsin or Florida or Connecticut all are working from the exact same playbook and are being supported by very deep pockets of companies that should have been competitors, not collaborators.

The public's side? There is no other serious side with these resources, much less a national plan.

On July 13, 2011, Center for Media and Democracy (CMD) released a massive collection of leaked documents from the American Legislative Exchange Council, (ALEC) --- hundreds of model bills and resolutions that were previously voted on by ALEC corporate members and ALEC member politicians behind closed doors.

As Bill Moyers, Common Cause and others have outlined, the corporations are in the room with waiting and willing politicians who are members of ALEC and almost all of whom receive money from the corporations in the form of campaign financing; many also receive grant/foundation monies for their districts, making them look good.

In communications, the model legislation was designed by ALEC's "Communications & Technology Task Force".

The group has created a model bill for every occasion - from blocking municipalities' ability to offer competitive services even when the incumbent is a no show, or blocking net neutrality, where the companies can interfere in some way with the customers' broadband and Internet service. Many of these pieces of legislation have been around for six years or more. Here is a sample of the bills and resolutions.

Meanwhile, ALEC has also put up some of these bills on their site as of this writing.

The State Communications Legislation and ALEC

There are two major ALEC model bills that have been used in this campaign to close down America's communications utilities - the PSTN - and customer obligations and oversight.

John Stephenson, Director of the ALEC Communications and Technology Task Force Testified before the Kansas House Committee on Commerce, Labor, and Economic Development (regarding House Bill 2326, February 18, 2013) and made it clear that the Florida and Indiana laws were based on ALEC model legislation.

"In 2007, ALEC members grew concerned about the status of VoIP and sought to develop policy to protect the technology from antiquated regulation so it could thrive. At the same time, our members sought to preserve the appropriate federal and state balance of responsibilities towards consumers. Therefore, ALEC adopted as our policy towards VoIP elements from laws enacted in states like Florida and Indiana. Our model Advanced Voice Services Availability Act exempts interconnected VoIP service from state utility regulation, but also preserves several rights and responsibilities for states and providers."

Florida, Indiana and Kansas are all AT&T controlled states.

Meanwhile, CMD's PR Watch details the signing of an ALEC inspired Wisconsin bill, (another AT&T state) dealing with the removal of regulations that was based on a bill called the "Regulatory Modernization Act".

"On May 23, 2011, Governor Walker signed into law one of the first bills he requested, a radical deregulation of the telecommunications industry in Wisconsin. Under the bill, the Wisconsin Public Service Commission (PSC) could no longer set telecommunication rates to keep prices low for consumers, perform audits of providers, or investigate consumer complaints. It guts the PSC's authority to regulate rates of basic phone service in areas with little or no competition."...The bill tracks ALEC's "Regulatory Modernization Act" which prohibits any commission from regulating rates and charges, terms and conditions of services, mergers or acquisitions and more."

Basic Principles of these Acts

Though it varies by degree, there are basic principles for these state deregulatory campaigns:

The ALEC Regulatory Modernization Act. from 2009 is much more odious as it strip-mines almost all regulations and oversight. Here is the exact language from their model legislation. It says, after the first year, the state commission shall not exercise jurisdiction over phone service. It can't examine the rates being charged, the terms and the condition of the service; it can't examine quality of service or most importantly can't do anything if the company decides to 'exit' the business - i.e.; stop providing service.

"Section 6. Basic Telecommunications Service - Long Term Beginning one year after the date the written election is submitted to the Commission pursuant to Sec. 1, the rate transition period ends and the Commission shall not thereafter exercise jurisdiction over basic telecommunications service of the Electing Provider, except as expressly stated in this Act, including but not limited to rates and charges, terms and conditions of service, filing of schedules or tariffs, market entry or exit, depreciation requirements, quality of service, long term financing arrangements or other obligations, asset sales, mergers or acquisitions or any other aspect heretofore subject to the jurisdiction of the Commission."

As we know from ALEC's own words, the Florida legislation is directly based on ALEC principles. Passed in 2011, it is a shining example of corporate influence as the state legislation is simply a reworded lift of the ALEC bill; even the name reflects the ALEC influence.

If you attempt to read through it you will probably get a headache; while parts of it sound like the state legislators are making sure that the state commission is functional and the State's customers are protected, much of the language is either later deleted or phrased in a way to confuse the real purpose - gut all regulations, obligations and oversight.

It starts with the claim that the Florida commission has "exclusive jurisdiction in all matters... in regulating telecommunications companies".

"1) The Florida Public Service Commission shall exercise over and in relation to telecommunications companies the powers conferred by this chapter.
"(2) It is the legislative intent to give exclusive jurisdiction in all matters set forth in this chapter to the Florida Public Service Commission in regulating telecommunications companies, and such preemption shall supersede any local or special act or municipal charter where any conflict of authority may exist."

Sounds great until you find that the Florida law makes a list of all of the services that the Commission does not actually have oversight over, which includes all services, including - "basic service".

"Section 3. Section 364.011, Florida Statutes, is amended to read:
"364.011 Exemptions from commission jurisdiction. The following services are exempt from oversight by the commission, except to the extent delineated in this chapter or specifically authorized by federal law.
(1) Intrastate interexchange telecommunications services.
(2) Broadband services, regardless of the provider, platform, or protocol.
(3) VoIP.
(4) Wireless telecommunications, including commercial mobile radio service providers.
(5) Basic service.
(6) Non-basic services or comparable services offered by any telecommunications company

With the removal of all services from purview of the state commission, this law essentially removes the 'carrier of last resort' obligations as the state can't say a thing if the company fails to provide service or that the quality of service has deteriorated.

And as a match up to the ALEC Regulatory Modernization Act, it states that "the Commission shall not thereafter exercise jurisdiction over basic telecommunications service..."

More tricky, The law states that the commission should have all records that are reasonably necessary, then in the next section crosses out any of the useful information - gutting the State's ability to do most investigations, such harms to customers caused by the various affiliates of the utility, such as the online or broadband side of the business, something we outlined was happening the Verizon states.

And the gutting of the original law also removed obligations to bring competition into the mix. It deleted whole sections including:

DELETED LANGUAGE: "(f) Eliminate any rules or regulations which will delay or impair the transition to competition.
(g) Ensure that all providers of telecommunications services are treated fairly, by preventing anticompetitive behavior and eliminating unnecessary regulatory restraint".

I note that in the ALEC state-based model legislation they defer the question of supplying wholesale services to competitors to the FCC's jurisdiction ---(AT&T's FCC petition completes this circle by attempting to remove all obligations to competitors.)

The communications cabal and ALEC's plan is clear; The next step is to bring the state-based model legislation to the FCC and Congress. ALEC's attack plan was laid out in a story by Communications Daily:

"This is a clarion call for Congress and the FCC" to reform the Communications Act, the American Legislative Exchange Council's John Stephenson told us. "It's showing the federal government a possible way forward on communications law." Stephenson, director of ALEC's Communications and Technology Task Force, counts at least 26 jurisdictions that recognized the need for what he calls a "new regulatory framework," no longer from the Ma Bell era."