For three years photographer Alejandro Guijarro traveled from one quantum mechanics institute to another, exploring the scientific havens that serve as home to some of the world's greatest thinkers. In search of images that would provide a glimpse into the mysterious realm of physics, Guijarro captured portraits of the blackboards proudly displayed in lecture rooms across the globe. The resulting snapshots, titled "Momentum," appear like windows into the minds of modern day geniuses, toeing the line between artifacts of human progress and abstract works of art. 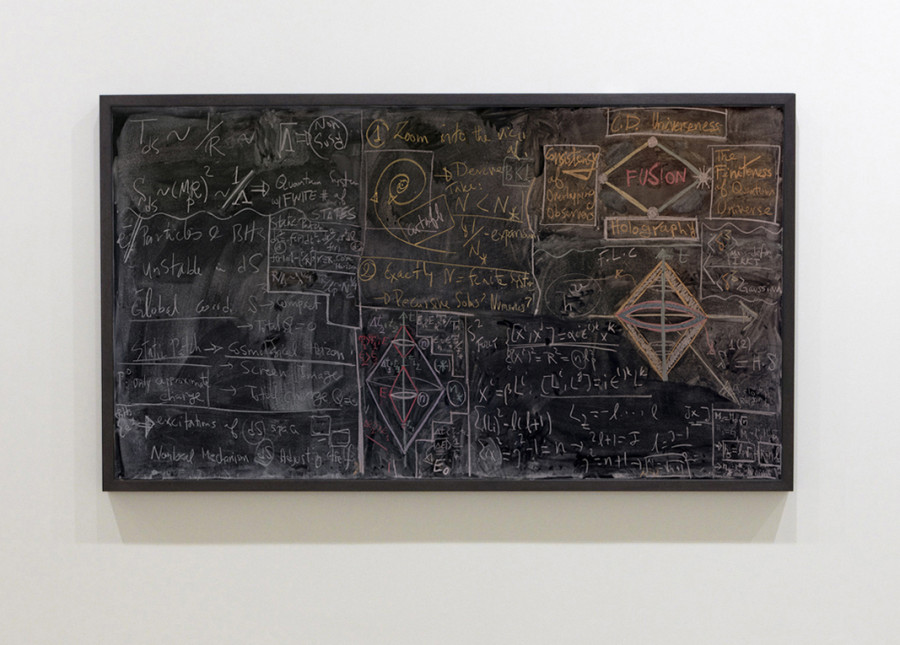 Guijarro's adventures have taken him to Oxford and Cambridge in the UK, UC Berkeley, Stanford and SLAC (The National Accelerator Laboratory) in America, CERN in Switzerland and the Instituto de Física Corpuscular in Spain. Each visit was a new experience, as he sought to photograph the blackboards without interference, freeing the swirl of numbers and symbols from their frames, and exhibiting the images that remain with very little explanation.

"At this stage they are documents," Guijarro explained to The Huffingtno Post. "Once removed from their institutional beginnings the meaning evolves. The viewer begins to appreciate the equations for their line and form. Color comes into play and the waves created by the blackboard eraser suggest a vast landscape or galactic setting."

He draws parallels to Jean-Michel Basquait's "formulaic language" and Cy Twombly's later canvases, noting that his particular masterpieces were created by scientists unaware of their artistic merit. What began as precise messages -- equations meant to illuminate the very real possibilities of the natural world -- end up, in the hands of Guijarro, as objects of contemporary photography. The lines and shapes hold secrets known only to the few who speak the language of quantum mechanics, but simultaneously appeal to the aesthetic-hungry viewers who appreciate the excitement of an objet d'art.

"These are not works that pretend to hold any kind of objective truth. Stripped of their wrapping they are photographs of large drawings! Yet the process of finding, documenting and collecting them has a transmutational effect," Guijarro added. "'Momentum' can be seen as an attempt to bridge the gap between science and art."