Growing up in Brazil during the 1980s, he associated real flavor with his country's Amazonian past rather than its sleekly cosmopolitan present. Although he later spent years in Europe training at culinary school and in Michelin-starred restaurants, he relied on his taste memories of childhood visits to the jungle with his father and grandfather for inspiration when he opened his flagship Sao Paolo restaurant D.O.M. in 1999. He was the first chef to successfully bring traditional Brazilian food into the 21st century.

Atala's mission is very different from many of the molecular gastronomy-obsessed chefs who long dominated that list. He, along with Rene Redzepi of Noma, Heinz Reitbauer of Steirereck and Sean Brock of Husk, is part of an informal cadre of chefs who serve a kind of food you might call "new historicist cuisine." They scour vintage cookbooks in search of old recipes to revive for modern diners rather than poring over chemistry textbooks to invent futuristic new techniques. They forage for unusual-tasting grasses their ancestors ate in the 18th century instead of pillaging PepsiCo's larders for chemicals to stabilize their foams.

So, when asked for a Chef Shortcut, Atala provided one from deep in culinary history. It's a "simple and brilliant" method for cooking soft vegetables -- especially asparagus and peas -- he found in the 19th-century French cookbook "Cuisine Bourgeoise." Atala says it solves all the problems of other common asparagus cooking techniques.

"If you boil it, asparagus loses its flavor in the water, like a bag of tea," he said. "You can try to maybe bake it -- but then it becomes too dry. And maybe not so tender. You can try to pan-fry it, but then it also loses lots of water. And if you don't add a lot of butter, the flavor will go away as well."

They were quite possibly the best peas and asparagus I've ever had -- and I cooked them in the middle of winter in New Jersey. If the vegetables had been in season (as they are in Brazil), they would surely have been even more spectacular.

You can find tons more terrific tips, recipes and stories from Brazil in Alex Atala's beautiful cookbook "D.O.M.," which was released in the U.S. this past fall.

"You can use this technique with any vegetable," Atala said, "As long as it doesn't require too much water or too long a cooking time."

That means that most root vegetables and tubers -- like potatoes, turnips and carrots -- are out. Atala said it works best with asparagus and peas, so that's what I made. If peas and asparagus were in season where I lived, I might have cooked them plain, as Atala recommends, but I wanted to compensate for my imported asparagus and frozen peas with some extra flavor. I added diced shallots, salt, pepper and olive oil to the asparagus: 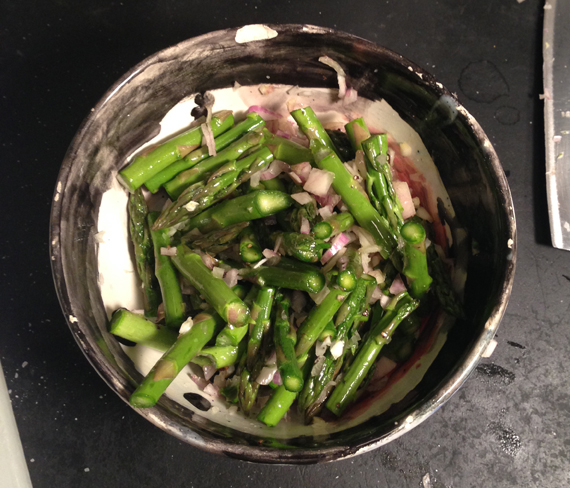 ...and lemon zest, minced tarragon and butter to the peas: 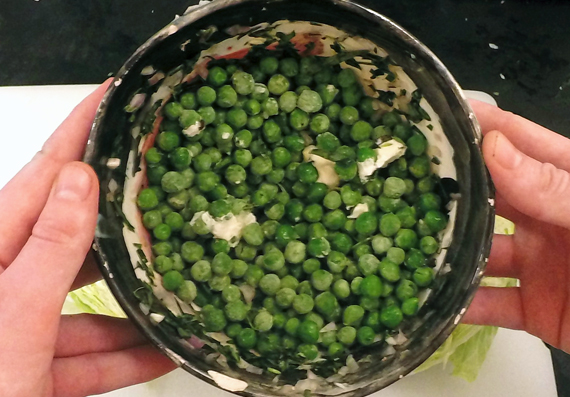 Atala said that the technique lends itself well to any sort of seasoning, but he noted that fat -- like the butter and olive oil I used -- is not strictly necessary. "That makes it a very healthy technique," he said.

3. Halve a head of iceberg lettuce

Resist the temptation to use a more upscale breed of lettuce, like butter or Bibb. Unfashionable iceberg works well because it's hardy and has plenty of moisture. 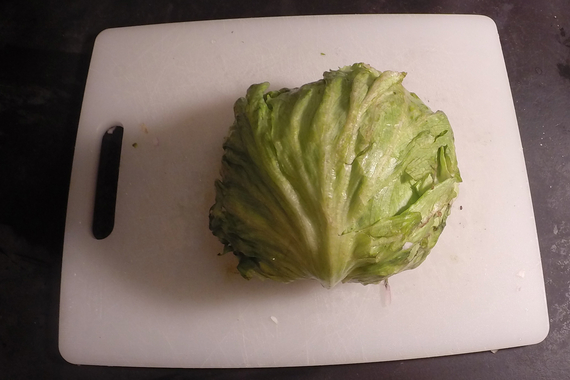 Cut the head of lettuce from the top down to the root.

You want to be able to lay it flat on its side, so if the lettuce head is as asymmetrical as most are, try to cut it along its longest axis, like so:

Carefully cut out several inches of leaves from the center of the lettuce halves, making sure to cut deep enough into the head to give yourself plenty of room for vegetables, but not so deep that the remaining lettuce is too puny to insulate the vegetables from direct heat. 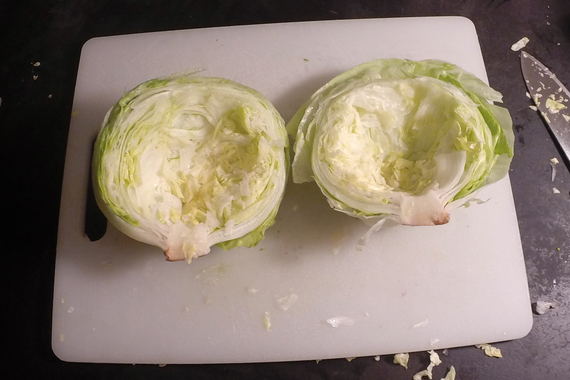 5. Fill the lettuce shells with the vegetables

Using a spoon or your hands, stuff the lettuce with the vegetables you prepared.

You're aiming to make the filling exactly flush with the rim of the lettuce shell; any less is a waste, but any more will make it hard to close the head up again. 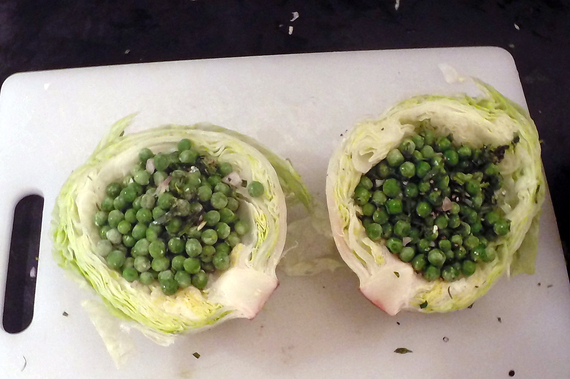 6. Close the lettuce head and tie it with some kitchen twine

You have to move pretty quickly to close up the brimming halves of the lettuce without spilling any vegetables.

Then tie a bit of kitchen twine around the sealed head to keep it securely closed.

7. Put the lettuce heads on a cookie sheet and bake until the vegetables are al dente, approximately 45 minutes. 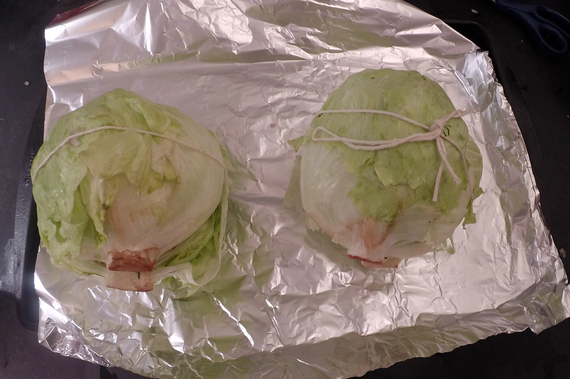 (For what it's worth, Atala told me he only cooks the heads for about 20 minutes. But when I took the vegetables out after 20 minutes, they were still essentially raw. Maybe his ovens are much more efficient than mine, or maybe he likes his veggies cooked very rare -- but I had tremendous success after leaving the heads in for about 45 minutes.) 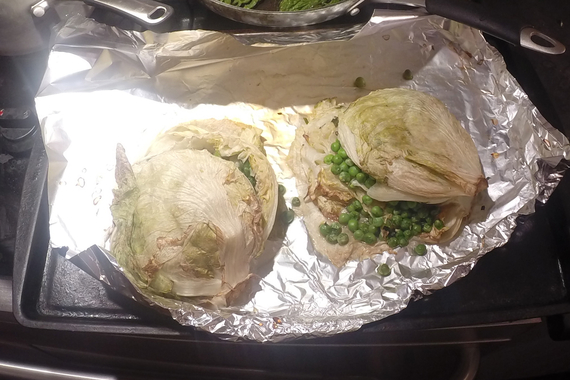 8. Remove the vegetables from the lettuce head

The lettuce will have softened considerably in the oven, so be careful when picking it up. 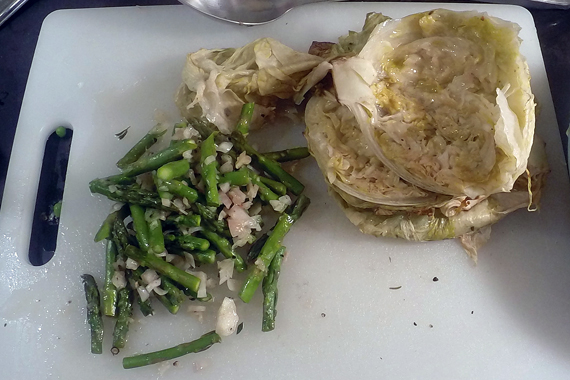 For curiosity's sake, I cooked half of the asparagus and peas I had on hand using the most basic method around: boiling. Here's a comparison of the lettuce-baked veggies at top with the boiled ones below: 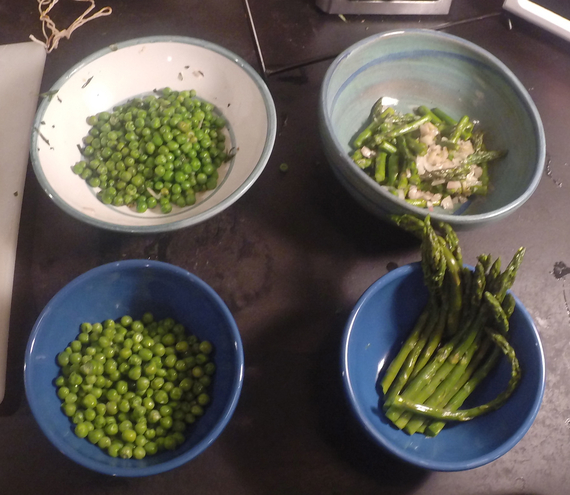 The lettuce-baked ones had more flavor, a crisper texture and a more appealing shade of green than their sad, boiled companions.

9. Serve the vegetables on a bed of cooked, chopped lettuce (optional)

Here are the finished dishes: 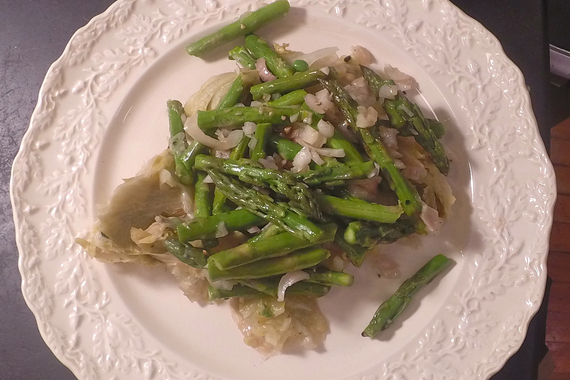 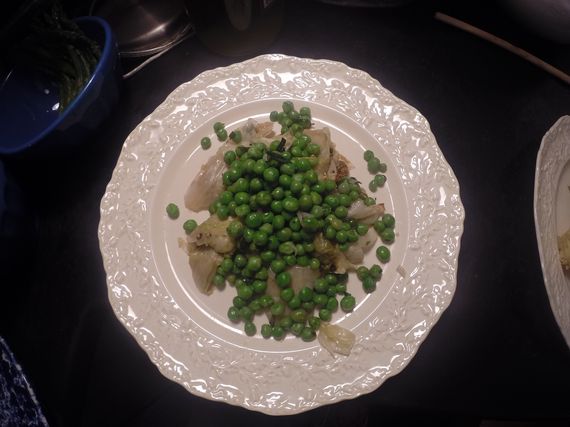 Chef Shortcuts is a new weekly cooking series on HuffPost Taste in which I will ask some of the world's best chefs to share one great tip, one cooking technique they've learned in all their years in professional kitchens. Then, I'll test them out at home! The idea is to discover shortcuts that will help you create restaurant-worthy dishes every night of the week. Chef Shortcuts will appear on HuffPost Taste on Monday mornings.