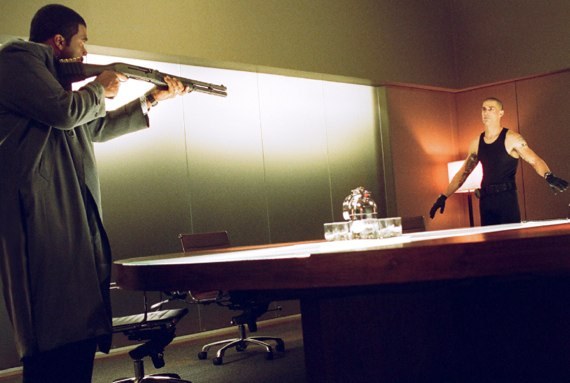 As you're reading this, a very bad movie that goes by the title of Alex Cross is playing in a theater somewhere near you. Alex Cross stars Tyler Perry (Star Trek) as the man who has his name in the title of this very bad movie. Is there any fathomable reason that you should spend the money that you earn, working a job that you don't particularly care for, just for chance to have some semblance of enjoyment in your free time (and food), on this movie? As a service to you, we answer every question that you could possibly have about Alex Cross.

Q: Is there any reason that I should see Alex Cross?

A: Yes. Because, from now on, anytime Matthew Fox's name is mentioned, the response will be, "Was that pre-Alex Cross or post-Alex Cross?"

Q: What does that mean?

A: That his performance as a professional hitman should have just been a throwaway role in a bad movie for Fox.

Q: Do you have any bad analogies to help me understand better?

A: Let's just say Fox's performance in Alex Cross is the equivalent of a beer league softball player sending the second baseman to the hospital after sliding with raised metal spikes in an effort to break up a double play. I mean, sure, the effort is noticed, but it just leaves everyone else on the field scratching their heads while saying, "What the fuck is wrong with you, man?"

Q: Who is Alex Cross?

A: Alex Cross is a Detroit police detective who has a reputation as a bit of a super sleuth.

Q: How do we know that Alex Cross is a super sleuth?

A: At one point Alex Cross determines that his wife had an espresso because he notices a huge espresso stain on her dress.

Q: What are the odds that the people who keep telling Alex how good he is are just humoring him?

Q: Wait, haven't I seen this Alex Cross in a movie before?

A: Yes. Morgan Freeman played Alex Cross in both Kiss the Girls and Along Came a Spider.

Q: Who is better in the role of Alex Cross? Morgan Freeman or Tyler Perry?

Q: What crime is Alex Cross trying to solve in Alex Cross?

A: Cross, along with his partners Tommy (Ed Burns) and Monica (Rachel Nichols) - who are having a relationship -- are investigating a mass shooting at a mansion in which a high level executive was tortured by cutting off her fingers, then murdered, by a criminal known as "Picasso" (the aforementioned Matthew Fox).

Q: Is he called Picasso because he cuts off body parts?

A: First, you're thinking of Van Gogh as far as body parts are concerned. Second, he's called Picasso because he has a habit of sketching drawings at his crime scenes and leaving them behind as clues.

A: No, you're thinking of Jeff Fahey. But Fox and Fahey did star on Lost together.

Q: What kind of clues do the paintings possess? Did they contain deeply hidden messages that would take the keen eye of a master detective to solve?

A: In one instance, the painting could be folded in a way to create another image that revealed a set of initials.

Q: Is Alex Cross a good movie for women characters?

A: Pretty much every single female character in Alex Cross winds up brutally murdered. So, no.

Q: What's an example of how ridiculous this movie is?

A: As mentioned, Tommy and Monica are involved in a relationship, but this is not allowed under company policy and they are afraid to tell Alex. Later, Tommy confesses to Alex, which results in a long lecture from Alex about how either Tommy or Monica will need to leave the team because it's just too dangerous and Alex is not about to take any risks with a new child on the way. When the subject changes - still part of the same exact scene -- Alex then tells Tommy that he's leaving the team to take a job with the FBI.

Q: I'm not convinced. What's another example of how ridiculous this movie is?

A: For Picasso's first murder of the film, he gains entrance to a business executive's highly guarded house by (deep breath): Posing as an MMA fighter at a fight the executive happened to be at, brutally winning that fight, catching the fancy of the executive even though he just broke a man's arm, then being left alone with that executive in a bedroom even though he's obviously a very dangerous man. This was Picasso's plan. And it worked. Later, he cuts all of her fingers off.

Q: At any point does Tyler Perry yell the catchphrase, "I am your attorney!" after a criminal requests an attorney?

Q: How is Tyler Perry's acting in Alex Cross?

A: I mean, look, it's Tyler Perry. And for Tyler Perry, he's ... fine, assuming your point of references on the spectrum of acting are other Tyler Perry movies. Put it this way: This movie is just so bizarre and terribly made that, well, I promise that you will not be worried about Tyler Perry's acting ability either way.

Q: If you're going to be blurbed in this weekend's commercials for Alex Cross, what quote do you think will be used?

A: "I promise that you will not be worried about Tyler Perry's acting ability." -- Mike Ryan, The Huffington Post

Q: Is Alex Cross one of the worst movies of the year?

Q: How many Lord of the Rings references are in Alex Cross?

Q: How many Harry Potter references are in Alex Cross?

Q: Do you hope that the sequel to Alex Cross is titled Totally Crossed Out?

A: No, because that particular spelling of "Cross" would need to be done with a "K" if we are staying true to Kriss Kross' original vision. Also, it appears the sequel is already titled Double Cross.

Q: How many people were in the theater to see the Friday morning, 10:45 a.m. showing of Alex Cross on the Upper East Side of Manhattan?

A: Including me, seven.

Q: How many times during Alex Cross did you distract yourself from the movie by envisioning the thought of turning in your resignation so that you would never have to see a movie like Alex Cross again?