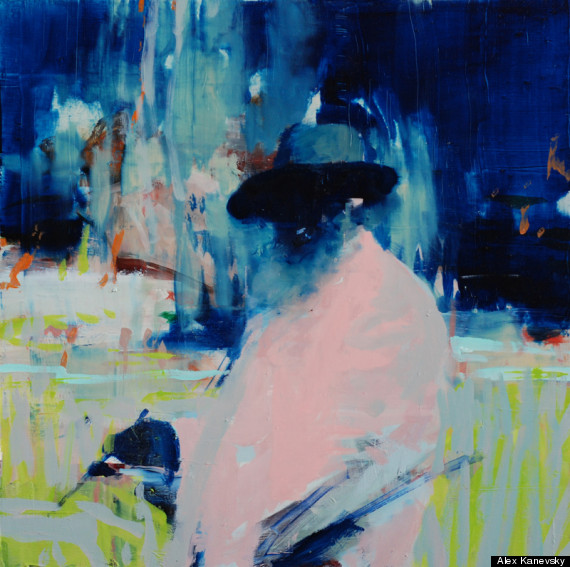 Alex Kanevsky's paintings don't depict a moment in time, but the mysterious space before, after and during an event. The Russian-born painter attempts to capture the evasive nature of memory and the poetry of failure. His figurative works provide more questions than answers, from his portrayals of anonymous twins submerged in adjacent tubs or Claude Monet gardening in a psychedelic wash of paint. To find out more, we reached out to Kanevsky. Scroll down for images.

HP: How would you describe your style and how has it evolved over time?

AK: I don’t know how to describe my style; I don’t think I have a style. In fashion, people have style. They are making a product -- pants, for example. These pants enter the field where there are many other people making pants. Fashion designers have a problem: how to stand out in the crowded field where everyone is making more or less the same thing. So they try to come up with a set of recognizable signature traits -- style.

Being an artist, I am not really in the business of making a product. Like everyone else, I have my own unique view of the world. As an artist I try to arrive at the extreme clarity of that view and then try to find visual means, capable of expressing this clarity. So, if my work has any recognizable traits, they are mostly a byproduct of always trying to be very clear and concise about my personal view of the world. You know, if you always trying to climb the same mountain, you will eventually be known as a guy who is always climbing that mountain.

AK: I love being an artist. Having a career would kill that joy. Career implies progress, some sort of goals and their accomplishment. I don’t have that. I have a stasis, not a career. What I am trying to do is very difficult for me, so there isn’t much of progress or accomplishment of goals. If there were, I would probably be disappointed and have to find something else to do.

I do have highs and lows, though. This painting probably is one of my personal lows. As you can see from the progress sequence, it went on for a very long time. It had stages when I should have left it alone, but I kept on pushing for something else that I wanted and it would not come. Eventually the painting "crushed and burned." It does not exist anymore. I remember that day -- definitely a low.

The highest points also have to do with individual paintings that were difficult, but eventually amounted to something resembling that extreme clarity of my view that I mentioned before. Paintings like these are happy occasions because they push the horizons a little more open and give you permissions to do what didn’t seem possible before.

AK: I am embarrassed of never having read "Ulysses" [in its entirety], as much as I like the book. I have never managed my way through the whole Bible, the book that consciously or subconsciously defines so much of the human behavior.