Though we experience being in them all the time, there is something oddly unsettling about crowds. Swarms of strangers brushing past each other, occasionally bumping into one another, all having arrived at the very same place. Despite the physical proximity, most members remain in their own worlds, ignoring or looking past the sea of bodies in their path. This space between clutter and isolation, familiarity and a strange, even threatening otherness permeates "A Face In The Crowd," the newest photography series from Alex Prager. 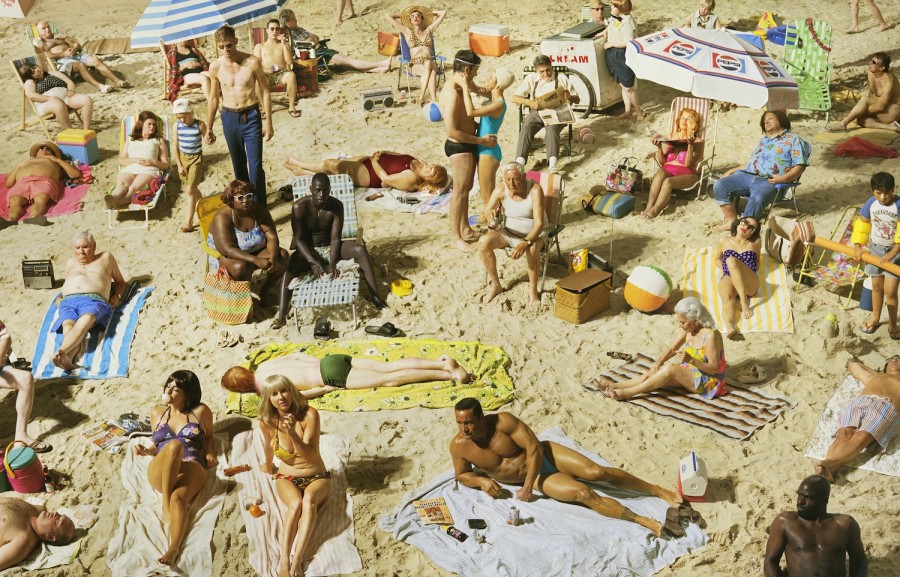 The Los Angeles-based photographer is known for her suspenseful cinematic images, which use staged, over-dramatized scenarios to reveal what lies beneath the artificial lights and gobs of makeup. Prager dresses her subjects in costumes from a variety of bygone eras, giving her characters the guise of cinematic fantasy without tethering them to a specific background. Viewers get the odd feeling they've seen this all before, and yet the scenes remain beyond their understanding. In this phantom realm, centered on the beauty of the surface, deeper realities creep into sight. The contemporary crowd is revealed to be a multiform beast made from sundry personalities, narratives, images and, these days, social media accounts.

While the photographs in Prager's exhibition dwell on the isolating residue of the crowd, her film, also titled "A Face In The Crowd," presents the crowd not as a series of individuals, but something greater. Prager creates a three-channel video installation, featuring inner monologues of select crowd members that reveals the struggles, memories and nightmares of that stranger who pushed you in line. Elizabeth Banks, the heroine of the film, wordlessly navigates the crowd, drawing the viewer through the mass of individuals in a frenzied and lonely state. The film journeys beneath the surface, illuminating the invisible stories and experiences that pack the empty space between silent strangers.

We reached out to Prager to discuss her upcoming exhibition.

There aren't many crowds in Los Angeles. How did you first become interested in the crowd as an artistic theme?

I've always been interested in individuals and characters. When I first started I was taking black-and-white photos of strangers who interested me on the streets. Weegee's photos were also a big inspiration for me. After my MoMA show in 2010 I started doing a lot more travel. Going through airport terminals, subways, living in London and New York for a while. Being from Los Angeles, which like you said, you aren't often thrown into situations where you're surrounded by strangers. You're usually in the car or around people you know. I felt like I saw crowds a bit differently than other people; it was a bit jarring. It's interesting when people are surrounded by each other, the feeling of being really close and all being there for similar reasons but also having your own agenda and your own intentions of why you're there. It can feel a bit isolating as well and since you're around so many people it exaggerates that feeling of isolation.

The crowd was introduced as an artistic trend in turn of the century Paris. Do you see the contemporary crowd as a different beast?

I think they're all connected because they're dealing with crowds but I think I'm commenting on them in a different way. Everything that's happened with technology and how people act with each other, communicate with each other, I think it's different now than it ever was. I'm the last generation that understands what like was like before the internet.

How much did you direct your crowds in terms of their facial expressions and emotions? How much is staged?

It's very directed before we start the shoot. I'll put people in position and give them some kind of character I want them to be. I will give the overall group a direction right before we start shooting, then I let people do their thing. I want it to be as natural as possible. I want it to feel staged to create that sort of isolation and disconnected communication but these aren't reenactments of real crowds. I don't want to show people what a crowd looks like. I'm creating the feeling of a crowd that has no substance to direct people to what's going on right now in our culture.

What drew you to Elizabeth Banks as a protagonist for the film in the exhibition?

I felt like I really needed an all-American looking girl who could lead people through these crowds and have us want to follow her. I didn't want her to be intimidating; I wanted her to be interesting, pretty, emotional and vulnerable. And familiar looking, I feel like she has a very familiar look to her.

There is something interesting about having a real movie star star featured in something that feels like a film we've seen before, though we haven't. It adds to your signature combination of familiar and alien. Is this a factor you consider when choosing your female protagonists?

Yes, in all of the pictures I use clothes from the past and gestures, makeup, hair from different time period to create a familiar, timeless identity for the work. I try to capture that same feeling in the movies. People are used to having a movie star type figure to lead a narrative so I thought that was necessary for my film. Also I need the strength of a movie star and also... [laughs] the acting skills.

In "Compulsion," you zoom up close to capture the eyes of your subjects. Here you zoom out to capture a flood of faces. Were there any unexpected outcomes of toying with perspective in this way?

I did want it to feel kind of voyeuristic, the same way I had that going on in "Compulsion." Somebody is watching from a disconnected viewpoint or a perspective that doesn't feel involved. Whether it be surveillance cameras or a person that feels isolated and alone within the crowd, I felt that perspective really worked. 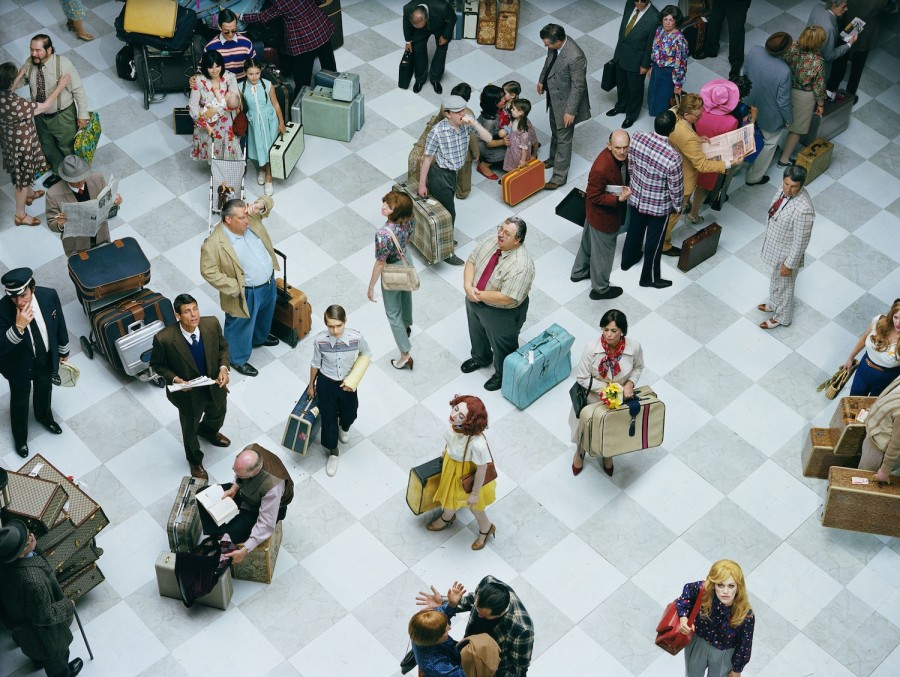 "A Face in The Crowd" will show at Lehmann Maupin from January 9 until February 22, and at M + B from January 25 until March 8.