Alexander Schaefer, the artist behind the "burning banks" series, was arrested Monday afternoon, the LA Weekly reports. The arrest of the artist whose popularity skyrocketed in the height of Occupy LA came less than two weeks after the clash between LAPD and Occupy protesters at the "Chalk Walk" demonstration.

Last week on his blog, Shaefer wrote: "I drew this on the public sidewalk in chalk at 9th and Hill in front of Chase Bank." Below the text read "CROOKS" in capital letters next to the Chase logo. A few feet away, the doors to the bank are visible, so patrons can see the text as they enter and exit the building. Today, Shaefer stepped it up and wrote "CRIME" in capitals next to the Chase logo. Apparently this act was so offensive something had to be done about it, so Shaefer was charged with misdemeanor vandalism...for drawing in chalk outside of a bank.

Not surprisingly, the artist is no stranger to bizarre police encounters. Last year, he wrote on his blog, "I started another burning bank painting today, this time the Chase branch in Van Nuys. I got lots of thumbs up and likes from passersby but after an hour and a half the cops showed up. They said someone called thought I might be a terrorist." The LA Times reported that officers showed up to Shaefer's home the next day, asking questions. The artist said the officers demanded, "Do you hate banks?"

You can see photos of the brush up today over on Ed Fuentes' blog here. In a phone interview with Shaefer on Tuesday after he spent 12 hours in police custody, the artist told HuffPost Arts he was just getting started with his chalk drawings. He said, "I need to serve 12 hours of chalking in front of every too big to fail bank, just to start racking up time. Meanwhile, Jon Corzine steals $1.2 billion and he's a free man." He continued, "I wanted to show an imbalance in the application of law enforcement and justice; our political leaders aren't addressing this at all."

What do you think, readers? Should "misdemeanor vandalism" charges really be applied to chalk drawings? Let us know in the comments section below.

See a slideshow of the arrest below. All photos were taken by Rush Varela.

Update: Here's a video Shaefer released on his blog today with footage leading up to and including his arrest, in which Schaefer expresses the importance of civil disobedience. At the end of the video he thrusts a stick of chalk forward, urging viewers to "do this at the place where they are committing the crime." 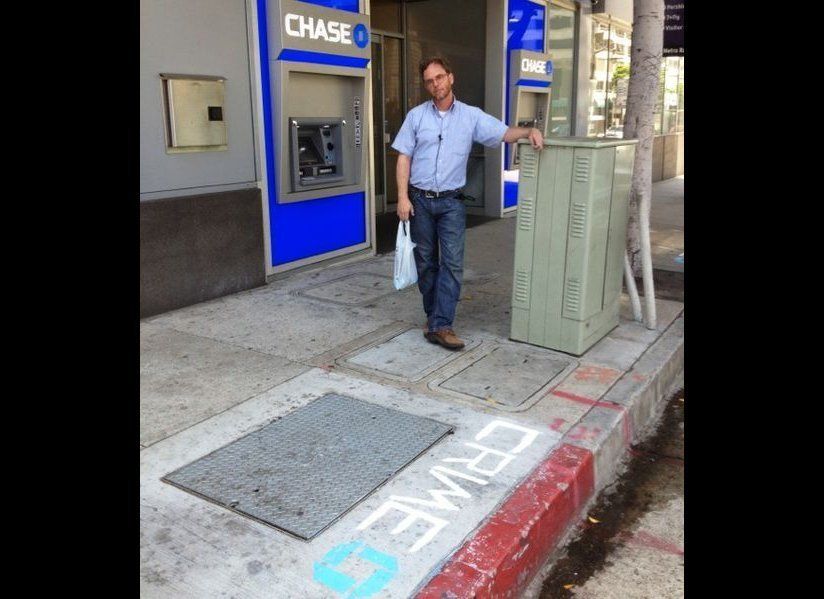