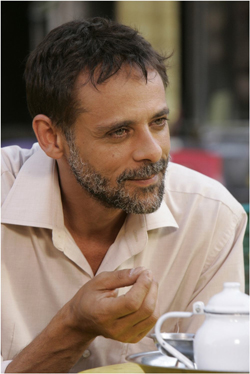 If you fell in love with the soft-spoken, lanky Tareq in Ruba Nadda's indie summer hit Cairo Time then you are familiar with the elegant charm of Alexander Siddig. Or you may have been watching him lately on the newly revamped BBC America series Primeval, in which he plays scientist Philip Burton. But later this March he will be returning to the big screen in all his understated charisma as Jamal, the unselfish, supportive father in Julian Schnabel's Miral.

I meet Siddig in Doha, Qatar, where he is promoting Miral, the latest Julian Schnabel film which has had more than its fair share of criticism. Things are quite different at screenings throughout the Middle East -- the film was at the Abu Dhabi Film Festival in October -- where Miral has been receiving standing ovations. The story of the film, and the book by Rula Jebreal on which her screenplay is based, is one of strength and dignity in the face of adversity. A statement that could well apply to Siddig himself. Though his eyes may sparkle with an almost otherworldly beauty and for our meeting he elegantly wears a crinkled light blue cotton shirt with cuff-links, a pair of beige chinos and tan loafers, I can't help but notice a tragic hero quality in him. Granted, hidden well behind his broad smile and glowing caramel complexion the color of a perfect tan, this bittersweet quality is what makes him so charismatic in his work, but also so authentic to talk with in real life.

We agree to have a glass of wine together at the beachside bar of the Four Seasons Hotel, which is all done up for the Doha Tribeca Film Festival in red and purple lights, almost like it's Christmas, making this warm late afternoon appear even more surreal. While he lights up a cigarette, I think of what I'd really like to ask him. Is the real life Siddig the romantic ideal he has introduced us to in Cairo Time or, he gently cuts me off while I try to get the question out, "the kid in their mother's bedroom, opening the closet, finding all the fancy clothes and playing games with the other kids" that he describes himself to be? "I know that girlfriends and lovers in my life are still scratching their heads and looking at me like "I have no idea who you are!" Something most people don't know about me is that I never grew up. I appear to... People think I'm really mature but I'm really not. I'm kind of stupid."

Alexander Siddig is definitely not stupid. During our conversation -- over a glass of Pinot Gris from British Columbia, of all places -- he talks about the future of Arab cinema, something on everyone's mind at Doha TFF 2010, "The future of Arab films is absolutely up to Arabs and no one else. They've got the equipment, they've got the will, they've got the talent, now they just need a little bit of history behind them and a bit of cultural relaxation. Sex is a difficult issue, and marrying movies and Islam is going to be very complicated. But give it a couple of years, I have hope."

He also approaches the subject of Miral with care and insight. What initially attracted him to the project? "Julian is one of those directors who has you at 'hello'". And while Siddig did not read Jebreal's book before filming, he discloses what he thought about the script "I almost didn't need to read a script for this movie. But I did read the script and when I read it, I really loved the fact that it was a film about something that I hadn't done a film about. And I was kind of amazed that I hadn't done a film about Palestine and that particular issue which started in 1948!"

As he talks, I notice crimson stitching peeking out from inside the collar of his shirt, betraying the inner child in this otherwise very grown up casual look he is sporting. When Siddig takes off his cuff-links and rolls up his sleeves, in the balmy Doha evening heat, the same splash of red is also on the inside of his shirt's cuffs. "See here" he points to his silver cuff-links, which are dotted with green inlaid Moorish stars "one star is missing, which makes these even more special. I like imperfection. Perfect is so boring." He lights another cigarette, which will not be the last of the evening. "I'm going to quit this horrible habit. But not now, I have to chain smoke in my next film. After that..." After that, later, in the future, not for long, those are catch phrases Siddig uses a lot. There is this quality about him that makes him appear to have left his life up to chance.

Siddig's background is fascinating "half English, half Sudanese. I don't know if it's an English engine in an Arab body or an Arab engine in an English body... I'm not quite sure which way around it was..." Born Siddig El Tahir El Fadil El Siddig Abderrahman Mohammed Ahmed Abdel Karim El Mahdi -- Siddig El Fadil for short -- his "father was an African man and my mother a Liverpudlian woman". His Sudanese family is exiled all over the world, some in Egypt, some in Qatar. He tells me that his cousins have come to visit him earlier in the day and brought him extravagant gifts of Arab perfumes "these are not rich people, they are refugees, trying to survive each day and they came to visit me with gifts of expensive perfume. They wanted to show me their hospitality. It must have cost them a fortune!" I could swear there are tears in his eyes.

What is elegance to someone who so obviously embodies it? "You know, I find people with great honesty, bodily, physical honesty, who sit just the way they like to sit, and walk the way they like to walk, and don't come into a room all pumped up, I find them elegant. I respond to people whom I know and recognize as elegant people." Early in his life Siddig worked in a vintage clothing shop and correctly identifies the bold flower dress I am wearing as a "1940s rayon dress, quite pretty" words I do not expect to be in a man's vocabulary, let alone this man of men, about whom his Cairo Time director Ruba Nadda said "I had been obsessed with Alexander... I actually wrote the role of Tareq for him. I'm a big fan of his. As a writer you try not to write with someone in mind but he was it."

Patricia Clarkson, his leading lady in Cairo Time, gushed about him "I remember when I first saw him in the lobby of our hotel in Cairo, I looked at Ruba and I just whispered "Thank you". Everything you think about him is exactly true. He is everything a leading man should be and not just that he's tall, dark and handsome." Rula Jebreal, who based Miral on her own experiences growing up Palestinian during the First Intifada, confesses "when I met Alexander Siddig in London I could not shake his hand because he was so much like my father physically and he is Sudanese and English..." Rula's father was part Nigerian "and Alexander was talking and he was standing straight, his shoulders, and he is so dignified. He broke my heart. I looked at Julian and said "You know that he is the right person!" To which Julian Schnabel replied "I know, because I felt the same way from just reading the lines, without having met your father".

Toward the end of our talk, I timidly ask Siddig a few questions on his personal life, about which I shamefully know so little. He married, and divorced, his co star from the Star Trek: Deep Space Nine days, Nana Visitor. He has a son, Django, who told him once "Dad, you sweep into my life and then you are gone again, like a magician" and about whom Siddig gushes "he's really cool!" with a special tone I have not heard in his voice at any other time during our conversation. When 9/11 happened "being Arab became a front and center part of my personality, in a way that it had never been." He continues "now suddenly I had to face up to this new music and I excised the anger and defensiveness over a series of movies. In front of people, which is an interesting way of living I suppose..." But this newfound Western "fascination" -- for lack of a better word -- with the Arab world was also Siddig's breakthrough point, when "Ridley Scott, one of the most unlikely political bridge-builder, wrote this amazing part for an amazing actor called Ghassan Massoud, the Syrian actor who plays Saladin in the Kingdom of Heaven and I play his sidekick." That's when Siddig 'began to relax" and by the time Cairo Time came around, he "liked to be able to introduce people to Arab men, my Arab man."

When we are done, he graciously organizes a car from the hotel to take me home, giving them exact directions and charging it to his room. As I leave, I ask him for some famous last words. Thinking a moment, he shares his favorite credo "The Last Shall Be First" with a smile and a wink.