A month ago, Alexandria Clarke was so terrified when an unknown man grabbed her neck and forced her to a nearby alley, she couldn't even make a sound.

Now, the 22-year-old rape survivor is speaking out in hopes her attacker is brought to justice and that other people may be spared from an attack like the one she endured.

While HuffPost and other news outlets typically don't name the victims of sexually-based crimes, Clarke said she was unafraid to identify herself at a Sunday press conference (video, embedded) in Edgewater.

"I guess I don't care if people know," Clarke told the Tribune of her decision to come forward publicly. "I'm not ashamed. A crime is a crime."

The Loyola University graduate told DNAinfo Chicago it's her rapist who should be ashamed.

"I didn't want to deal with it all at first," Clarke said. Clarke's best friend, Sandra Al-Sakkal, 23, accompanied her to Sunday's event and said, "If even one positive thing comes from this nightmare" it's that Clarke speaking out could save lives.

"If we don't speak out, he gets away with it," Clarke's mother, Renee Touchton said. Touchton had earlier vowed the perpetrator would be captured.

The Guardian Angels joined Clarke at nearby Schreiber Park on Sunday and taught self-defense moves to the public, according to CBS Chicago.

On May 2, a man sitting with Clarke in a bus shelter at Clark and Devon grabbed her by the throat in broad daylight and forced her to an alley where he then raped and robbed the young woman. 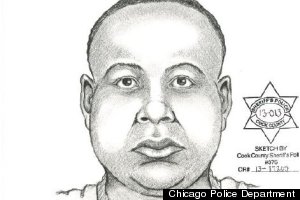 A police sketch of Clarke's attacker

“He also told me not to make any noise or he would kill me, so I didn’t want to do something cause I could have gotten myself hurt or someone else hurt if I tried to get someone involved,” Clarke told CBS.

Clarke's family is offering a $5,000 reward for information leading to the arrest and conviction of the attacker.