Brooklyn-based artist Alexandria Smith certainly poses a good possibility. Her renderings of hybrid adolescence blend the exaggerated simplicity of cartoons with the constant in-between-ness of collage, yielding warped creatures at once appealing and grotesque, human and not quite. 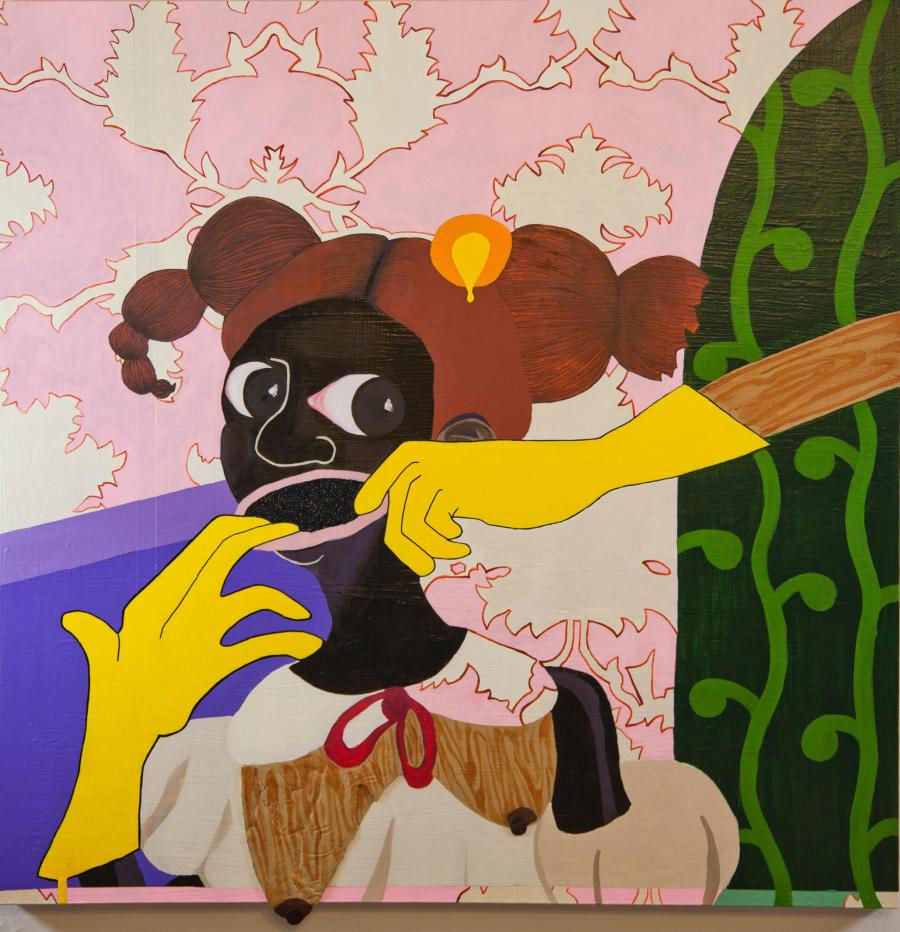 For her first New York Solo exhibition, "Perpetual Adorations," Smith explores this amorphous and endlessly awkward experience of growing up. Yet instead of delivering a narrative coming-of-age tale, Smith delves into the dirtier details of first becoming cognizant of your body and yourself. Ideological issues of race, sexuality and cultural difference mingle with the physical challenges of existing in a strange and alien form that's constantly mutating.

Smith's exhibition revolves around a character, Marjorie, based in part off the artist herself. Mostly dressed in pigtails and ribbons -- though not always featuring a conventional face -- Marjorie dwells permanently in a bizarre time in one's life when the world is constantly shifting between states of magic and violence, and nothing is ever quite still. Rendered in claymation-esque cartoons that teeter between horrific and playful, Smith mimics our own youthful journeys of self-discovery.

We reached out to the artist to learn more about her show.

First, can you explain how the title "Perpetual Adorations" relates to the themes in the exhibition?

The title of my show at Scaramouche relates to my incessant obsession with making work using these hybrid characters as avatars to explore awkwardness as it relates to identity development and longing for belonging. Although I use the word adoration in the title, for me it refers specifically to a worshipping of these characters that have begun to take over my everyday life. It's perpetual in that it's everlasting, endless and constant. 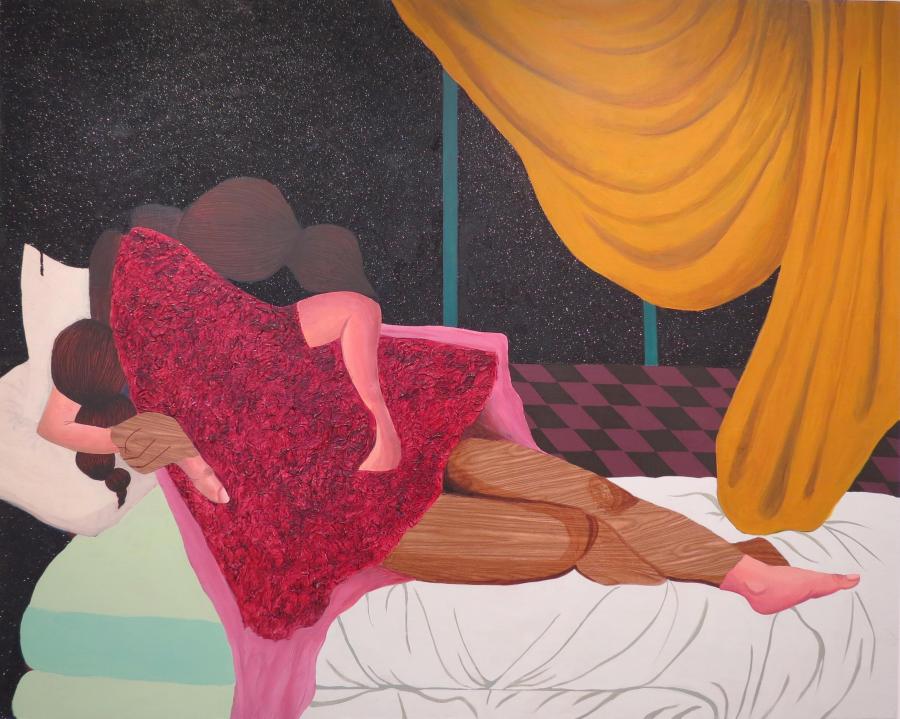 Who is Marjorie? What similarities and differences does she possess compared to you?

Marjorie is a young girl that wears a pillowcase/bag over her head and is adorned in pigtails, a dress and Mary Jane shoes traversing time, space and memory to discover where she belongs. Although, she mostly lives in my brown kraft paper sketchings, drawings and performances, I do feel that she has begun to filter into my most recent body of work taking on a different form. She sees herself the way the world sees her and this is evident in the forms that she inhabits.

The similarities to me that Marjorie possesses are mostly related to insecurity and self-esteem issues that I faced as a child. These same traits still rise to the surface in adulthood especially as I navigate transitions in my career and personal life. Psychologically, experiences in childhood affect us well into adulthood and are conjured up through memories connected to places, smells, sights and social situations so I feel it is inevitable that Marjorie and I share qualities.

As for differences between us, I feel that Marjorie is my alter ego that only those closest to me will see, when I am in my most vulnerable state. She is eternally uncomfortable in her own skin but that isn't a burden that I possess so that is where we diverge. In a new multimedia project that is in progress, I am exploring a narrative in which Marjorie eventually comes to terms with her purpose and finds solace in who she is, so her fate does seem to be evolving.

You present a view of childhood in your work that's far more grotesque, warped and even violent than the common notion of this innocent, pure state. How do you think childhood has been misidentified and why do you think this is so?

For me there is an innate optimism and humor that exists in my work amongst the grotesque, warped and violent moments. There is a balance of binaries that occurs that I feel is uniquely reflective of emotions experienced during adulthood and childhood. I think that many adults tend to ignore the fact that children are subversive. This stage in their lives is full of magic, strangeness and uniqueness and it allows them to see things that others don't see. In my work, I try to encapsulate all of these elements to thwart this ideal outlook on childhood that only explores its innocence and purity. Childhood has been misidentified because we still treat young people as vessels to receive information as opposed to having the capability to enlighten us as well. It is taboo and we immediately sweep things under the rug that children say or do that reveal more about private matters in their homes and our society as a whole.

How did you decide to incorporate the influence of Persian and Indian miniatures into this series?

I believe my interest in Persian and Indian miniatures began when reading an exhibition catalogue or artist monograph many years ago. I began studying them more in depth as I was creating small paper collages that source my own paintings and re-contextualize them. I find that miniature paintings are a happy medium between artwork and narrative without being too literal, which I try to capture in my own work. The small scale of my collages and Persian and Indian miniatures force a close reading and intimacy with the work that is further complicated by a layering of interior and exterior landscapes.

How is childhood different for a girl than a boy? Is this something you aim to address in your work?

I think childhood is different for a girl than a boy mainly because society treats girls and boys differently. My work addresses the experiences of adults as well as children which is inherent in the boundaries that I blur by depicting hybrid characters. The characters in my work are sometimes multi-gendered and multi-racial so the work isn't only addressing specific differences or similarities but also the overlapping experiences we all share. 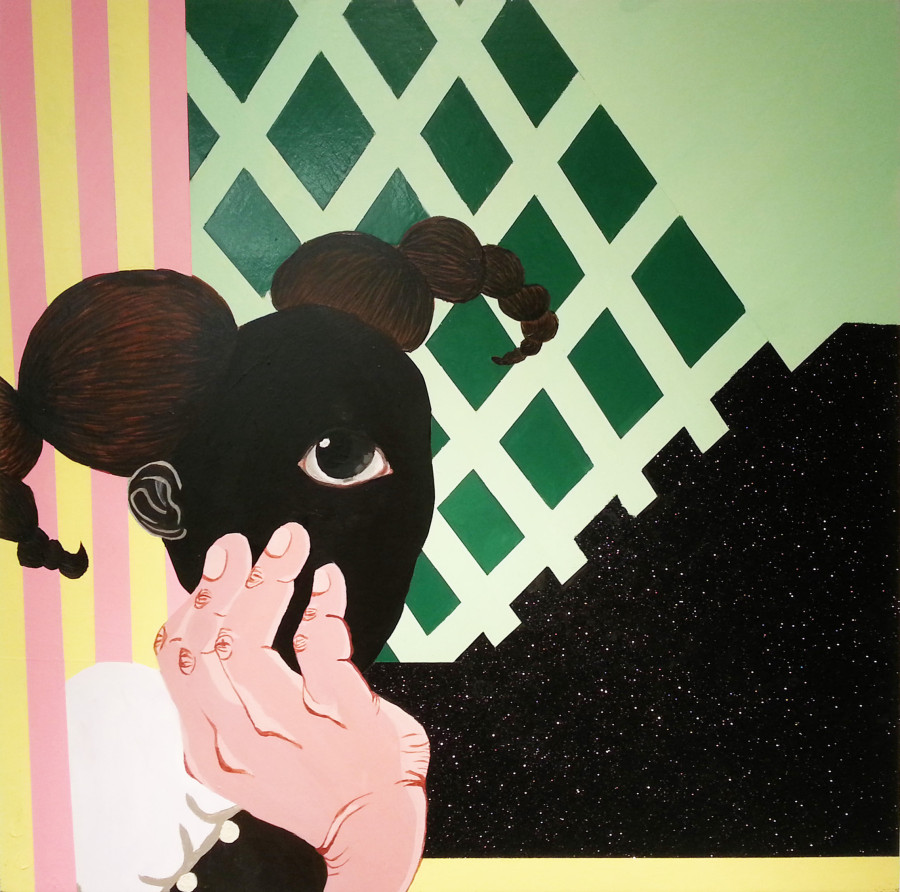  Alexandria Smith, The uncertainty of it all, 2014 Acrylic, mixed media on panel

If you could compare your artistic process to another process -- cooking spaghetti or conducting surgery -- what would you say?

That's a very interesting question. I guess, as an athlete, I'd compare creating, specifically painting, to basketball. In basketball, you practice, run drills, shoot around and work on all of these individual elements. You put in a lot of effort to improve both mentally and physically, and bring these disparate parts together to create a homogenous, well-rounded game. Similarly, my studio practice is also physically laborious. I engage my entire body as I cut and construct paper and paint skins that are used to collage the surface of the panel. I use paint and glitter to cover both large and small surfaces which oftentimes requires me to adapt painstaking positions. My intuitive approach to creating allows me to enter a zone. There's a sense of mystery in the process and I enjoy seeing things unfold. No matter how difficult both of these processes are, I still find great pleasure in getting up everyday to paint and play basketball even as my body ages.

When I first began using oil paints in undergrad, it was to go against the grain and prove one of my professors wrong. Initially it was discouraging because I didn't know any contemporary (living) African-American painters that were making art using African-Americans as their subjects. In undergrad, I was an illustration major and was heavily influenced by Jacob Lawrence and as I became more immersed in the contemporary fine art world, I came across the work of Wangechi Mutu and was blown away. I began to realize my connection to the history of painting and as time went on, this became the impetus behind why I continued to paint. As I entered the teaching field I realized how impactful my role as a contemporary painter was to the lives of my students.

What is a visceral childhood memory of yours that continues to affect your artwork?

I don't have any one visceral childhood memory that affects my work but I do have many memories related to being bullied and teased. During my formative years, there were always aspects of my personality that made me different than my peers in school and everything; the way I talked, dressed and behaved was scrutinized. Those feelings are still very much present in my artwork.