But Navalny and other opposition leaders face a tough task getting their message out beyond Russia's small urban middle-class, especially as they are largely kept off state media and often quarrel amongst themselves.

Wearing a dark jacket and jeans, his face unshaven, Navalny was released after serving 15 days for handing out leaflets in the Moscow metro to promote a protest rally.

He said he would go home to shower and change before heading to visit Nemtsov's grave, having missed the funeral on Tuesday because of his sentence.

"There will be no let-up in our efforts, we will give up nothing. This act of terror has not achieved its goal in this sense," Navalny said after walking out of the detention center through a green metal gate, carrying his belongings in a black sports bag. 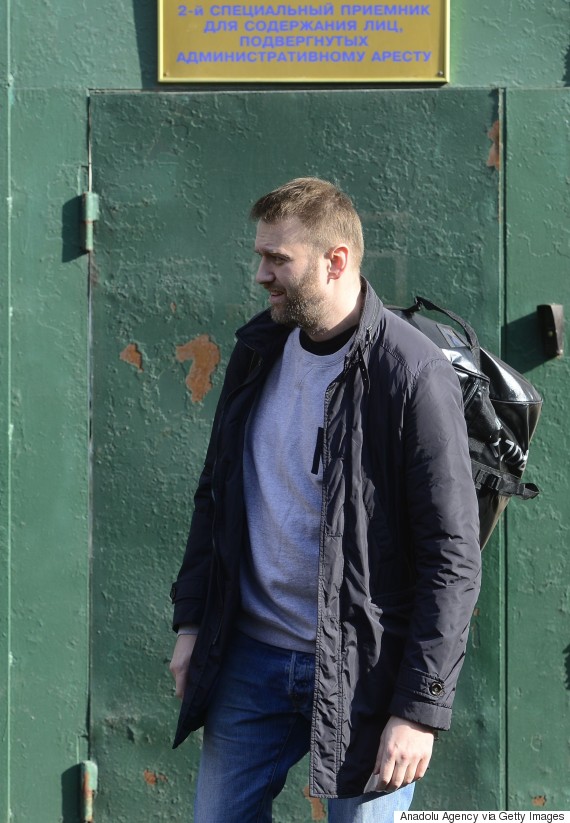 Nemtsov was a liberal who had served as deputy prime minister in the 1990s but became a staunch critic of Putin. He was shot by an unknown assailant last Friday night within sight of the Kremlin walls, becoming the most prominent opposition figure to be killed during Putin's 15-year rule.

Nemtsov's allies say it was a political killing aimed at intimidating them. Putin has called it a shameful tragedy, and the Kremlin has denied any involvement.

The opposition has scheduled a protest rally in Moscow for April 19, said Mikhail Kasyanov, a former prime minister and close associate of Nemtsov.

Nemtsov and Navalny were leaders of mass street protests against Putin that swept Moscow and other big cities in 2011 and 2012. But the rallies lost steam as the movement failed to evolve into a force able to compete with Putin.

Putin began a third presidential term in 2012 and has strengthened his grip on power. Actions like the annexation of Crimea from Ukraine have triggered Western sanctions but boosted his popularity, currently running above 80 percent.

Some leaders of the liberal opposition are taken more seriously abroad than they are in their home country. Many have faced court cases and jail.

The opposition is divided into small groups who lack a single leader or program and often disagree on strategy and tactics, resisting efforts to bring them together in one force.

The killing of Nemtsov left activists and sympathizers devastated, deepening the grim view among many of them on prospects for any change in Russia.

Responding to a greeting from Navalny on Twitter after leaving detention, opposition activist Nikolai Levshits tweeted:

"Congratulations on returning to the new reality :