Thanks to the generosity of hundreds of strangers, a Texas girl with a rare weight-gain disorder has raised enough to pay for lifesaving surgery.

Alexis has hypothalamic obesity -- an agonizing condition she developed two years ago after surgery to remove a rare brain tumor. The operation damaged Alexis' hypothalamus, the part of the brain that helps regulate weight, appetite and moods.

Since the surgery, Alexis has reportedly gained about 140 pounds -- and she's getting heavier every day. Her weight "just keeps going up and up,” her mother, Jenny Shapiro, told NBC News.

Alexis now weighs 198 pounds and adds at least two pounds a week, despite a strict, low-calorie diet and an exercise regimen. The condition means her body believes she is starving, putting Alexis in a constant battle with overpowering food cravings.

“She’s always hungry,” her mom told NBC. “In the past, we’ve had to padlock the cupboard.” 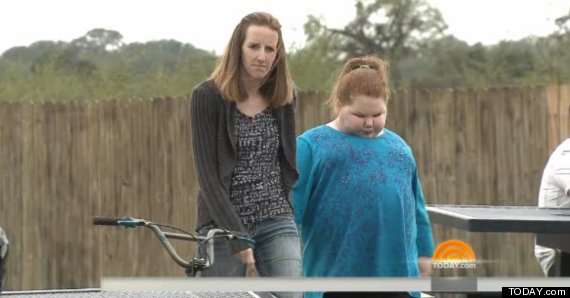 Alexis Shapiro (right) taking a walk with her mom, Jenny.

Alexis, who reportedly wears a woman's size 1X or 2X, has developed Type 2 diabetes and was recently hospitalized for a kidney infection. Physically encumbered by her size and wanting to avoid the stares and taunts of classmates and strangers, Alexis is now home-schooled and avoids going outside. Her mom said she has no friends.

"It's continued to get harder and harder," Alexis' mom told Fox News. "Every day there's something new that she can't do. She's hurting. She's uncomfortable. It's just a struggle."

If left unchecked, Alexis will continue to gain weight, her mother said. One day, the condition may prove fatal.

"Many kids have lost their lives to this," Jenny Shapiro told Fox. "You develop all the symptoms that come along with weight gain -- and not only that, but it's rapid. Their bodies don't have any time to adjust to it at all."

Doctors told Alexis' parents that the only thing that might help their daughter is gastric bypass surgery. Dr. Thomas H. Inge, an expert in pediatric obesity who is treating Alexis, told NBC News that the surgery could help the child "lose between 20 percent and 30 percent of her body mass, and also curb the misfire between her brain and gut that makes her feel like she’s starving."

Alexis' family could not afford the $50,000 surgery, and their insurance company, TRICARE, refused to cover the cost. TRICARE, a Department of Defense insurer for uniformed members of the military, explained to the family that gastric bypass surgery may only be covered if the patient is 18 or older, or has reached full bone growth.

"We do understand that they have policies in place," Ian Shapiro, the girl's dad, told Fox News. "We were hoping that they would look at Alexis as an individual, not a number, not just fitting into a box."

TRICARE has said that the family could appeal the decision, but the parents said they feared an appeal would take too long.

Fortunately, they no longer have to wait.

Five months ago, the Shapiros started a Go Fund Me campaign for their daughter, seeking help raising $50,000 for the surgery.

"Alexis is suffering from this weight and we want to fight for her. Please join us," Jenny Shapiro wrote on the fundraising page in July.

In four months of fundraising, the campaign only raised about $1,000.

But over the weekend, Alexis' heartbreaking battle went viral after news outlets, including NBC News and Fox News, covered the girl's story.

The Shapiros have now surpassed their goal.

"Oh my!!! I can't believe this! We are so grateful," wrote Jenny Shapiro in a message on the Go Fund Me page Sunday. "Thank you to everyone who cares."

In a Monday report, NBC News wrote that Alexis could get the gastric bypass surgery within six weeks.

“The team is certainly in favor from a medical standpoint of moving forward as quickly as we can,” Inge told the news outlet, adding: "I am really amazed at the power of information to bring out the best in people in cases like this."