More than 20,000 tons of bright green algae has washed ashore on China's beaches in recent weeks, but there's disagreement as to what caused the massive bloom.

The algae began washing ashore about a month ago in the city of Qingdao in China's eastern Shandong province, as it does every year. But this year's bloom is estimated to be twice the size of 2008's, when the Beijing Olympic sailing event was threatened by a similar bloom. 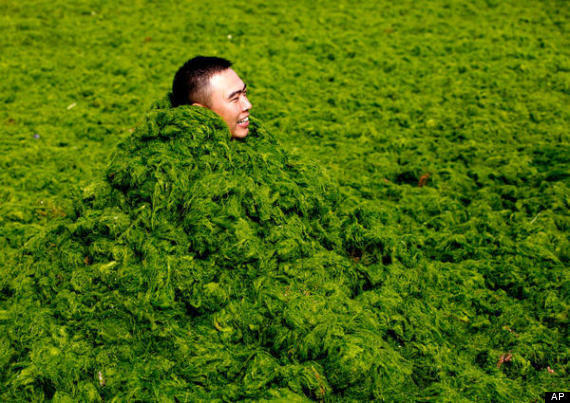 A man buries himself with the algae that has covered beaches in the Qingdao area. (Photo: Jian Feng/Associated Press) 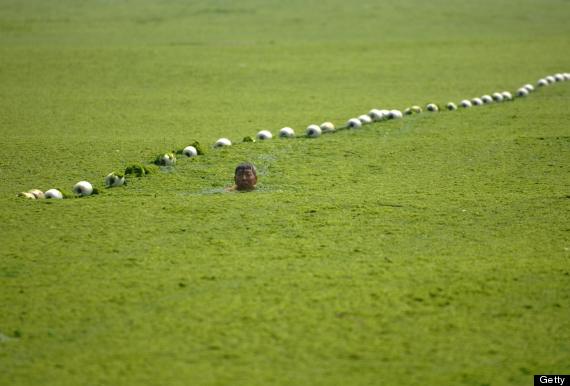 A man swims in seawater covered by a thick layer of green algae on July 3, 2013, in Qingdao, China. (Photo by ChinaFotoPress/ChinaFotoPress via Getty Images)

The Los Angeles Times reports that so far this year the algae has covered an area of about 11,500 square miles, which is larger than the state of Massachusetts.

Some researchers believe the algae is from seaweed farms south of Qingdao, which grow nori on coastal rafts that attract algae. Others say it may be naturally occurring, or from fertilizer washed into the ocean from gardens, farms and golf courses.

Generally, the plant poses no danger to humans, but it can produce a toxic gas if left to rot, the LA Times notes.