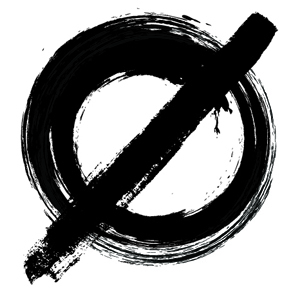 On May 5, a passenger on American Airlines flight 3950 from Philadelphia to Syracuse noticed something strange about the olive-skinned, dark-haired man sitting next to her. As the flight prepared to depart, he scribbled unintelligible symbols on a notepad.

Suspicious, the passenger signaled a flight attendant, passing a note to alert the crew of the potential terrorist threat sitting next to her. The plane, on the tarmac awaiting takeoff, reversed course and returned to the terminal. The mysterious man and his notepad of strange symbols were escorted off the plane. The man was questioned by the FBI.

The scribbling turned out to be mathematical symbols - a differential equation. The suspected terrorist was a decorated Ivy League economist named Guido Menzio, the winner of prestigious Carlo Alberto Medal.

Dr. Menzio is Italian, not Middle Eastern. Though the passenger who alerted authorities to the presence of threatening glyphs couldn't get her ethnic profiling straight, you really can't blame her for confusing a math equation for an Arabic farewell. Fewer and fewer Americans have the first clue these days about x and y.

According to the Programme for International Student Assessment (PISA) of 15 year-old student math, science and reading aptitude, U.S. students' ranking in math scores have dropped steadily over a 12-year period. In 2000, U.S. students ranked 18th in the world. In 2012, they ranked 36th. The news is not all bad: according to PISA, our students are still smarter than Croatia's. 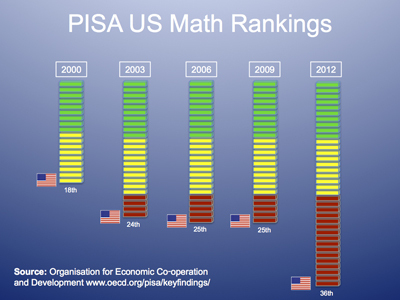 Though foreign-born terrorists have killed 25 Americans since 9/11 (compared with over 153,000 gun-related homicides in the same period), the absence of math skills represents a far greater threat to the United States than ISIS in the long term. While terrorists brought down the World Trade Center, it was math that erected the twin towers in the first place.

Had the twin towers been engineered using the conventional 1960's skyscraper designs of the time, they would have come down long before 2001. In addition to the challenges posed by supporting the sheer weight of 1,360-foot-tall buildings, the towers also needed to withstand the load caused by stiff winds from New York Harbor.

The solution posed by structural engineers John Skilling and Leslie Robertson was to fundamentally rethink the design of super-tall buildings, replacing the traditional infrastructure of internal columns with an exoskeleton lattice of exterior columns. The resulting skyscraper "tube" could bear the enormous weight of what were then the world's tallest buildings, while also resisting wind speeds of up to 150 miles per hour.

The twin towers were marvels in the 1960's, a time when America served up other engineering wonders like the first Internet data exchange and the first manned moon landing. The Saturn V moon rocket, the twin towers, and many other American tech advances were all propelled by math.

Tall buildings and moonshots aren't just about national bragging rights. They are biproducts of a country's intellectual capacity and its priorities. In 1944, one of America's top priorities was the GI Bill, which provided a range of benefits for veterans returning from World War II. Nearly eight million veterans took advantage of the GI Bill's education benefits, enabling veterans to get college or vocational education. Management guru Peter Drucker described the GI Bill as "the most important event of the 20th century" and credited it for the rise of America's modern knowledge economy.

Historian Ed Humes said that "the scientists and engineers and teachers and thinkers who brought in the information age, who took us to the moon, who waged the cold war, you name it - all those men and women were educated through the GI Bill." The bill provided education for 14 Nobel Prize winners, three Supreme Court justices, and three presidents.

America's educated workforce was a key catalyst of its postwar economic boom and associated prosperity. America has largely coasted off FDR's depression-era investments in education and infrastructure ever since.

Since this time, the importance of education in Americans' minds has faded, along with an awareness of its connection to American prosperity.

In a recent Gallup poll, while 90% of democrats rated education as a national priority, only 68% of republicans shared this view. Nowhere is this schism in priorities more starkly contrasted than in each party's choice for president.

One of those presidential campaign's slogans is "Make America Great Again." The other's response is that "America never stopped being great." Though many of us don't buy in to one candidate's wall-building, Muslim-deporting recipe to return to American greatness, the claim that "America never stopped being great" doesn't feel quite right either. We know when we're off our game.

Maybe American greatness doesn't lie as much in its condition at a particular moment as it does in its enduring potential for greatness. Sometimes that potential is realized, both when America is smart, as well as when it does the right thing. America has the capacity for greatness, which is fulfilled when a truly great leader comes along once every few decades.

As was the case 70 years ago, if an American president truly wants to make America great again, a great place to start is by educating its people.