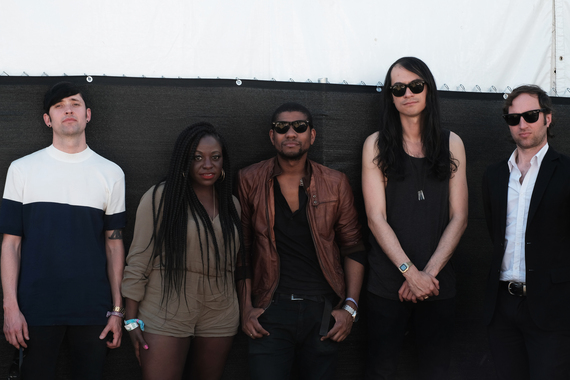 Algiers, a band that continually expresses what they want, all while articulating a powerful message. They are continually defining and re-defining themselves all while growing with leaps and bounds. Coachella 2016 was another monumental movement for this band of four. Circling up with them after their set turned out to be a meeting of the minds. These young men not only have talents they embody a genuine awareness for today's young generation. Our lively, conversation from Coachella weekend1 is surely just the beginning of many more.

M: I dig that you are a band with a message. You are using your platform as a statement. Is that an intentional motive, or am I just reaching way to far?

Algiers: (Franklin James Fisher)... No, your'e not reaching. I think when we formed the band Ryan, already had some notions about what he wanted to do with his next project. His last band came to an end.They were in a band prior to Algiers. It was very much an outcome of conversations and experiences we had with each other and visually bringing that all together. But, we're not, it's not like we're a topical band

M: No, of course not

Algiers: (Franklin James Fisher)...I think people, anybody or people who kind of live on the peripheral of what we all know to be main stream America. Recognizes the things that we talk about as ages old. But, it's not limited to any particular subject matter what we do, but it is good to have a place to address these things, these feelings. To be apart of something thats bigger than just the self and that transcends more just subjective experience. (Ryan Mahan)...It's also quite a natural expression of our influences so Lee and I grew up in Punk Rock and also in Hip-Hop. So, like going back to Hip-Hop was political and it taught us about black experiences and the struggle. I think its very natural for me particularly when I am engaged in music to actually express it in ways that actually enable me to speak politically to things that Im not able to actually articulate in daily life. I've tried, I've tried actually very hard to write it down.

Algiers: (Ryan Mahan)...Theres a frustration and I think if we were living apart and as you said, we're from Atlanta so the history, the oppressive history of the south really kind of permeates our plug and I think the music enables us to express ourselves in cathartic ways. Actually at the same time everything thats happened over the past few years or actually movements coming about are reestablishing themselves in the mainstream and like forcing the media to look at, like "Black Lives Matter" and say this is what's happening. This is what's going on. U.S. has never really had a powerful political movement since the panthers and I think now we're looking at a new stage and its actually really refreshing for us to be there and to feel that.

M: It's refreshing to listen to. Creatively as a group of four, how do you come together to solidify just one song? There is so much that comes into formulating like, ok this is how we are going to lay this track. This is the direction we are going to go in?

Algiers: (Franklin James Fisher)...Well, that's the fun part there is no singular approach. Process is a huge part in what we do and how we go about it so it changes sometimes entirely from one song to the next. You know we have so much in common we have just as much in terms of differences.

M: For instance, your set that you did for Coachella how did you come together to decide this is the set we are going to play. This is the energy and feel we're going to bring to this?

Algiers: (Franklin James Fisher)...I mean-- from what I understood festivals are really like um, it's quite difficult when you play at 1:30 in the afternoon.

M: Haha, yea how did that feel?

Algiers: (Franklin James Fisher)...We were kind of like the breakfast club.
(Ryan Mahan)...We're not really a day time band we are a camp fire band and we're trying to get people together and we might burn you as well so we're not really sure what thats like. But I mean this is retrospective. To be juxtaposed amongst a lot of pop groups its an interesting actual experience to kind of think about. We set out to make music that will at least engage in a discourse with pop music itself and to engage in whats going on now and how that reflects on our culture. I think its interesting to be here and to be placed in this weird world and I think people probably are still working on what are these guys--where are these guys coming from what are they doing.

Algiers: (Franklin James Fisher)...There's no sense of having to defend anything, no as far as I am concerned. you're not responsible for anything--its art! Your'e expressing something and you are synthesizing the world as it is presented to you, once you put it out there you're not responsible for it anymore. It's about starting a dialogue were not handing out prescriptions you know.

M: I ask because with social media and having that visual plus things are so instant these days. People are able to have so much more of a voice than they were before. You can say one thing and it gets taken off to left field at times. I love to see how artist handle that. Do they dance with it, go on a twitter rant--or just let it go?

Algiers: (Ryan Mahan).... We don't really have to do that just because we are doing our own thing. And, also we're small so its not like people are like "oh what's Algiers saying about this hot new topic". That's not what were about--that's not what we do. I would disagree, I don't really necessarily think social media enables people to have a voice necessarily, I think sometimes it takes away people's voices, it takes away people's ability to think about things in certain ways because if its instantaneous you get a less opportunity to actually absorb things. When we were coming up off music and politics we were learning about things. We had time without somebody telling us what that actually meant. So, if you're thinking about this whole era of the pundit, thats where we are at with social media as well. People are pundits before you can actually even interpret whats being said, people are telling you what that means and I think thats problematic. Before, I was actually able to form a political identity through the music that I listened to through the history that I engaged with you know. I think its a really interesting time and place. I think this whole world is quite interesting for us. We're confident in what we set out to do. Algiers is a place so you can say--we're very confident in the identity of what we are even if its quite diverse.

M: Well, said! Ryan Mahan. So now that you have done Coachella which is a great platform no matter what level you are on whether your an artist or press how are you staying present and grateful yet swiftly planning your immediate next?

Algiers: (Franklin James Fisher)...Well, I'm quite interested in the idea that with Coachella you get to play twice. You get a chance to kind of build on what you did the previous weekend. You sit back and analyze and kind of take in how people reacted or did not react to what you do.

M: Do you treat it like a basketball game and run scrimmage and take notes?

Algiers: (Franklin James Fisher)... It's funny that you say that because I make a lot of analogies between music and sports.

M: Me too, I love sports! What did you guys play?

Algiers (Franklin James Fisher)... Yea, forsure! And like Ryan I know grew up playing sports basketball, football. Matt Tong played American football. (Matt Tong) ... yea so in the U.K. there is actually like a University League so me and my housemates joined as a joke and we ended up doing the whole season.

M: What were you, quarter back?

Algiers: (Matt Tong)... No, I was trying to be a receiver but like all the line men wouldn't show up for a game because they would be too hungover or drunk so I ended up being a line man. Probably like the skinniest line man in the game.

M: You're kidding me?

Algiers: (Matt Tong).... People would like see me walking up to scrimmage and just start laughing.

M: Do you have pictures in your uniform?

Algiers: (Matt Tong)..There might be a few lying around. I actually stole the shoulder pads and I have my shirt with my name on it.

Algiers: (Franklin Fisher) Remember what I was saying about the next show, he's going to be wearing shoulder pads. (Franklin James Fisher) I was fourth string quarter back, a tight end and strong safety and I was not good at any of them.

M: Ha-ha, oh wow! Well you are good at what you do now. So, in regards to watching what you did and applying it to your second weekend playing in Coachella. Is that something you will all do collectively as a group?

Algiers: (Matt Tong)....There is something that really impressed upon me when I first joined the band was this idea of game tapes. Frank has a lot of cell phone clips of the practices and that was really insightful to me. I really like the idea of actually referring back to something and breaking it down. Especially someone who didn't really know these guys really well. I think that cultivate us as a band of like kind of referring back to previous performances.

M: It's been such a pleasure chatting with you guys, thank you.

Algiers: Thank you so much!