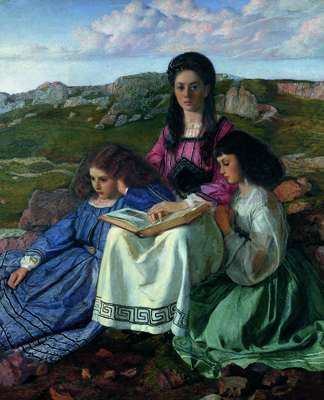 What does the Queen of Welsh resorts, the town of Llandudno in Wales (three hours on a direct train from the city of London), have to do with Alice in Wonderland?

In the summer of 1864, Alice Liddell (Lewis Carroll's inspiration for Alice in Wonderland) and her two sisters, Lorina (who inspired the Lory) and Edith (who inspired the Eaglet), posed for up to 10 hours a day while the distinguished English artist, Sir William Blake Richmond, created one of his most famous paintings, called The Sisters. The painting of the three Liddell sisters set against the background of the Great Orme, Llandudno's famous mountain, is one of the highlights of the Tate Liverpool's Alice in Wonderland exhibition. Sir William Blake Richmond painted the portraits of the most prominent people of the day. The Sisters, well received by the art critics of the day, was regarded by Richmond as a milestone in his career. Sir William had this to say about Alice Liddell:

"Little Alice, to whose pretty face and lovely coloring no reproduction can do justice, is seen on the right in profile, peering at the big volume on her sister's lap." 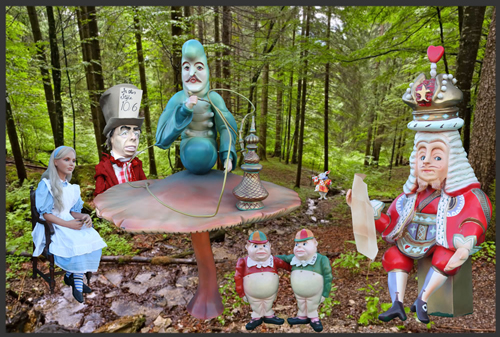 The group scene with the Hatter, Alice, King of Hearts, Tweedles and Caterpillar
(Photo courtesy of Alice In Wonderland Ltd.)

When my daughter and I were creating our book, The Real Alice in Wonderland, about our relative Alice Liddell, we spent time researching Llandudno's long connection to Alice Liddell and her family. Alice's father, Henry Liddell (who inspired the White Rabbit), his wife Lorina, and the governess Miss Pricks (who inspired the Queen of Hearts) came to Llandudno for family vacations. It was here that the Liddell family built their large, gothic styled vacation home, which they called Penmorfa. Many famous celebrities of the day, including Prime Minister William Gladstone, came to visit them. As the Alice in Wonderland books became more famous, Alice Liddell also became a celebrity. Tourists wanted to enjoy beautiful Llandudno, perfectly situated on the western shores of Wales, and learn more about the story behind one of the greatest children's stories of all time. In time, the town offered related tourist attractions, including an Alice trail, a Wonderland store and a Rabbit Hole attraction conceived by residents Muriel and Murray Ratcliffe that recreated Alice book scenes with life-size robotic characters. Eventually, Penmorfa was converted into a grand hotel. Around the turn of the 21st century, some attractions began to disappear for a number of reasons, including insufficient traffic to support the upkeep of some of the historical sights that celebrated Llandudno's important connection to the Alice in Wonderland story.

The Directors of Alice In Wonderland Ltd., Barry Mortlock and Simon Burrows, have purchased the Rabbit Hole content from Llandudno resident Muriel Ratcliffe, the owner of 20 years. They have launched a new Wonderland website to offer the finest Alice in Wonderland collectibles from around the world, and to act as portal to communicate new Alice initiatives underway in Llandudno. The team is working closely with the local County Council to bring an updated Alice trail to Llandudno. It will be a walking trail with 10 to 12 key places of interest that will depict the connection of Alice to the town. The new age trail will feature high tech interactive activities and will be open to the public in fiscal 2013/2014. Llandudno's existing railway station is also undergoing a major redevelopment. It will become the start of the trail. Mortlock and Burrows' coffee shop, currently housed within the town's large Waterstone's bookstore, is also being revamped "Alice style", which no one will be able to miss since it will be the final watering hole at the end of the Wonderland trail. Muriel Ratcliffe will stay involved in their plans to bring the strong Alice connection back to the town of LLandudno. Ratcliffe explains, "I get phone calls and emails to this day asking if the attraction is still open." 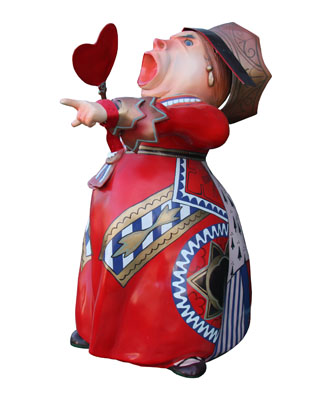 The Queen of Hearts (Photo courtesy of Alice In Wonderland Ltd.)

I had the opportunity to chat with Barry and Simon about their "Alice of Llandudno" project:

Why do you believe what you are doing is so important to Llandudno, Wales, and to the rest of the "Alice" loving world?

Llandudno is a beautiful Victorian seaside resort that is full of character and has charmed visitors, young and old, for many years. It is a lovely part of the world with the stunning Snowdonia National Park and World Heritage sites nearly. It also plays an important role in telling the story of the young Alice Liddell who was the inspiration behind the books. Alice's parents honeymooned in Llandudno and stayed in one of the beautiful hotels whilst their holiday home (Penmorfa) was being built. The family spent many summers in Llandudno and they must have shared some stunning sunsets since the house had magnificent views. Alice Liddell is important to Wales. She is a Llandudno celebrity, having graced our shores with her presence. Her story needs to be told to the world and remembered. The charm of the book, Alice's personal story, and the charm of the resort go hand in hand. 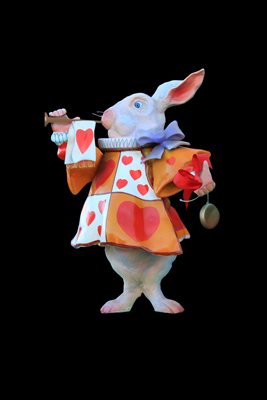 The White Rabbit (Photo courtesy of Alice In Wonderland Ltd.)

Why do you think Alice in Wonderland continues to be so inspiring to generation after generation?

We think the fact that the story of Alice in Wonderland has a fascinating story behind it makes it all the more inspiring. We are intrigued by the story behind the book and have a genuine interest in the lives of the real people involved. In our daily crazy worlds, we occasionally need some escapism from reality. Alice in Wonderland is a story that takes us into a different dimension; it stimulates, feeds and drives the imagination. There are no boundaries, no religion, and no discrimination; we are free to let our imaginations run wild; anything impossible can become possible. As a child, we know no boundaries; with a vivid imagination, all things seem possible. It is the boundaries and walls we put in place that make things impossible! Break down the boundaries, tear down the walls, feed your imagination, and you get Alice in Wonderland.................!

C. M. Rubin is the author of two widely read online series for which she received a 2011 Upton Sinclair award, "The Global Search for Education" and "How Will We Read?". She is also the author of three bestselling books, including The Real Alice in Wonderland.