One of the biggest arguments against allowing the sale of shark fin soup is the brutal way in which the fins are harvested.

The practice of "shark finning" involves catching a shark, slicing off its fins and then dropping the de-finned shark back in the ocean to die as to not have to carry the entire body back to dry land when all the fishermen are after is the fin.

In a nod to shark finning's savagery, performance artist Alice Newstead is employing a similarly painful method in her protest against the practice scheduled for Wednesday at LUSH Cosmetics in San Francisco's Marina District. The British performance artist, also a former LUSH employee, will be hanging herself from hooks in the window of the Union Street storefront.

If you're wondering, yes, those hooks will be going though her skin, and yes, it's going to be gruesome. SF Weekly reports that Newstead is doing this to "shed light on the plight of sharks and how their future is literally hanging in the balance."

Check out this slideshow of Newstead in action (warning: graphic images):

Newstead has performed the stunt at other LUSH Cosmetics locations all over the world, such as England and Hong Kong as part of the beauty supply company's campaign promoting its Shark Fin Soap, a product that contains no actual shark fins but whose proceeds go to efforts banning the shark fin trade.

"She will be hung through the skin on her back," Halls explains of LUSH employee Alice Newstead. "She's meant to represent the shark, and the hooks are the same ones used in longlining process."

"It's horrific," she says. "The sharks are hauled onboard, their fins are sliced off, and sometimes they're dumped back in the ocean to die."

Millions of sharks are killed around the world every year for their fins. The total number of sharks finned every year is subject to debate, with estimates ranging between 10 and 100 million.

The California State Senate is currently debating a bill that will clamp down on the shark fin trade. While shark finning is currently outlawed by U.S. law, the bill currently making it's way though the state legislature would ban the sale, processing or trading of shark fins outright.

Shark Fin Soup is a delicacy in Chinese culture and some are calling the proposed ban discriminatory, as it specially targets one particular ethnic group.

California is the single largest market for shark fins outside of Asia. 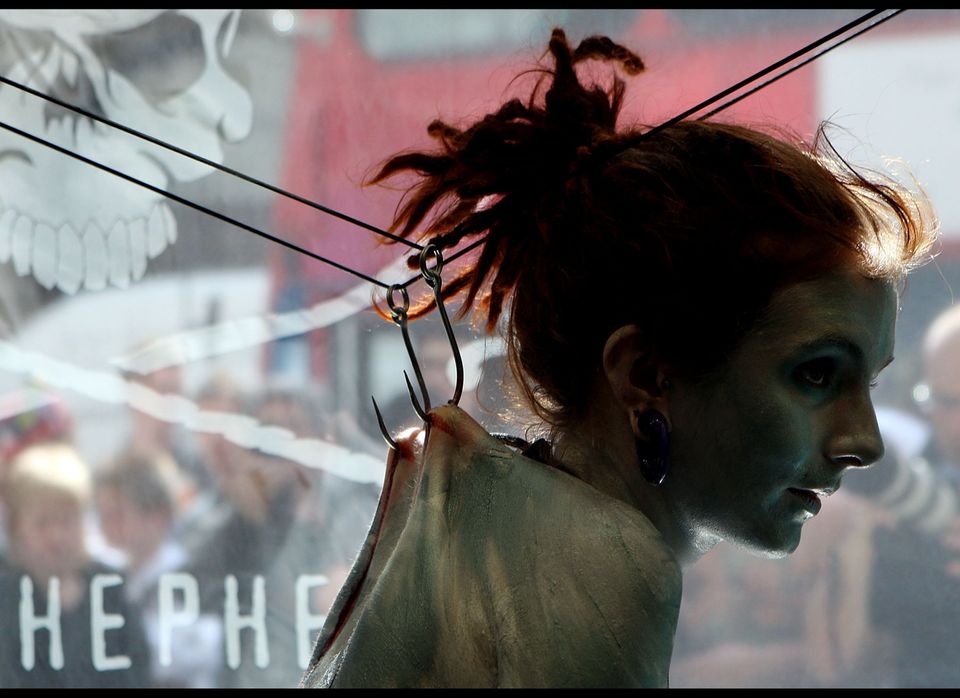