Warning: This post contains spoilers from the first six seasons of "The Good Wife," up to and including the season 6 finale.

When the sixth season of "The Good Wife" came to a close on May 10, it marked the end of one of TV's most powerful, complicated relationships: Kalicia. Up until this point of the marvelous show, attorney Alicia Florrick (Julianna Margulies) and investigator Kalinda Sharma (Archie Panjabi) were alternately the best of friends and the bitterest of enemies. There were runs of episodes where they almost always shown together, and much longer runs where they were never in the same room. Gossip around Hollywood chalks the latter up to a vicious but completely mysterious fight between Margulies and Panjabi, which only makes the on-screen relationship between the two characters more fascinating.

Amidst all the turmoil, there was one thing you could count on with these two: They would drink. They loved drinking, a trait they share with several other powerful female protagonists on TV dramas.

So to commemorate their glorious friendship, The Huffington Post combed through six seasons of "The Good Wife" to find all the scenes where Kalicia drank together. Here they are.

After Alicia takes her shot, Kalinda reveals that this was a trick: no such tradition exists. For a moment, it seems like Kalinda won't drink her tequila. But then, of course, she does. Alicia smiles.

The next nine episodes feature lots of interactions between Alicia and Kalinda, but none of them involve alcohol, sadly. They don't drink together again until the 11th episode. Even then, it's not in a bar, but in a room in their office: they drink beer and eat kettle corn while watching TV news related to the two cases of the week.

In episode 14, though, Alicia and Kalinda hit the bar again, because they have some personal matters to discuss. (Glenn Childs has asked Kalinda to testify against Alicia's husband Peter.) This time, Kalinda orders a dark beer...

...while Alicia drinks what looks like tequila again. But she sips it instead of shooting it.

This drinking session apparently goes well, because they go to another bar in episode 21. Alicia drinks what appears to be a martini with olives.

Kalinda gets another dark beer.

The very next episode, the second-to-last of season 1, opens with Alicia and Cary finding out that Alicia got the one full-time position they had been competing for all season. Kalinda waits for Alicia down the hall and, knowing that Alicia will likely feel crummy for beating out Cary, insists that they go to get drinks. They start by ordering two tequila shots in a row.

They keep drinking, as is evident from the plethora of glasses that accumulate on the bar top.

All that tequila gets them pretty wasted. A cute, younger guy hits on them, sending them into a giggle fit. He buys them yet another round of drinks.

These extra drinks send them into the truthbomb-dropping stage of drunkenness, prompting Alicia to ask Kalinda whether she's a lesbian.

Kalinda refuses to answer, much to Alicia's chagrin. But then a call to Alicia's cell phone saves her. Will tells Alicia she has to go see a client, so she composes herself and goes to Colin Sweeney's house, where she finds him handcuffed to a dead female body. Alicia maintains admirable composure, considering her inebriation. Close call!

Alicia and Kalinda next drink together in the sixth episode of season two, at an office party to celebrate a huge class action settlement. While drinking champagne, Alicia notes that Kalinda doesn't look as happy as everyone else at the firm.

Just three episodes later, in "Nine Hours," one of the best episodes of the entire series, Alicia and Kalinda work on a stressful death row case from Alicia's apartment. At a particularly trying moment, Alicia grabs them two beers out of the fridge.

They drink them on Alicia's bed. Slash fic alert!

They actually only visit a bar one time in the second season, in the 17th episode. They return to their beloved tequila shots.

A couple episodes later, Alicia discovers that Kalinda had slept with Peter, one time, many years ago, before they were friends. She's completely furious. The revelation creates a rift between her and Peter -- and, more importantly, between her and Kalinda. Throughout most of season 3, they only speak when work requires them to. Some have speculated that the real-life tiff between Julianna Margulies and Archie Panjabi first emerged around this time, though Margulies attributed the break to natural developments in the plot.

In any case, they finally drink together again in the final episode of season 3. Though it begins as a kind of "Parent Trap" situation -- Cary invited them both to the same bar -- they actually manage to have a bit of fun.

They even take tequila shots together!

This bar visit sets off something of a renaissance in their friendship. They visit bars three times in the first half of season 4. They sip red wine and whiskey in episode 6.

Cary joins them for some cocktails of an indeterminate nature in episode 9.

And then in episode 10, they go back to tequila shots. Kalinda is uncharacteristically late to the drinks in this episode, which worries Alicia.

When she shows up, a few minutes after Alicia takes her first shot, she reveals that the drama surrounding her relationship with her erratic husband is over. What exactly happened to him is unclear, though when Kalinda says there's no chance of his ever returning, it's hard not to suspect that she killed him. He was a jerk, though, so this is an occasion for tequila.

One of the sweetest of their drinks sessions comes in the next episode, when Alicia is staying at a remote hotel while waiting to be allowed to depose a key witness in a case. Kalinda brings her fresh clothes -- and a bottle of red wine.

They lie in side-by-side beds glumly, chatting about this and that while drinking glasses of red wine. It's cute. It seems like maybe they're on track to be best friends again.

Alicia and Kalinda see each other briefly in the next episode, but after that, don't share a scene for more than two seasons after this hotel tryst. There's no on-screen blowout to explain their bizarre separation, so this is when many (starting with Buzzfeed) speculated that Panjabi and Margulies got in some terrible fight. No one in the press has ever managed to figure out what transpired; it's one of the best-kept secrets in Hollywood.

Whatever happened, though -- and something must have happened -- it kept Alicia and Kalinda apart right up until the very end of season 6.

They sort of reunite in the season's penultimate episode, after Kalinda has fled town to avoid being killed by Lemond Bishop, when Alicia thinks back to two times they'd met before. But the flashback scenes are either filmed in such a way that the two actresses may never have even been in the same room, or are repurposed footage from season 1. Fun fact, though: although this same tug-of-war over Alicia's phone was shown in the drunken bar night in Season 1, Episode 22, the exact moment above is shot from two different camera angles in the two episodes.

In the season 6 finale, they finally reunite for real. Kalinda surprises Alicia at a bar just before she leaves town for good. She orders two tequila shots for old time's sake.

Then, though, something curious happens: Most of the shots in the scene show only one of the two actresses clearly. For that reason, many people started to speculate that they hadn't actually filmed most of it together.

On May 15, TVLine reported, based on some anonymous inside intel, that the scene had indeed been faked. The shots that show only one face clearly were filmed with body doubles filling in for the obscured actor, while Panjabi and Margulies filmed the shots that include both characters separately, and then the footage was merged together in post-production.

The fact that Panjabi and Margulies couldn't overcome their rumored enmity even for a day of filming made the parting -- likely the last time these two characters ever see each other, since Kalinda is now officially on the lam -- even sadder. Kalicia is, or, was, a friendship for the ages. These drinking buddies will live in our hearts and livers forever. And we look forward to revisiting the early season heyday of their relationship many times to come. 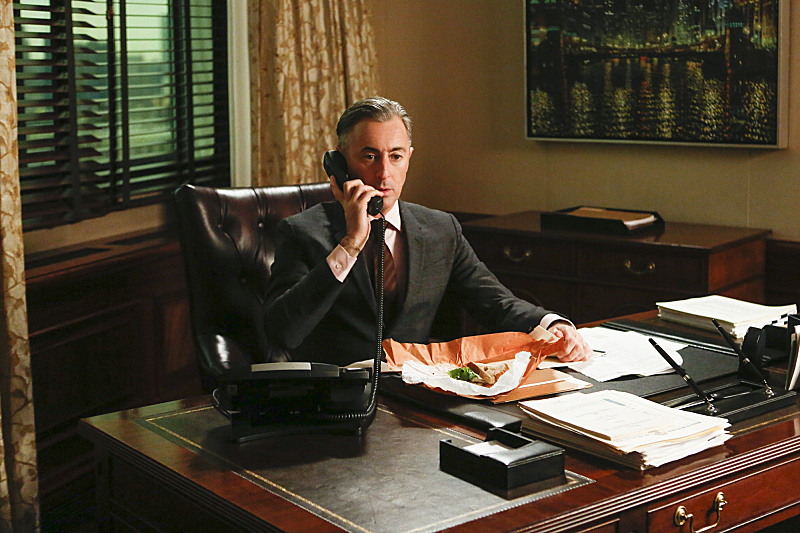