We've gotten used to seeing Alicia Keys in low-key "mom" clothes, often consisting of jeans, leather jackets, chunky glasses and sneakers (trendy Isabel Marant wedge sneakers, but still). But the singer proved she's still got that sexy edge with a teaser pic for her latest album, which she posted on Wednesday on her website.

For her fifth studio album, Keys chose the name "Girl on Fire" because "that’s exactly how I feel!!!" she wrote in a post today. "... I felt like it was time to stop making excuses for any part of my life that I wanted to change. Once I made that choice I became a Girl on Fire, the lion broke free!!"

OK then. So what does a uncaged lion wear? For the album photo, Keys dons a black ensemble by Akris with sheer panels on the sides... and almost on the front. The 31-year-old star doesn't mind showing off some sideboob in the skintight dress (or maybe it's a bodysuit -- we can't tell) and has her hair slicked back, emphasizing her bold makeup. And, um, her body.

A risky look? Sure. But we expect a dose of glamour from the fashionable keys, who was a frequent face at Fall 2012 Fashion Week and recently landed on Vanity Fair's 2012 Best-Dressed List.

See the album art below -- do you like this risque style? 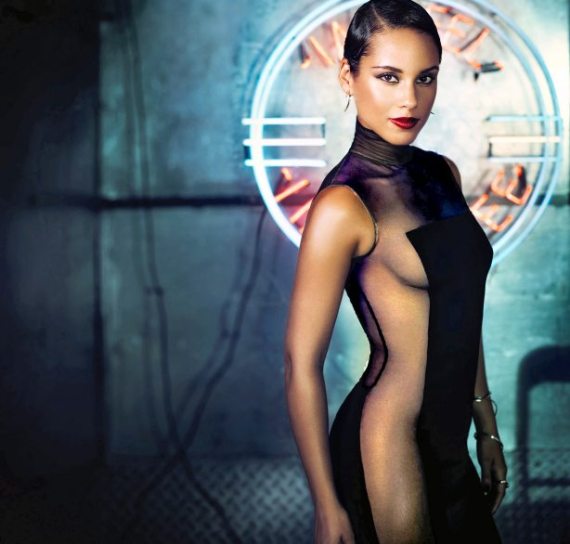 CORRECTION: An earlier version of this article incorrectly stated that the photo was the album cover of Keys' "Girl On Fire." We regret the error.