Hairspray might one day serve as the sign that aliens have reshaped distant worlds, researchers say. Such research to find signs of alien technology is now open to funding from the public.

Science fiction has long imagined that humans could transform hostile alien worlds into livable ones, a procedure known as terraforming. For instance, to colonize Mars, scientists have suggested warming the red planet and thickening its extraordinarily thin atmosphere so that humans can roam its surface without having to wear spacesuits. To do so, plans to terraform Mars often involve vast amounts of greenhouses gases to trap enough heat from the Sun, forcing carbon dioxide frozen on the planet's surface to turn into gas.

If humans might one day terraform planets, aliens with more advanced technology might have already done so. If that's the case, astronomers could look for telltale signs of such changes to reveal that intelligent extraterrestrial life exists. [The Search for Extraterrestrial Life (Video Show)]

"Our hypothesis is that evidence of intelligent life might be evident in a planetary atmosphere," said astrobiologist Mark Claire at the Blue Marble Space Institute of Science, a nonprofit network of scientists across the world.

One group of gases that might be key to terraforming planets are chlorofluorocarbons (CFCs). These nontoxic, long-lived chemicals are strong greenhouse gases and were once often used in hairspray and air conditioners, among many other products.

Transforming a hostile world to one suitable for life is known as terraforming.

CFCs are entirely artificial, with no known natural process capable of creating them in atmospheres. Detecting signs of these gases on far-off worlds with telescopes might serve as potent evidence that intelligent alien civilizations were the cause, either intentionally as part of terraforming or accidentally via industrial pollution.

"An industrialized civilization will be one that will use its planetary resources for fabrication, the soon-to-be-detectable-from-Earth atmospheric byproducts of which could be a tell-tale sign of their activity," said astrobiologist Sanjoy Som of the Blue Marble Space Institute of Science.

Telescopes have currently helped spot hundreds of exoplanets so far and should help detect hundreds more soon. Future observatories could analyze the atmospheres of these worlds, and CFCs should be easy to see, because the way they absorb light is very different from naturally-occurring chemicals.

"We are on the scientific verge of being able to actively look for extrasolar worlds inhabited by technological civilizations," Som said. "We are about a decade away of being able to measure detailed compositions of the atmospheres of extrasolar planets."

Using state-of-the-art computer models of atmospheric chemistry and climate, the researchers plan to discover what visible signs CFCs and other artificial byproducts of alien terraforming or industry might have on exoplanet atmospheres.

"We will then test if these features are detectable over interstellar distances, by severely downgrading our computed signal to mimic the signal quality of next-generation telescopes," Claire said.

Scientists worldwide could then use this data to see if any of the exoplanets discovered so far or to come show evidence of these "technosignatures."

"This SETI proposal is about looking at atmospheric chemistry rather than other previously proposed technosignatures like radio signals or pulsed light beams," Claire said. 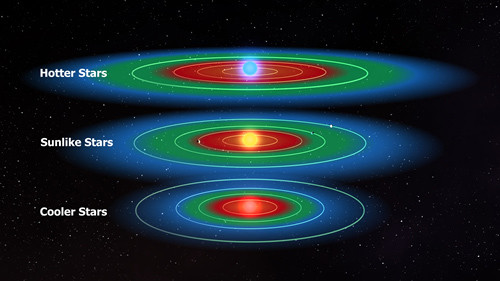 Habitable zones for different stars. An intelligent civilization could allow a planet outside the zone to still be habitable.

Claire added that sulfur hexaflouride is another industrial molecule and greenhouse gas that could serve as a technosignature. Other technosignatures may include unusually large amounts of ammonia or carbon dioxide, when observed alongside gases such as oxygen and water vapor, which are often thought to be common signs of life, Som said.

The researchers are now seeking startup money for their project from the public via the Petridish organization. They hope to raise $24,000 by January 9, 2013.

"This project will move forward only if it is funded. We invite the public to take part and be included in our adventures by pledging a small amount of money to our efforts," Som said. "We are a small 501(c)3 non-profit science organization with a strong emphasis in science communication. All donations are tax-deductible!"

This research could also help astrobiologists discover signs of alien intelligence outside the so-called habitable zones where hunts for extraterrestrial life is often most focused on. There is life virtually wherever there is liquid water on Earth, so habitable zones are often thought of as the areas around stars where liquid water can persist on a planet's surface, given temperatures that are neither too hot nor too cold.

"Artificially warming a body outside of the habitable zone to make it habitable could also be a tell-tale sign of intelligence," Som said. "For example, suppose that in a few thousand years, humans have terraformed Mars. Suppose that an alien species is observing our solar system and finds Earth. In addition, it measures the atmospheric composition of Mars, a planet essentially outside the habitable zone of our sun, and finds elevated greenhouses gasses in addition to water vapor and oxygen. This two-planet system would be a strong indication to them of an intelligent civilization at work expanding its cradle outside of its home planet." 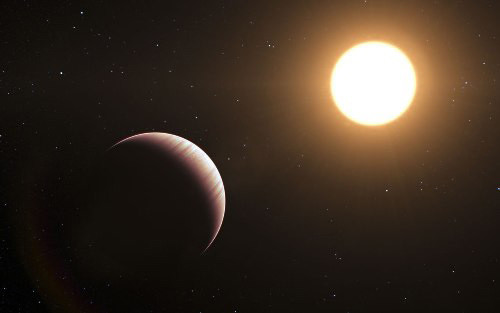 An artist’s impression of the Tau Boötis system. Astronomers are working to detect atmospheres of exoplanets.

This may be the first scientific investigation of what a terraformed planet might look like from afar, and could be a new tool in the search for extraterrestrial intelligence (SETI). It goes without saying that if these efforts help discover intelligent alien life, "the implications will be tremendous, as it will cause a major reassessment of what it means to be human," Som said.

Alien 'Hairspray' Used In 'Terraforming' Planets May Aid In Hunt For Extraterrestrial Life
Active SETI: Attempts To Communicate With Aliens