It's a case of, literally, one hand not knowing what the other is doing. Known as Alien Hand Syndrome (AHS), this rare medical condition causes a person's hand to involuntarily cause havoc, as if it were under the control of a, well, alien influence.

With only about 50 recorded cases since AHS was first detected in 1909, the general symptoms include the sudden reaching or grabbing or hitting oneself (or another person), or even attempting to choke or rip clothing.

The syndrome has become evident in rare cases after some trauma to the brain or following a stroke or brain infection. Patients have reported one of their arms and hands feeling disconnected to their brain as it appears to take on a life of its own.

This still-not-fully-understood problem is the centerpiece of the first episode of "Stuff You Should Know," a new series premiering Saturday on the Science Channel. 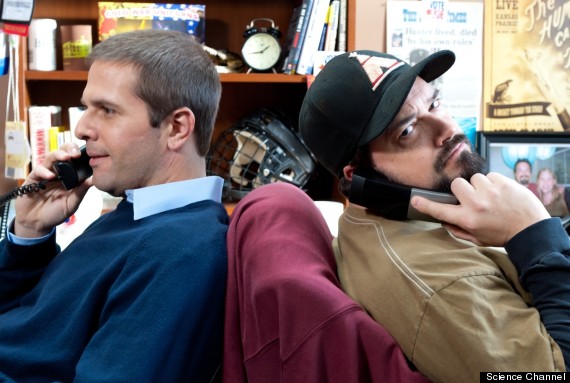 The weekly program, based on the popular podcast of the same name, is hosted by Josh Clark and Chuck Bryant (pictured above left and right, respectively), and follows them through what's essentially a fictional world of their podcast.

In the opening episode, a man allegedly suffering from AHS, arrives at Clark's and Bryant's Atlanta-based podcast factory, where several moments of extreme AHS come alive, and, for a short time, viewers may not fully get that the AHS victim is, in fact, an actor, Mark Ashworth, who was recruited for the segment.

But are Clark and Bryant making fun of an affliction which is considered more a personal nuisance than threat to those few victims of it?

"Also, we are extraordinarily tolerant and we preach tolerance and respect and understanding for other cultures, religions, belief systems, and people with disabilities," Clark said. "The premise of the TV show, of the action in this episode, is funny, but at the same time, I don't think at any point we really crossed any line and we're making fun of people with alien hand syndrome."

Future episodes of "Stuff You Should Know" include topics involving bees, weather modification, flesh-eating bacteria, time travel, the privatization of space travel and the emotional lives of robots.

"I think fans of science will dig it," said Bryant. "Because it's something different and fun, we don't take ourselves too seriously and we don't purport to be experts or scientists or doctors, so it'll be a welcome relief to see science portrayed in a little more fun, humorous way."

His podcast and TV partner agrees. "Anyone who's even remotely curious in how there's something interesting to absolutely everything -- whether it's something as crazy as alien hand syndrome or as far out as time travel -- to very mundane stuff, like the sun," said Clark.

"There's always something very, very interesting in any topic whatsoever, and I think that anybody can attach to that sentiment or connect to it. Just us doing our thing automatically reaches out to just about anyone who has a curious bone in their body."

Check your local listings tonight for the premiere of "Stuff You Should Know" on the Science Channel.