While it's true that Russia has a very sophisticated air defense system capable of engaging and taking down targets at near-space altitudes -- as reported by RIA Novosti, Russia's leading news agency -- there's one potential enemy that country isn't ready to confront: aliens from space.

During a recent conference at the Titov Main Test and Space Systems Control Center near Moscow, a journalist asked if Russia's vast array of security systems could protect the country from a possible extraterrestrial invasion, according to Russia Today.

"So far, we are not capable of that," center deputy chief Sergey Berezhnoy responded. "We are unfortunately not ready to fight extraterrestrial civilizations. Our center was not tasked with it. There are too many problems on Earth and near it."

OpenMinds.tv reports that the Titov space center, controlled by the Aerospace Defense Troops, monitors space objects and identifies potential threats to Russia in space and from space -- but there doesn't seem to be a clearly defined plan from which to defend against ruthless ETs. 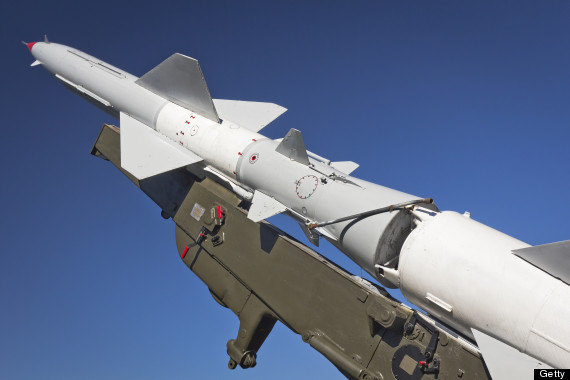 Taking this to the next level includes asking if any single or group of nations on this planet could successfully fend off an alien invasion.

To be sure, no government has ever confirmed the existence of a spacecraft under ET control. Many countries over the years, however, have scrambled pilots to chase unidentified flying objects. While these objects could have been many things, if they were from a distant planet, we might assume that the technology needed to travel so far vastly exceeds our own capabilities.

To explore that issue, it helps to consider if there has ever been a single instance where a UFO encounter by military or civilian eyewitnesses could have been construed as a sample of earthlings confronting a superior, out-of-this world technology.

In 1969, the United States Air Force terminated its 20-year UFO study known as Project Blue Book. Of the 12,618 sightings reportedly studied by the military, 701 remained "unidentified."

Project Blue Book -- and, therefore, the military and government -- publicly concluded that 1) no UFO investigated by the Air Force indicated any national security threat; 2) no UFOs investigated represented "technological developments or principles beyond the range of present-day scientific knowledge"; and 3) there was no evidence "indicating that sightings categorized as 'unidentified' are extraterrestrial vehicles."

Despite those official pronouncements, other things happened that, when truly examined, appeared to contradict the government's stance on UFOs. Was the public lied to about UFOs for many decades and if so, why?

The following items are just the tip of what may be a very big iceberg. These haven't been fabricated -- all are true events.

1947: Amid reports of disc- or saucer-shaped objects outperforming any known aircraft, a top secret evaluation was performed by the Air Material Command, headed by Lt. Gen. Nathan Twining, which stated that the reported circular objects were "real, not imaginary, flat on the bottom, domed on top and capable of intelligent, evasive maneuvers."

1966: U.S. Treasury Agent Donald Flickenger and several Border Patrolmen in North Dakota witnessed an astounding display of maneuverability by a UFO which defied the known and accepted scientific principles of physics and gravity. "What I saw was a metallic object that appeared to be about 30 feet in diameter and was probably about 15 feet tall at its highest point -- disc-shaped, no sound to the object at all. It hovered in our area for about three minutes, about 20 to 30 feet off the ground. Suddenly it rose up, turned over on edge, and the only thing I could see at that point were three knob-like structures that were sticking out from the underside of the object. It started spinning very rapidly, and as it spun, it started lifting up in the air and picked up speed, and all of a sudden, with a real sharp burst of speed, shot straight up in the air and was gone in a matter of seconds!"

1973: A terrifying encounter took place between a four-man crew aboard an Army helicopter and a UFO over Ohio. The mid-air drama was witnessed by several ground observers and is considered one of the most impressive sightings in history. The helicopter commander, Maj. Larry Coyne, and his crew thought at first that the light on the horizon was a radio tower beacon: "The crew chief informed me that the light was closing on the helicopter -- coming at us on a collision course," Coyne told this reporter in 1975. "I observed that the object became bigger and the light became brighter, and I began to descend the helicopter toward the ground to get out of the collision course path. It was like a missile locked onto the helicopter. We braced for impact and I looked up and observed this craft stopped directly in front of us -- stopped -- it was hovering right over the helicopter!" Coyne and his crew described the craft as "cigar-shaped, no wings, no vertical or horizontal stabilizer, approximately 60 feet long and 20 feet in height."

Coyne went on to describe how a bright green light came out of the UFO and turned the whole cabin of the helicopter green. And then they realized that their helicopter was somehow being pulled up, "climbing 1,000 feet a minute, with no changes in the control. We went from 1,700 feet to 3,500 in a matter of seconds and never knew it!" The UFO eventually released the helicopter and the Army didn't attempt to prevent the crew from telling their story to the press. Several years later, Coyne was allowed -- through efforts from this reporter -- to recount the UFO incident in front of the Special Political Committee of the United Nations -- a presentation, incidentally, that the U.K. tried to prevent from happening.

Watch a television segment focusing on the Coyne UFO-Helicopter encounter:

1980: Peruvian air force fighter pilot Col. Oscar Santa-Maria was ordered to takeoff and shoot down a sphere-shaped UFO that was in restricted airspace near an air base. Of the more than 20-minute encounter, Santa-Maria, an expert pilot, told a panel of former members of Congress earlier this year, "It was trying to avoid me while I was pursuing it and I was trying to fire. When I first fired, these were bursts of 30 millimeter shells -- a single one can destroy a truck. I shot 64 and nothing happened at all. The possibility of not hitting my target was practically impossible." The object Santa-Maria chased was 30 feet in diameter, with a dome on top, no visible engine, wings or windows. "Once I landed, I met with intelligence officers and we looked at all catalogues to see what possible spy object this might have been, but there was nothing similar to what I had observed, and we were unaware of any type of technology like this on Earth that existed."

1997: Former Arizona Gov. Fife Symington mocked thousands of people who claimed to see mysterious lights over Phoenix. He even brought out one of his staffers dressed in a cheesy ET costume during a press conference. Ten years passed before Symington apologized and admitted that he, too, witnessed an extraordinary, boomerang-shaped unknown flying craft over Phoenix. "I was expecting to see something in the distance, but was awestruck when this thing went overhead, moving steadily and quietly," Symington told HuffPost, also admitting a taboo about elected officials and UFOs. "If you hold a high public office, then the minute you start talking about UFOs or extraterrestrials, the media immediately tees off and ridicules it. If you're an elected official, you really need to be careful about what you say, because the media can just totally destroy your credibility."

There are many more credible stories like the above UFO encounters. Yet, they seem to contradict the ongoing official Air Force contention that there's nothing of technological or scientific interest worth pursuing.

Someone is obviously not telling the truth.

It would probably be a good idea if the countries of the world were united as Earthlings in case some evil-doer extraterrestrials decide to stop by to check out our vulnerabilities as a species. Better to be friends instead of appetizers.