Have scientists found alien life in our atmosphere?

Researchers from the University of Sheffield in England think so. They reported that tiny organisms that came back aboard a balloon sent high into the stratosphere are too big to have floated up from the surface of our planet. 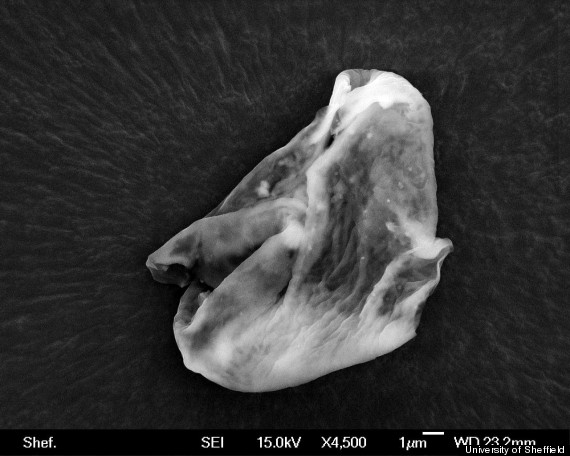 A scanning electron micrograph of one of the diatoms found on a microscope stub aboard the balloon.

“In the absence of a mechanism by which large particles like these can be transported to the stratosphere we can only conclude that the biological entities originated from space," Dr. Milton Wainwright, astrobiology professor at the university, said in a written statement. "Our conclusion then is that life is continually arriving to Earth from space, life is not restricted to this planet and it almost certainly did not originate here.”

Wainwright told The Independent that he's 95 percent certain the organisms come from space.

But other scientists aren't so sure.

"I'm very skeptical," Dr. Seth Shostak, senior astronomer with the SETI (Search for Extra-Terrestrial Intelligence) Institute, told The Huffington Post in an email. "This claim has been made before, and dismissed as terrestrial contamination."

The researchers said they took precautions to avoid picking up bits of terrestrial life during the experiment. Microscope stubs on the balloon were exposed to the atmosphere only at altitudes of 22 to 27 kilometers (13.7 to 16.8 miles). They acknowledged that there could be some mechanism for transporting large particles high into the atmosphere. But since no such mechanism has been discovered, they said, the next likely explanation is that the "diatoms" come from space.

"They should try a lot harder to look for more mundane ways this beastie made it up there," astronomer Dr. Philip Plait wrote for Slate magazine. "They dismiss other pathways, just stating they won’t work, but I’m unconvinced... In other words, if they can’t figure it out, it must be aliens. This 'god of the gaps' argument leaves me underwhelmed."

It's not the first time the Sheffield team has come under fire. Astrobiologist Dr. Chandra Wickramasinghe, another member of the research team, was criticized back in January for reporting that fossils inside a meteorite discovered in Sri Lanka were proof of extraterrestrial life.

Wickramasinghe believes the organisms found in Earth's stratosphere may have hitched a ride aboard meteors from other planets, suggesting that life exists in other parts of the galaxy, as reported by the University Herald.

The new findings were published in the Journal of Cosmology -- which itself has been viewed skeptically by some scientists. Dr. Sean Carroll, an astrophysicist at Caltech, told The Huffington Post in an email that it "is not a serious journal."

Wainwright said the next step would be to perform "isotope fractionation" on the sample recovered from the balloon -- essentially, analyzing the ratio of certain carbon isotopes in the organisms to determine their origins. The team hopes to confirm their findings by repeating the experiment in October during the Halley's comet meteor shower.

“If life does continue to arrive from space then we have to completely change our view of biology and evolution,” Wainwright said. “New textbooks will have to be written!”

If the team compiles enough evidence to convert the skeptics, that is.