A hot alien planet that's as big as Jupiter and cobalt blue in color has been spotted crossing in front of its parent star in the X-ray spectrum — a first for scientists.

Nearly two decades ago, researchers started detecting exoplanets by observing the dips in starlight that result when these alien worlds pass in front of their stars. But scientists had never before observed an exoplanet eclipse, called a "transit," in X-ray light.

"Thousands of planet candidates have been seen to transit in only optical light," study researcher Katja Poppenhaeger, of the Harvard-Smithsonian Center for Astrophysics (CfA) in Cambridge, Mass., said in a statement. "Finally being able to study one in X-rays is important because it reveals new information about the properties of an exoplanet." [See the exoplanet eclipse in X-ray light (Video)]

Poppenhaeger and her colleagues focused on the "hot Jupiter" exoplanet HD 189733b, which is similar in size to the gas giant Jupiter but is scorching hot. HD 189733b is more than 30 times closer to its star than Earth is to the sun, which results in temperatures over 1,832 degrees Fahrenheit (1,000 degrees Celsius) and a year that lasts just 2.2 days. 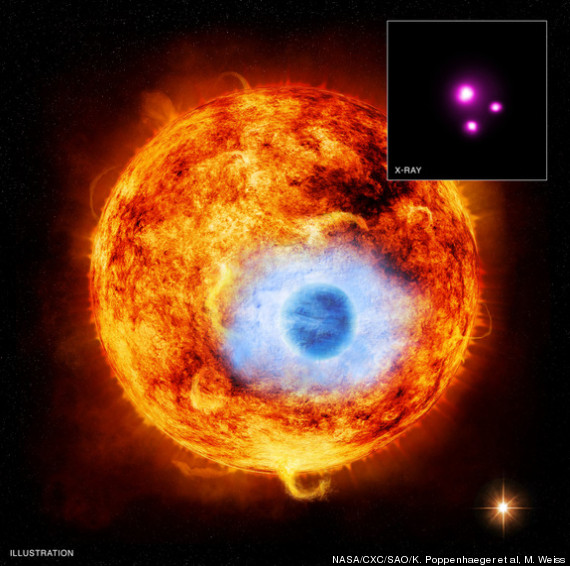 This graphic depicts HD 189733b, the first exoplanet caught passing in front of its parent star in X-rays. The inset contains the Chandra image of HD 189733.


At 63 light-years from Earth, the alien planet HD 189733b is the closest hot Jupiter to our planet and is often targeted by astronomers who want to study its hostile environment. Observations have also revealed that the planet rains glass in howling 4,350 mph (7,000 km/h) winds, and scientists recently used NASA's Hubble Space Telescope to confirm its deep blue hue.

In the new study, the researchers used NASA's Chandra X-ray Observatory to watch six transits of HD 189733b and the European Space Agency's XMM-Newton spacecraft to observe one. They found that the dip in X-ray intensity during these transits was three times greater than the corresponding drop in optical light.

"The X-ray data suggest there are extended layers of the planet's atmosphere that are transparent to optical light but opaque to X-rays," study researcher Jurgen Schmitt of Hamburger Sternwarte in Hamburg, Germany, explained in a statement. "However, we need more data to confirm this idea."

The scientists already knew that ultraviolet and X-ray radiation from the planet's star was destroying its atmosphere over time, and they estimate that this evaporation is occurring at a rate of 220 million to 1.3 billion pounds (100 million to 600 million kilograms) of mass per second.

The main star in HD 189733b's system has higher levels of magnetic activity and appears about 30 times brighter in X-ray observations compared to its dim red companion star. And researchers think it can thank the huge exoplanet for its young looks.

"This star is not acting its age, and having a big planet as a companion may be the explanation," Poppenhaeger said. "It's possible this hot Jupiter is keeping the star's rotation and magnetic activity high because of tidal forces, making it behave in some ways like a much younger star."

The research will be detailed in the Aug. 10 edition of The Astrophysical Journal.