An image taken in 2008 by the Gemini Observatory has finally been confirmed to be the first direct image taken by a ground-based telescope of an "alien planet" (a planet outside our solar system).

As Geekosystem notes, "While we have images of other alien planets -- a.k.a. "exoplanets" -- such images have been composed via indirect means of observation, such as gravitational fluctuations, rather than as true photographs."

In 2008, astronomers snapped an image of the exoplanet, which is eight times the mass of Jupiter, "using visible light observations from telescopes on Earth," according to Space.com.

Astronomer David Lafreniere, the leading researcher on the team that discovered the star, told Space.com that additional research was needed to confirm that the planet was indeed orbiting the star. "Without adaptive optics," Lafreniere admits,

we would simply have been unable to see this planet [...] The atmosphere blurs the image of a star so much that it extends over and is much brighter than the image of a faint planet around it, rendering the planet undetectable. Adaptive optics removes this blurring and provides a better view of faint objects very close to stars.

The planet can be seen circled in red in the photo below. The star is shown in the center of the image. (via Discover) 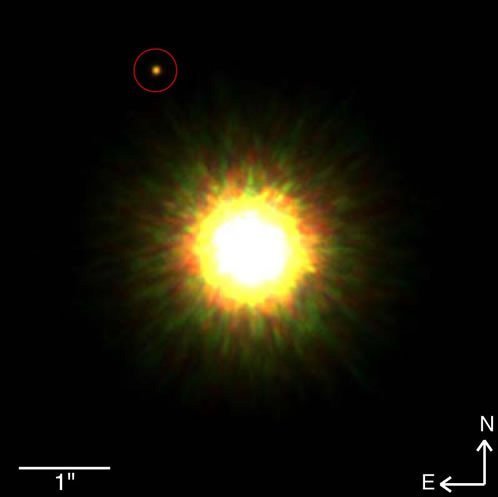