Astronomers have discovered an alien planet that wobbles at such a dizzying rate that its seasons must fluctuate wildly.

Throughout all of the planet's fast-changing seasons, however, no forecast would be friendly to humans. The warm planet is a gassy super-Neptune that orbits too close to its two parent stars to be in its system's "habitable zone," the region where temperatures would allow liquid water, and perhaps life as we know it, to exist.

The faraway world, which lies 2,300 light-years away in the constellation Cygnus, was discovered by NASA's planet-hunting Kepler space telescope. Dubbed Kepler-413b, the planet orbits a pair of orange and red dwarf stars every 66 days. [Gallery: A World of Kepler Planets]

Kepler was designed to detect exoplanets by noticing the dips in brightness caused when these worlds transit, or cross in front of, their parent stars. Normally these transits occur in a regular pattern, but Kepler-413b behaved strangely.

"What we see in the Kepler data over 1,500 days is three transits in the first 180 days (one transit every 66 days), then we had 800 days with no transits at all," study lead investigator Veselin Kostov, of the Space Telescope Science Institute and Johns Hopkins University, said in a statement. "After that, we saw five more transits in a row."

Kostov and colleagues concluded that the planet's wobble must be causing it to move up or down relative to our view, so much so that it sometimes doesn't appear to cross in front of its parent stars. (A NASA statement compared the planet's motions to a child's spinning top on the rim of a wobbling bicycle wheel rotating on its side.) 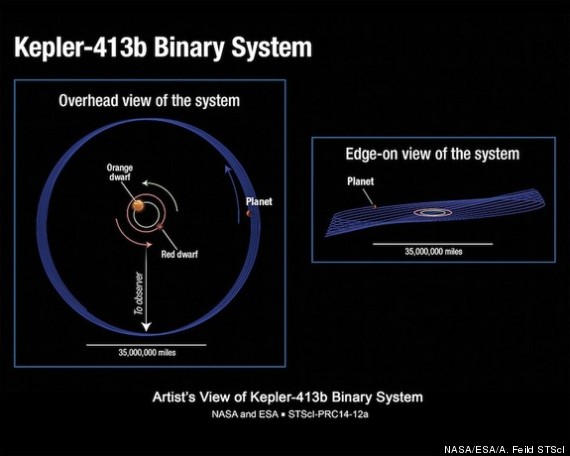 This illustration shows the unusual orbit of newly discovered planet Kepler-413b. The alien world circles around a close pair of orange and red dwarf stars and the tilt of its spin axis can vary by as much as 30 degrees over 11 years, scientists say.

The scientists determined that the planet's axial tilt can vary by as much as 30 degrees over 11 years,. For comparison, Earth's tilt has shifted 23.5 degrees over 26,000 years. The researchers say it's amazing that this planet is wobbling, or precessesing, so much on a human time scale, and they say it's possible that there are other planets like Kepler-413b awaiting discovery.

"Presumably there are planets out there like this one that we're not seeing because we're in the unfavorable period," Peter McCullough, a team member from STScI and JHU, said in a statement.

Kostov and colleagues are still investigating what causes the extreme wobble of the gas planet, which has a mass about 65 times that of Earth. They say Kepler-413b's orbit may have been tilted by other planets in the system or by a nearby star exerting gravitational influence.

The research was detailed in the Jan. 29 issue of The Astrophysical Journal.

Kepler was disabled last year after suffering a major failure, but engineers are have developed a possible new mission that would use the spacecraft in its compromised state. The $600 million Kepler mission launched in 2009 and has detected more than 3,500 exoplanet candidates to date.