What does the edge of space sound like? Pretty darn strange. Just have a listen to these acoustic signals recorded in the stratosphere some 22 miles above Earth's surface (above).

At frequencies below 20 hertz, these so-called "infrasounds" are too low for the human ear to hear. But sped up by a factor of 1,000, they sound "kind of like 'The X-Files,'" Daniel Bowman, a graduate student in geophysics at the University of North Carolina at Chapel Hill and the leader of the recording effort, told Live Science.

Up, up, and away. For the research, conducted as part of NASA's High Altitude Student Platform program, Bowman attached microphones to a helium balloon and then sent it on a 9-hour flight above New Mexico and Arizona, according to Live Science. The flight took place on Aug. 9, 2014.

It's not the first time recordings of atmospheric infrasound have been made. But in many previous efforts, the recordings were made on the ground -- and extraneous noise was a problem.

"I decided to try putting microphones on balloons to reduce the wind noise (the balloon moves at the same speed as the wind) and to see if I could find sounds that don't make it down to Earth," Bowman told The Huffington Post in an email.

Decoding the mystery. As for what the new stratospheric sounds could be, Bowman and his colleagues are still working to interpret them -- though they do have some guesses.

"We think that they are probably a combination of thing happening far away (commercial aircraft, waves in the Atlantic ocean, air turbulence, even air conditioners in buildings) and things happening nearby (cables vibrating on the balloon and cosmic rays hitting the sensor)," he said in the email.

If you were hoping the signals might be evidence of aliens, you're out of luck.

"There is no evidence to suggest that these signals are from extraterrestrial sources," Bowman said. "Sound cannot travel through space, so whatever is generating it must be located within about 140 km (approximately 90 miles) of the Earth's surface."

The research was presented in Pasadena, Calif. on April 23 at the annual meeting of the Seismological Society of America. 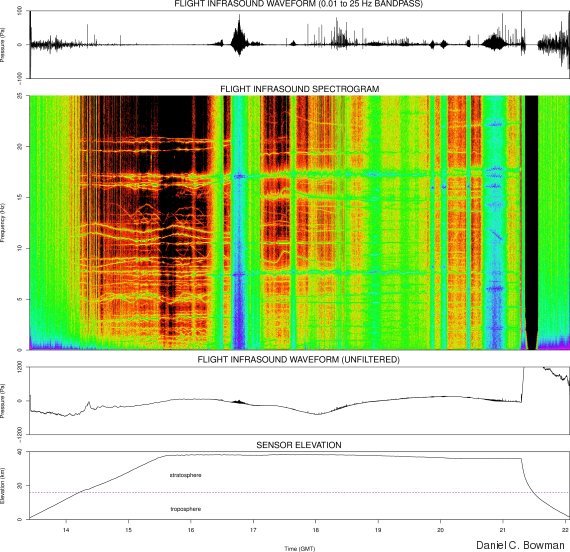