Imagine if you were confronted with overwhelming plastic pollution every single day.

That's life for Rajeesh, the supervisor and resident of Thilafushi, an artificial "trash island" in the Maldives where 300 to 400 tons of trash are dumped every day.

To combat the literal mountains of trash in the country's only landfill, Rajeesh burns some piles, but his health suffers for it.

Adventure filmmaker and reality star Alison Teal spoke with Rajeesh about the fumes he inhales and the ailments he's suffered as a result. The exchange (start at 8:42, above) is featured in the latest episode of her web series, "Alison's Adventures."

Teal's mission is to shed light on the devastating plastic pollution she saw in the Maldives while she was filming Discovery's survival show "Naked and Afraid."

The Maldives, as Teal explains, is the lowest-lying country on earth and is especially susceptible to gathering the world's plastic pollution via the ocean's currents.

"This is not a Maldives issue," Teal told The Huffington Post. "This is a global issue. It is my hope that through this film, people will see the direct effect plastic is having on our world and join me in reducing our plastic footprint."

The heaps of plastic bottles and debris seen in the Madlives, Teal added, could be recycled and turned into useful products. Her signature pink bikini, for example, was made from recycled plastic that was turned into thread.

"I really hope people watch it and really get it and think, holy crap, we really need to change the way we do things," Teal said. 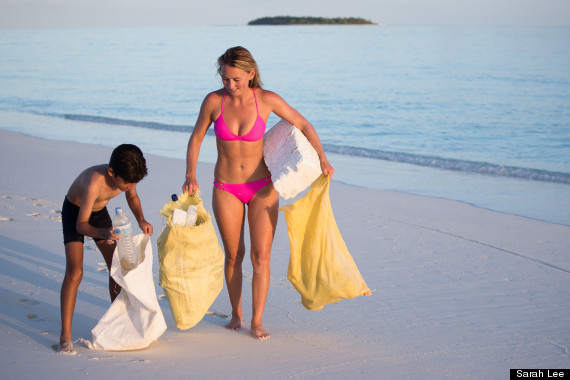 Teal has spent the last decade traveling around the world and producing and starring in her web series, which she now offers for free online. Each episode highlights a serious environmental or social issue with a funny and family-friendly storyline.

"Traveling as a child, I never got to watch TV, but I would see Disney films on the airplane between countries," she told HuffPost. "Since then, it has been my dream to create real life Disney films with magical stories and real characters from around the world."

With these free films that highlight stories like Rajeesh's, Teal hopes that she can "inspire students, parents and teachers to become a part of the solution," she says. "I'm your virtual passport to the world."

If you want to support "Alison's Adventures," learn more about her GoFundMe campaign here.

Meet Rajeesh, The Man Who Has To Live With Our Plastic Pollution
Green Celebrities