Alison Gopnik and her fellow developmental psychologists have devised remarkably clever experiments to measure the hidden intellectual capacities of healthy babies. Tricking babies into thinking that some experimenters prefer goldfish crackers while others prefer broccoli, for example, yields 18-month-olds who offer each researcher whichever food the researcher appeared to prefer. So much for assuming that empathy only develops after college. Findings such as these amaze skeptics who view intelligence as a monopoly of adults. Many new parents nowadays find comfort in the newfound brilliance that their tiny, non-verbal children may demonstrate in laboratory settings. But what implications do these lab findings hold for the day-to-day experiences of babies and those who care for them? How are the biological capacities of infants expressed, manipulated, and interpreted by parents and other caretakers around the world?

Anthropology offers answers. Studying contexts ranging from Pygmy hunter-gatherers to middle-class families in Los Angeles, anthropologists are charting new frontiers of knowledge concerning the many worlds of babies and those who care for them. Some of the new findings even expand the boundaries of the biological framework on which psychologists may rely.

Consider the simple task of sitting. Child development textbooks, and the hundreds of parenting books that develop from them, inform us that at six months, most healthy infants sit up on their own, without keeling over. But in sub-Saharan Africa, children routinely sit up unassisted at four months. A two-month difference may not sound like much to an adult. But for a six-month-old, that's a third of a lifetime.

What accounts for the significant difference? Across the African continent, many babies spend most of their daytime hours (whether awake or asleep) wrapped around the back of an older person. (This might be their mother, other adults, or older children.) Attached in a quasi-sitting position -- legs wrapped around the carrier's waist -- the muscles necessary to sit up independently develop earlier in these children than they do in babies who spend their daytime hours either lying prone in a crib or playpen, or semi-reclining in an infant seat. In fact, caregivers in many African communities may intentionally work to develop early sitting muscles in their infants. In Baganda communities in Uganda, for example, adults routinely seat one- to three-month-olds on their laps, in effect training them to sit independently. In these fiercely social communities where life is lived outdoors, adults consider it essential that children sit up as early as possible -- to communicate actively with those around them.

Elsewhere, spiritual factors may determine how babies are held. What does religion have to do with holding a baby? In Bali, everything. The mainstream religious tradition on this Indonesian island -- a mixture of Hinduism and indigenous, local practice -- classifies babies as reincarnated ancestors, and thus divine gifts from the gods for the first three to seven months of their lives (depending on the family's rank). With this spiritual profile, adults hold babies up high, as befitting other deities; certainly, babies are never put on the ground or floor -- a space deemed too profane for small gods. The day-to-day mandate for caretaking could not be more clear. 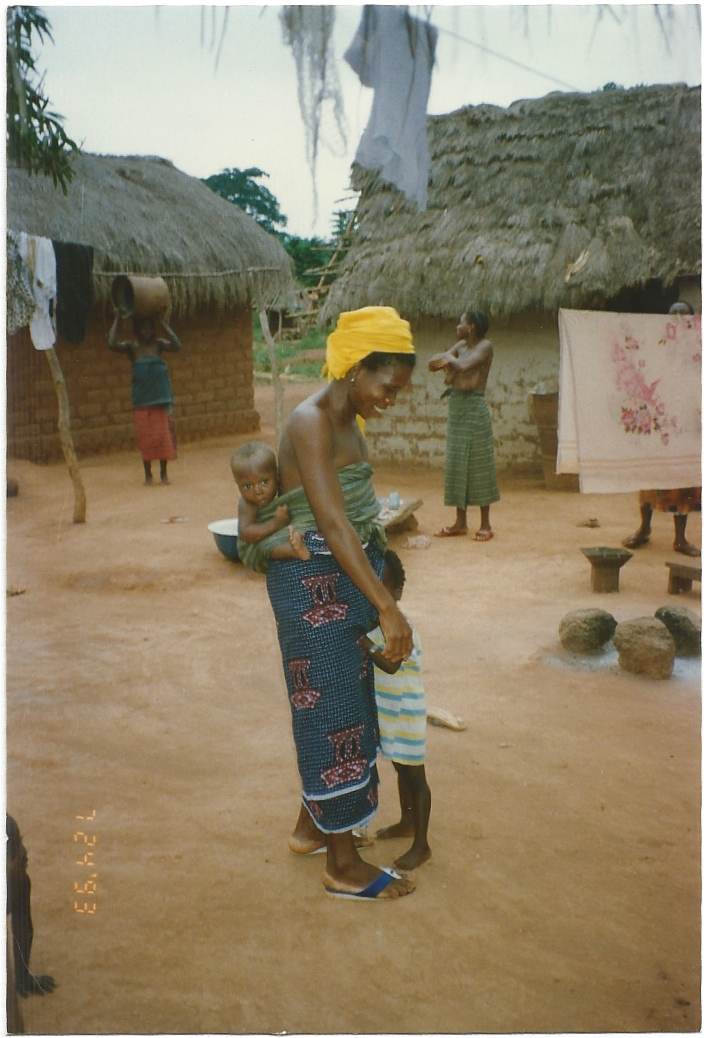 In this village in Côte d'Ivoire, a Beng baby learns to sit from an early age by being wrapped around the waist of her mother or another person. The muscles necessary to train her body to remain upright while sitting develop earlier than they do in her Western counterparts who remain prone or semi-reclining during most of their daytime hours. (Photo: Alma Gottlieb)

Even sleeping, that seemingly most biological of body habits, has hidden social foundations based in cultural values. What does "sleep like a baby" actually mean? Quite a lot of different lessons, it turns out -- depending on where in the world the baby is sleeping.

"Shhhh -- baby sleeping" is a common sign on the doors of many babies' rooms across middle-class, Euro-America. The goal here is to allow a baby to take a good, long nap -- freeing the mother to rest, or get a little work done; training the baby to become independent early; accustoming the baby to the family's schedule; and training the child's young body into a life organized by the clock. In these households, the presumed dangers of "co-sleeping" evoke culturally scary risks ranging from biological (rolling over and smothering the infant) to sociological (promoting "dependence"). 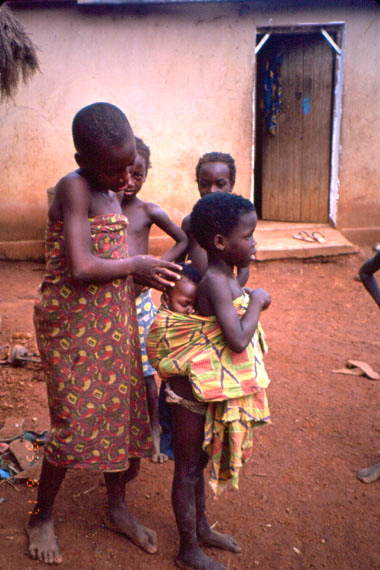 This Beng baby learns to sit up even while attached to a girl so young, she needs help securing the baby to her back. (Photo: Alma Gottlieb)

Yet in parts of the world ranging from Japan and India to nearly all of Africa, parents routinely come to the opposite conclusion. Aiming to promote "interdependence" rather than "independence," co-sleeping families (which may include mothers, fathers, grandmothers, and/or older siblings at various points of the life cycle) extol the virtues of small children snuggling up with larger bodies to sleep. They may not be aware of the latest research by biological anthropologist James McKenna on the health advantages of co-sleeping for infants, but they intuitively grasp the emotional and social advantages.

"Use your intuition," many well-wishers advise new parents. "Use your common sense," my own mother urged me when I begged for advice about how to calm my frequently-bawling first child. But anthropologists now tell us that when it comes to child-rearing, "common sense" may be far from common.

Alma Gottlieb is a member of the American Anthropological Association.