Blogs and other digital media have become an important factor in a restaurant's success. But just ask any chef if she would rather have a Michelin star or a nice write-up by a blog and you can guess the answer. Aliya LeeKong is the Culinary Creative Director at Junoon, a restaurant in New York City's Flatiron District, which just received a Michelin star. This is what every chef works for but LeeKong's story of how she arrived in one of New York's Very Important Kitchens is a little different. Just as Paul Gauguin left Paris' Bourse and the life of a stockbroker for a life in art, Aliya LeeKong left behind a life in banking for a life in food. I interviewed her to find out more about her.

Who is Aliya LeeKong and where is she going?
Tough to answer in a sentence or two! But, I think what I like to call my "cultural layers" describe me best -- American-born, daughter of Tanzanian and Indo-Pakistani immigrants, grew up in suburban Florida, travel at every free moment but call New York City home. I'm a Brown grad with a Columbia MBA and a Grand Diplôme in Culinary Arts from French Culinary Institute. I'm equally inspired by fall-off-the-bone BBQ ribs, preferably North Carolina-style, as I am by an East African curry. Cooking and culinary discovery is my biggest joy. I'm lucky to be married to a man with Trinidadian-Chinese roots (thus, LeeKong...) who is as multi-layered as I am. I'm trying to bring what I call my Exotic Table to the world, one plate at a time.

"Cooking is like love. It should be entered into with abandon or not at all."
Harriet Van Horne

You had a successful career in banking and dropped it all for cooking -- what happened?
Personal evolution. I was working insane banking hours and then coming home and throwing myself into cooking all night. My downtime at work was spent day-dreaming up dishes and planning elaborate meals. Many days, I was sleeping around four hours a night so I could spend more time cooking. The more I worked at my job, the more I retreated into cooking to recharge myself. I finally realized that it was foolish to keep working at a job that wasn't feeding me spiritually the way cooking does. I dropped out of business and enrolled in culinary school. It was the best decision I ever made.

What gave you the impetus to change?
Quite simply, the desire for authentic happiness. I understood that if I continued on my path, I was risking my personal connection to this world, to my cultural history and myself. I didn't want to trade off anymore. I wanted more from my passion of cooking, a deeper meaning and scope of influence -- the decision was frighteningly easy.

How did you get started?
I started out at the French Culinary Institute to ground myself in classical technique and then pursued a cultural diversity of experience spending time in kitchens in and around New York City including Jean Georges, Devi, and Per Se. Culinary school was my primary education and I consider travel my culinary grad school. It's an important part of how I keep developing as a chef. I continue to contextually learn in restaurants and people's homes across the globe, and each experience is equally thrilling -- I learn new things everywhere from a family's home in South Africa to my husband's Aunt Cherry in Port of Spain, Trinidad and even over an open flame in rural Turkey.

How does it feel to be part of a restaurant that receives a coveted Michelin star?
That is indescribable. At Junoon, I focus on seasonality in the dishes and the menu and creating recipes that bridge the gap between the Eastern and Western palate. You put your heart into feeding people, striving for culinary excellence, and being non-traditionally traditional about it; it's beyond the concept of work. Emotionally, it's reassurance for me that I'm doing what I'm supposed to be doing and beyond that, I'm just incredibly proud to be part of such a hard-working team.

What are your goals beyond Junoon?
My goals are to create a familiarity not only with unusual spices and flavors in the American household, but also with global cultures and even the mosaic culture we have here in the States. We are visual beings, and I believe media -- internet, TV and print -- is the best platform to reach people. I'd like to develop cooking and travel content that showcases our similarities, touch points, and crossovers and that, most simply, teaches people how to put an exotic twist on their everyday meals.

Would you ever consider going back to work in banking?
Not for anything in the world! 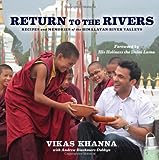 Return to the Rivers
by Vikas Khanna