Everyone eats McDonald's. Some people say they don't, or they go for long periods of time without it, but they always come back around out of necessity or nostalgia or the need to dip things in Sweet & Sour sauce. The issue for most people who are not McDonald's connoisseurs is that they don't try new things. I'm certainly guilty of that -- I don't go enough to feel like I want to try a new sandwich when I'm there. I just want one of the three orders I've been getting since I was 4, plus a Christmas Muppet Happy Meal toy.

So, in an effort to allow other casual McDonald's users a cheat sheet to the myriad sandwiches McDonald's offers that they're potentially missing out on, I decided to try every single McDonald's sandwich available (McWraps didn't count), and rank them according to taste. Because there are 22, I did not eat them all at once. I am not a masochist. I tried to get four or five sandwiches at a time and enact the three-bite rule, or, in the case of seasonal offerings like the McRib, tried to remember what they taste like. But anyway, enough about my weight gain, here they are, from 22 to 1.

More: What Your Favorite Fast-Food Chain Says About You

22. Filet-O-Fish
Calories: 390
What they say: Dive right in and enjoy our wild-caught fish from our sustainable fishery, topped with melty American cheese, creamy tartar sauce and served on a soft, steamed bun.
What I say: The worst, most guilt-stricken part about this? I am a confirmed Catholic, and I still don't have any place for this fried fish sandwich, even on Fridays. Sorry Lord, it's not you.

21. BBQ Ranch Burger
Calories: 340
What they say: A 100% beef patty seasoned with a pinch of salt and pepper, then topped with melted white cheddar, zesty barbecue ranch sauce and crispy tortilla strips, all on a classic bun.
What I say: I'm not sure what to make of this. One part of it reminds me of when you put chips on your sandwich, which is delicious. But the other part just seems like the burger version of a BBQ chicken salad at CPK, but without the crucial cold crunch of that jicama. WHERE IS THE JICAMA?

20. Bacon Cheddar McChicken
Calories: 490
What they say: A seasoned McChicken patty topped with thick cut Applewood smoked bacon, melted white cheddar, crisp shredded lettuce and mayo, served on a classic bun.
What I say: You're going to sense a theme here, so I might as well get it out of the way. I love bacon. I love it just as much as the next person who eats a moderately alarming amount of bacon. But I don't love the bacon at McDonald's. I think it distracts rather than adds value. Also, while I'm just revealing everything, if you saw my chicken sandwich taste-test, you'll know I don't like cheese on fried chicken. It doesn't need it. So really, this McChicken had no chance. 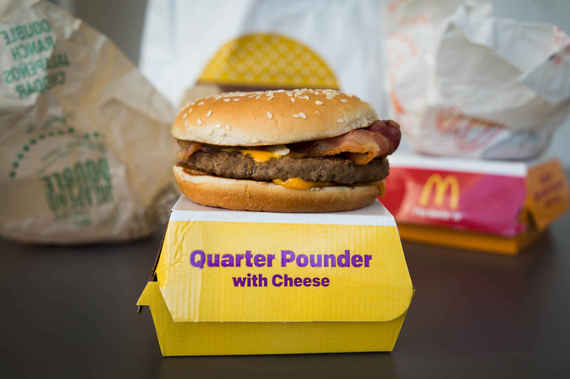 19. Bacon & Cheese Quarter Pounder
Calories: 600
What they say: A quarter pound of juicy, 100% beef with melty American cheese, thick-cut Applewood smoked bacon, tangy pickles, crisp slivered onions, ketchup and mustard, stacked on a toasted bakery-style bun.
What I say: This has nothing to do with the Quarter Pounder itself, or even really the bacon. It's the "bakery-style bun." It's too dry and doesn't blend well with the meat and toppings. McDonald's buns usually do a great job of staying out of the way, but this did not.

17. Daily Double
Calories: 430
What they say: Two 100% beef patties, season (sic) to perfection, and melty American cheese topped off with lettuce, slivered onions, mayo and one juicy slice of tomato.
What I say: This is like a normal double burger at a diner, which was a peculiar experience having it at McDonald's. I resisted the urge to pick off the tomato because I am a man of discipline and honor. 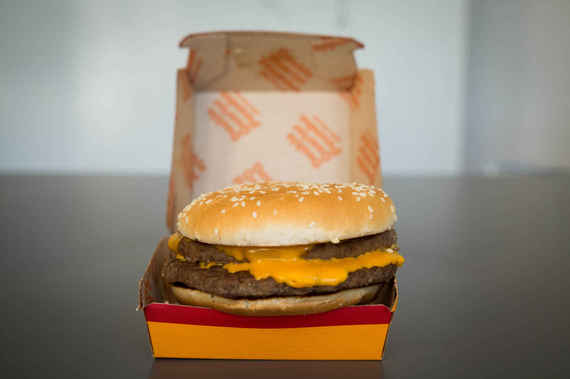 16. Double Quarter Pounder
Calories: 740
What they say: Two quarter pound 100% beef patties simply seasoned with a pinch of salt and pepper, two slices of melty cheese, slivered onions and tangy pickles all on (sic) sesame seed bun.
What I say: I prefer thinner, griddled-style patties on my burgers, so the Quarter Pounder is always a little much for me. Now double that up, and it's just too damn aggressive.

15. Premium Grilled Chicken Bacon Clubhouse
Calories: 590
What they say: Thick-cut Applewood smoked bacon, caramelized grilled onions, white cheddar, crisp leaf lettuce and fresh tomato top our grilled chicken breast fillet. Served on our artisan roll with our Big Mac special sauce.
What I say: This artisan roll is MUCH better than the bakery-style one. So points there. And you'd think that I would rate something with bacon, tomato, and not-fried chicken much worse than this, but I'm telling you, the grilled onions, and the addition of Big Mac special sauce made my entire day. You could probably put that special sauce as frosting on Mini-Wheats, and I would eat them. So... what say you, Kellogg's? COLLAB? 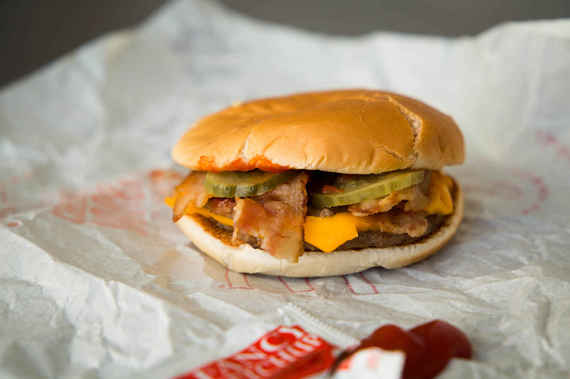 14. Bacon McDouble
Calories: 440
What they say: Two juicy 100% beef patties seasoned with a pinch of salt and pepper and topped with melty American cheese, thick cut Applewood smoked bacon, minced onions, tangy pickles, ketchup and mustard on a toasted bun.
What I say: INSERT EXPLANATION ABOUT THIS NOT NEEDING THE BACON, PLUS VERY HILARIOUS JOKE AND/OR SELF-REFLECTIVE OBSERVATION.

13. McRib
Calories: 500
What they say: The tasty fan favorite slathered in tangy barbecue sauce, slivered onions and tart pickles all on a hoagie style bun.
What I say: This reminds me of summer and getting barbecue sauce on the steering wheel of my old car from college, and not caring because I was so young and full of life and ignorant of tax laws. So who cares if it's actually a pork patty? DON'T RUIN THIS FOR ME. 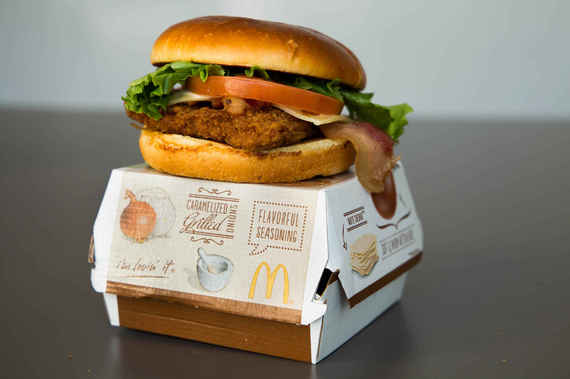 12. Premium Crispy Chicken Bacon Clubhouse
Calories: 750
What they say: A tender and juicy crispy chicken breast filet with thick-cut Applewood smoked bacon, caramelized grilled onions, white cheddar, crisp leaf lettuce and fresh tomato. Add our Big Mac special sauce and artisan roll for a premium taste experience.
What I say: This is how much farther frying the chicken gets you. Also, somewhat crazily, this is the most caloric of any of the sandwiches. Including the Double Quarter Pounder.

11. Bacon Clubhouse Burger
Calories: 720
What they say: Thick-cut Applewood smoked bacon, caramelized grilled onions, white cheddar, crisp leaf lettuce and fresh tomato, all lovingly layered on a quarter pound** of 100% pure beef, then topped with Big Mac special sauce. Served on our artisan roll.
What I say: And this is how much farther actually making it a burger gets you. Big Mac sauce should run for some kind of public office.

10. Hamburger
Calories: 240
What they say: A juicy 100% beef patty simply seasoned with a pinch of salt and pepper, tangy pickles, minced onions, ketchup and mustard.
What I say: My Dad always gets two hamburgers and nothing else when he goes to McDonald's, which is probably twice a year. And when I was young, and they still pre-made many of the burgers, I'd get annoyed because they'd never have hamburgers already made, because who really ever orders hamburgers? But he did, and they're delicious, despite lacking that crucial dairy element.

To see what snagged the #1 spot (plus all the others), head over to Thrillist.com!

More:
food rankingsBurgersfast foodbig macTaste
Newsletter Sign Up
The Morning Email
Wake up to the day's most important news.
Successfully Subscribed!
Realness delivered to your inbox