We're off to a roaring start. My wife Rivka is coming along on an 8-day/7-night cruise up the Alaska coast. Roaring in this case means we start the great royal hunt for her passport three months before departure.

After all, we don't want to reprise last year's drama of the Labrador trip when she forgot that her passport had expired and had to get an emergency rush new one at much extra cost days before we left. This time I ask her at the beginning of February, way before the May 15 due date, where her passport is. And she can't find it. 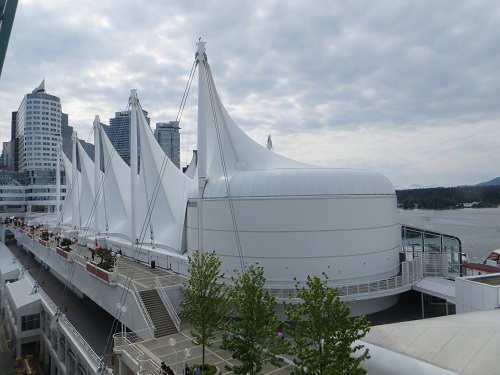 Vancouver's Canada Place from which many Alaska cruise ships leave

But Madam still gets the last laugh. Just when they announce boarding at JFK for the flight to Seattle, she has to go to the loo. When we finally board it's the usual chaos of passengers from everywhere but your seat taking up the bin space above your seat with their vast portmanteaux. 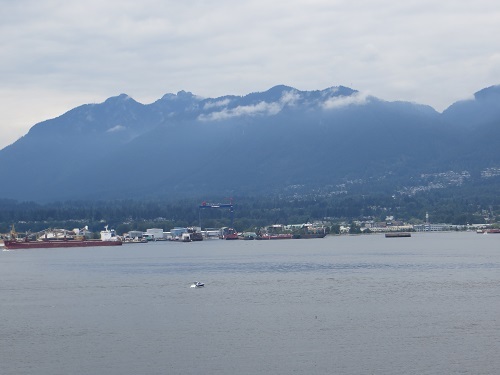 And it's not my fault the flight attendant has no sense of humour.

'Shaken, not stirred,' quoths I.

Well, she doesn't have to look so sour and almost spill the whole teapot over me. 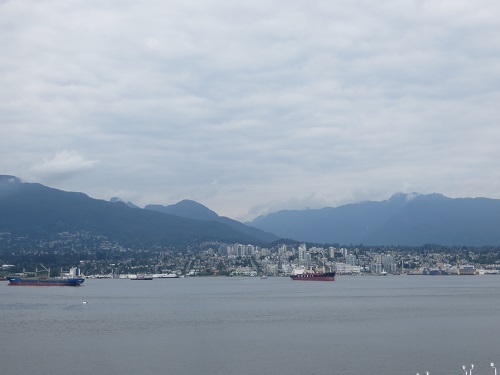 It is indeed Rivka's fault, though, on the connecting flight from Seattle to Vancouver, our port of departure. Why does she have to interpret the announcement 'will you please turn off your cell phones and all other electronic equipment' as a green light to take out her cell phone, dial and engage in a determined conversation.

Even as we speak the steward is remonstrating with her, on his knees, almost pleading. But Madam is not to be trifled with and winds up her call with lackadaisical tardiness. 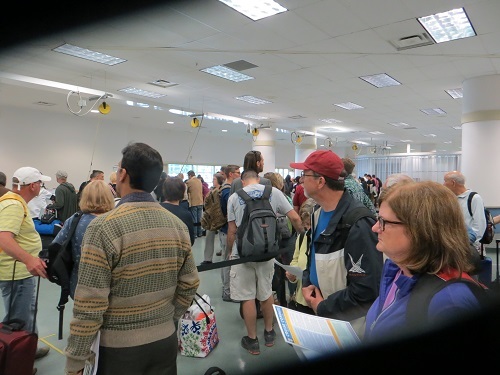 They're gradually moving us, some 2,000-strong, row by row round a corner where there's a long line moving at a snail's pace to check in. After about an hour a lady moves us to yet another row, still a long, long way away from boarding. Time for Yours Truly to do a Fletcher Christian. 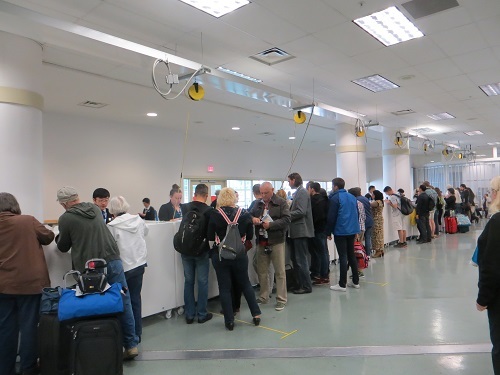 'How much longer is this going to take,' quoths I.

'Well,' quoths I, 'the least you could do is provide some tea, coffee and biscuits while we wait, especially as that video over there says Royal Caribbean welcomes you. What a welcome! That's something your leader should know and do.' 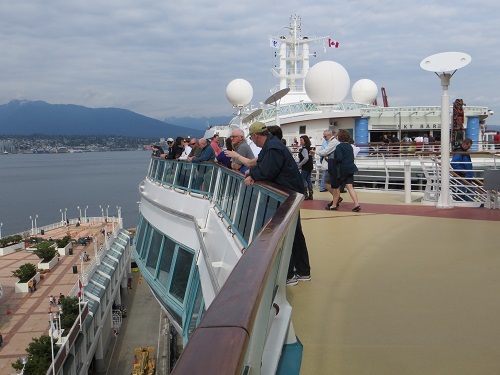 On board at last

I'm winning converts among the midshipmen. But an arsehole behind me - no, not my own - remonstrates that it's not fair to bawl out the poor lady as it's not her fault.

As the wait goes on even he says: 'Don't get me wrong, we're mainly on your side.'

But why doesn't Royal Caribbean make that initial introduction to the cruise more passenger-friendly? 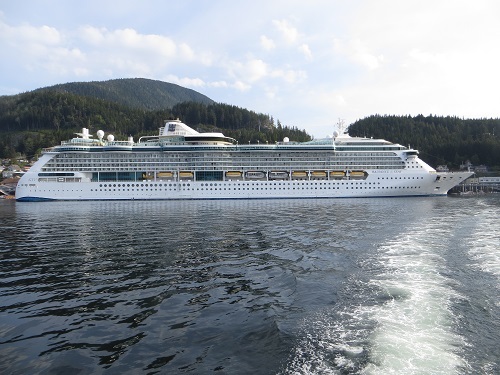 The Radiance of the Seas 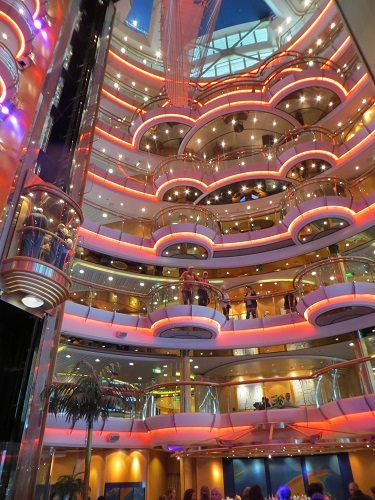 The atrium of the Radiance of the Seas

To cap off a glorious boarding experience, there's a free raffle for a $500 credit on board and I'm so riled up that I start signing up on the wrong sheet - for Dr. Ravi Sandhu's special Botox skin treatment. Oy Vey! 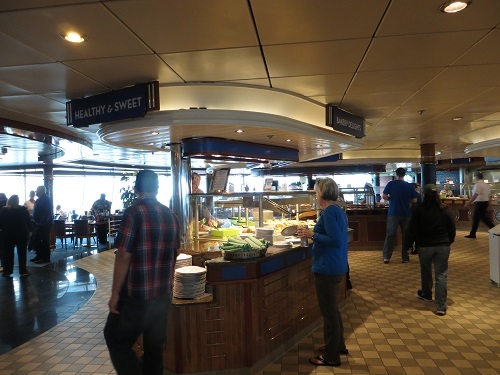 One of the many dining rooms

The Radiance of the Seas, though, is a very presentable vessel. The cabin's got a large window, it's clean, the food is good and there's plenty of it, and there are ample activities, although I don't see myself rock climbing on deck 13, even if I might try a little mini-golf aft on aforesaid deck, where a little blond six-year-old kid is preparing to become the next Tiger Woods. 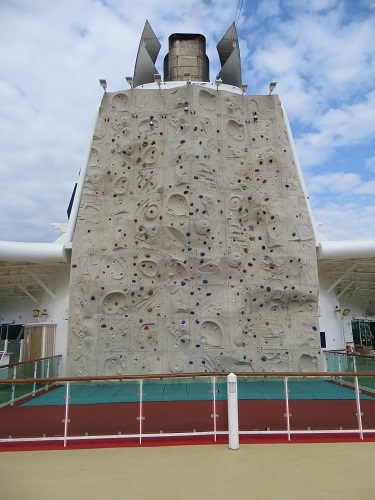 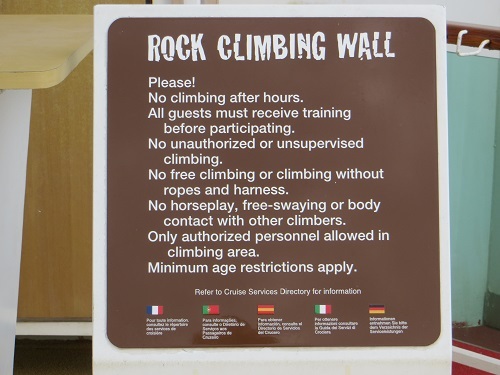 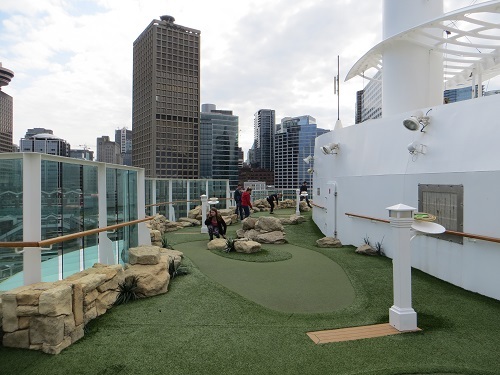 Mini-golf even before setting sail 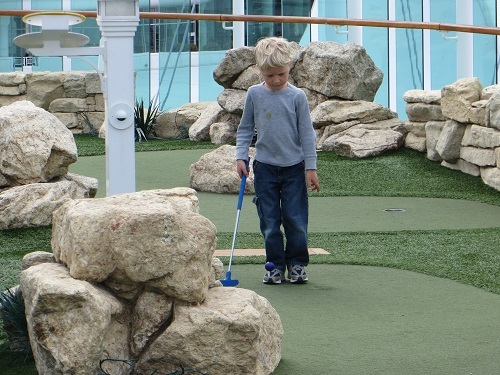 The next Tiger Woods

There's a huge central atrium stretching up the full 13 floors with lights that change colour depending on the time of day, and glass lifts soaring up and down the sides. 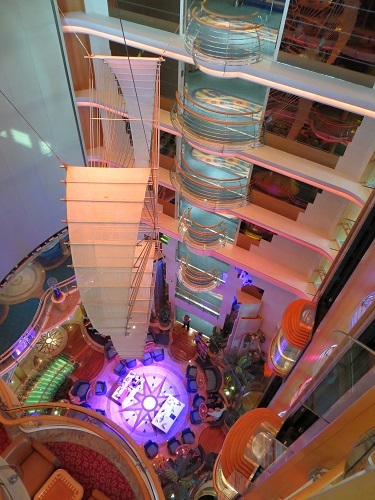 Looking down from on high

There's a casino, a cinema and shows in the Aurora Theater - the one we go to is absolutely terrible. 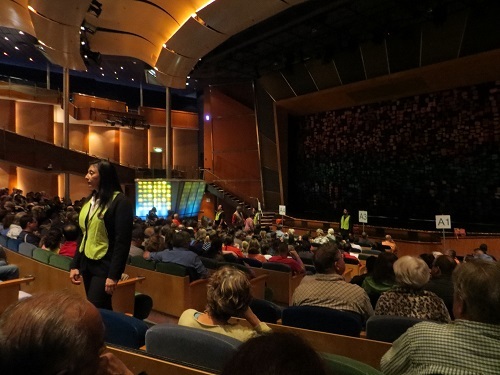 The shopping precincts on deck 5 looks like London's Oxford Street on a Saturday noon with geriatrics milling around looking at the same articles that cost half the price on land back home. I can even rent a tuxedo for $100 for the whole seven days of the cruise - they have two formal nights. Yeah, right! I'm full of tricks but that's not one of them. 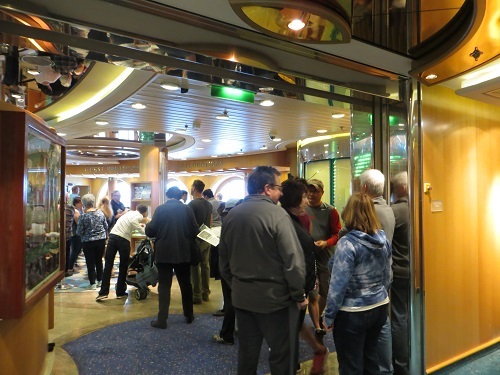 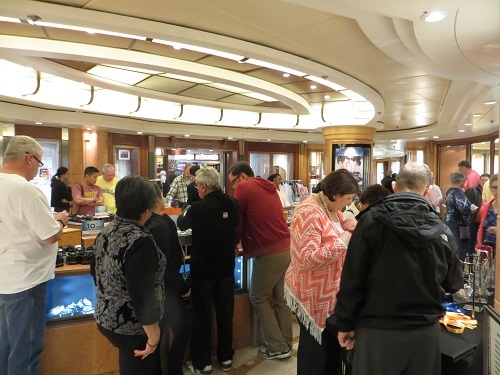 So it takes only a few nanoseconds for me to come to the startling conclusion that I'm not a cruise person - but the vast majority are lapping it up. 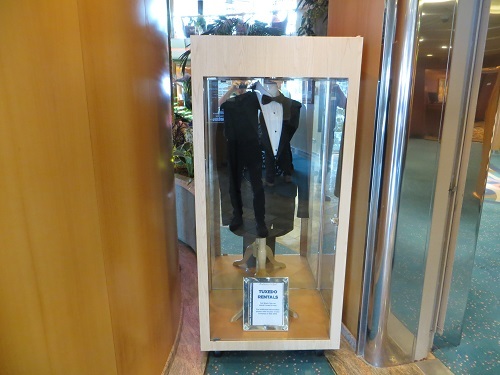 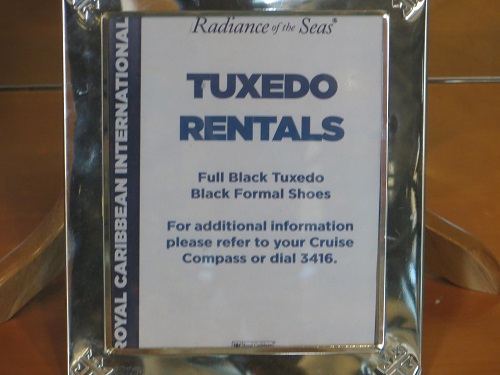 What we thought would be a slide show of Alaska's unparallelled natural beauty has turned into an unparallelled unnatural hard sell of the Excursion Queen's excursions. They're quantum-leap overpriced, from kayaking to float planes to helicopters. 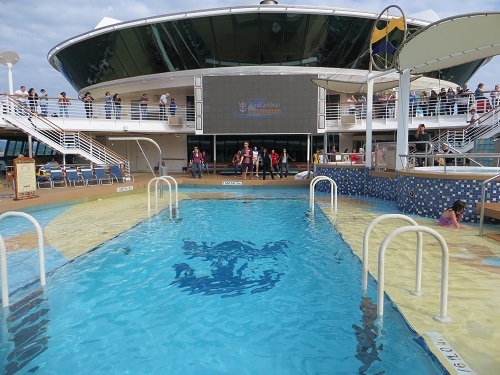 One of the swimming pools 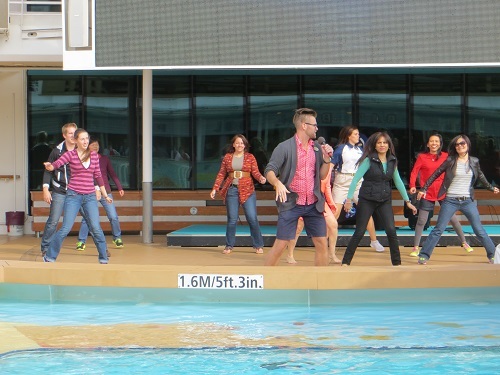 What's even worse, the measly slides she shows are all incredibly blurred. How the hell can an Excursion Queen show such frigging awful slides of one of the most photogenic regions on Earth? 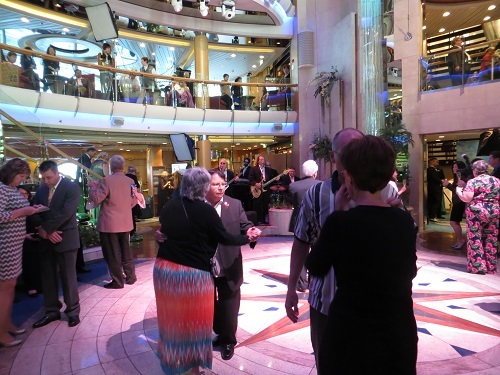 The other 2,000 cruise-fiends don't seem to find anything amiss. Both younger and older, first-timers and 'repeat offenders' - recidivist cruise delinquents who can't wait for the next cruise, and the next one after that - are all mightily pleased.

Don't get me wrong. It would be fun to say that among the 2,000 people aboard the Radiance of the Seas there are 2,000 ugly Americans. But nothing could be further from the truth. There are your usual loud-mouthed glaring, blaring idiots, but the vast majority, both American and foreign, seem very decent people. 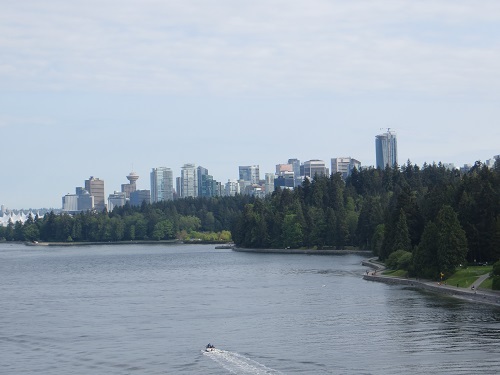 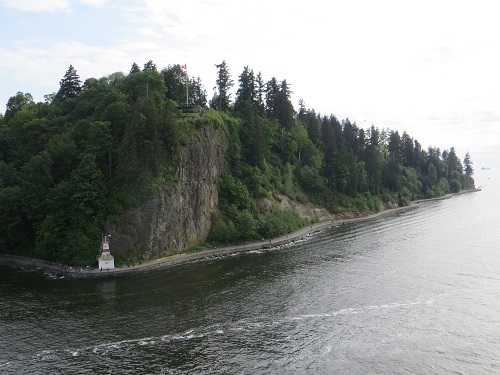 Moving out to sea

And oh Jeez, they're having a 'spot the fake' Excursion Queen competition at 6 p.m. Now where's my blond wig and mini-shorts? I don't know about my thighs, though. 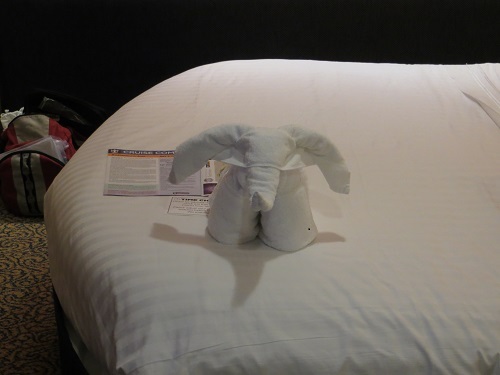 And the cabin boy's been playing with the towels 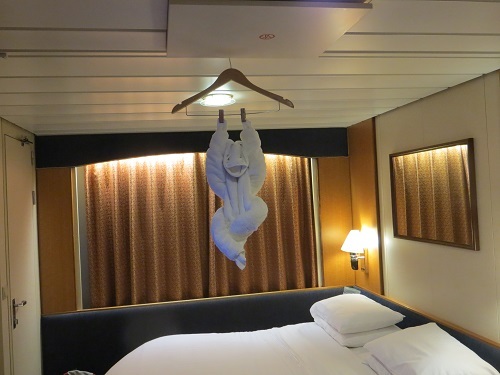