To say that director Cindy Kleine spins her search for truth into an art form only begins to describe the new film, Phyllis and Harold, documenting the bewildering marriage of her parents. While father Harold remains a dark and shadowy figure, mother Phyllis is eventually painstakingly and fully fleshed out. The deeper focus and graphic details, which reveal the subtle and sometimes secret aspects of her mother's life, could not be revealed until Harold passed away in 2003. And, I won't spoil the accruing dramatic suspense by being too specific here. Suffice it to say, its impact is powerful and poignant.

The feelings the film evokes remind one of a first reading of Betty Friedan's The Feminine Mystique in which essential aspects of one's own mother or grandmother were given credence and revealed as never before. Phyllis and Harold is the perfect companion piece to Friedan's seminal work on the quiet plight of suburban women in the 1940s and 50s, proving once again that life was anything but pure and simple way back when.

Like Friedan's book, Cindy Kleine's film has captured something quietly but essentially tragic about many American women who were born in the 1920s and 30s. While this film is a very individual and unique unfolding of Klein's mother Phyllis' deeply complicated, lifelong dilemma, it also strikes notes of universality many will recognize as they recall the lives of the women from the WWII generation in their own families. In choosing duty and loyalty over satisfaction and a greater sense of freedom, these women stayed home, remained trapped, and suffered in silence.

But a mother's deep unhappiness and yearning for something missing (or in Phyllis' case someone who is missing) -- even when veiled by middle-class props such as a killer wardrobe, a tastefully decorated home, a pool in the back yard, and trips abroad -- seldom go unnoticed by her own children. It's striking to hear Harold recall the story of their 59-year marriage and compare it with Phyllis' recollections and those of her two sensitive and observant daughters.

Phyllis' story is a heartbreaker, but so too is the effect it had on Cindy Kleine and her sister who are also interviewed. They worshipped their mother even though most of the time she was only half there. Kleine's extraordinary empathy and insight into her mother as well as her early exposure to photography which developed her visual sensibilities thanks to her father are the some of the elements that make this film so effective and ring so true. Ironically, the film -- unlike Phyllis' real life -- allows her ultimately to be revealed a whole human being.

Actress Jean Simmons: Leading Lady in Her Final Film
Born nine years after Phyllis, the actress Jean Simmons shares some things in common with her. Simmons' career flourished through almost three decades before it began to wane in the late 1960s. Her second husband, film director Richard Brooks, sensed this frustration as well as problems with alcohol use and the effects of the increasing invisibility of middle age and an unhappy marriage. He created the film The Happy Ending especially for her. Released in an important and transitional year in Hollywood--1969--it was far from a perfect movie, but Jean Simmons made the most of a role that paralleled her life so closely and was nominated--a second time--for an Academy Award. It's another film that tries to make sense of Friedan's feminine mystique--that awful, nagging sense that something in life is missing. 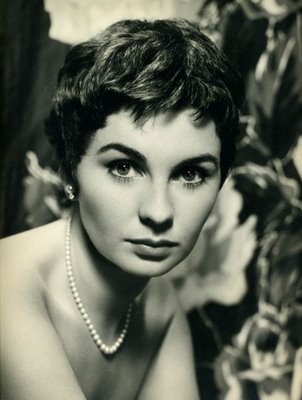 Simmons always made wildly interesting if not important movies -- whether theatrically released or for television -- in almost every decade following her film debut in 1944 at the age of 15. 1940s: Great Expectations, Hamlet; 1950s: Young Bess, The Actress, Until They Sail; 1960s: Elmer Gantry, Spartacus ;1970s: Mr. Sycamore, Dominique, The Eastern Promise; 1980s: December Flowers, The Thornbirds, (television remake) Great Expectations; 1990s: How to Make an American Quilt.

She was luminous in black and white as well as Technicolor and shined brightly in quirky, contemporary dramas (Mister Buddwing, 1966) as well as in lavish, period pieces (The Robe, 1953). She even bridged the gap to musicals starring with Marlon Brando and Frank Sinatra in Guys and Dolls (1955) and unlike her contemporaries Audrey Hepburn, Deborah Kerr, and Natalie Wood her singing voice was not dubbed by Marnie Nixon.

Her very last film Shadows in the Sun was released in 2009 but, unfortunately, thus far only in Great Britain. Whether it will come to the U.S. via the festival circuit or be distributed theatrically is unclear. While we may have to settle for seeing it on DVD, Jean Simmons last performance on film coinciding closely with the time of her death is an event to look forward to. The richly talented and lovely, raven-haired actress endured inevitable comparisons with other iconic actresses such as Vivien Leigh, Audrey Hepburn, and Elizabeth Taylor carving out her own unique place in Hollywood, survived the lean, turbulent, and radically changing years of the late 1960s through the 70s, and ultimately, emerged once again as the leading lady in her final, 2009 film in which she plays the surprising matriarch of a family named Hannah.