The Texas-Mexico border confounds politicians and overwhelms sociologists. Population growth and a merging of cultures and economies do not make for simple solutions to problems. In Texas, the border is often an afterthought for policy-makers in Austin, which means funding and legislation to drive equality of government services historically lags in delivering benefits that are afforded the rest of the state.

Resources deployed to the Texas-Mexico border have often been provided with the expressed purpose of stopping illegal immigration into the U.S., and confronting drug cartels. Social services for residents, especially health care, tend to get secondary treatment. In fact, Texas Governor Greg Abbott expects to fund 500 new Department of Public Safety troopers to increase security on the Rio Grande and elsewhere in the state even as other, arguably, more essential border challenges go ignored.

The federal government cannot exactly be accused of largesse, either, with regards to the border. Critical needs are often dramatically underfunded by Washington, which can lead to compounding crises.

"Of the 141, veterans' hospitals in the U.S., we rank 141 for access to mental health care here in El Paso," said Congressman "Beto" O'Rourke of El Paso. "There are always dangers that troubled vets might do harm to themselves and their families, and we need to provide treatment, right away. We are coming up with a plan for turning around access to health care for veterans in El Paso, especially mental health care, and I believe El Paso can serve as a model for the V.A. nationally." 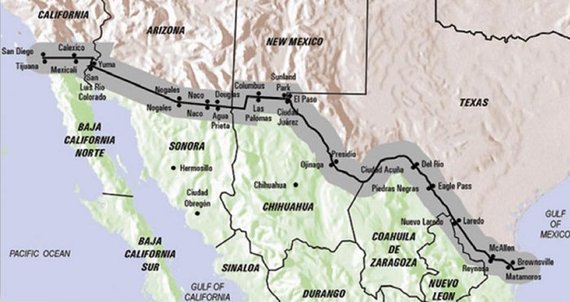 O'Rourke was speaking at the recent 10th annual gathering of the Border Health Conference sponsored by the Border Health Caucus (BHC) on the campus of the University of Texas at El Paso. The BHC is sponsored by the Texas Medical Association (TMA.) TMA physicians and member groups created the organization in an attempt to raise awareness of critical health care issues along the Texas-Mexico border, and provide leadership for positive change. This is the second time the conference has been held on the border instead of in Washington, D.C. The BHC consistently gets bi-partisan support and this year's attendees included, in addition to Congressman O'Rourke, a Democrat, fellow Democratic Congressman Filemon Vela of Brownsville, and Republicans Will Hurt of Helotes and Dr. Michael Burgess from North Texas.

Health care has grown infinitely more challenging as the border region's population has doubled to around six million people over the last 20 years, according to the latest U.S. Census figures.

"We have to continue to lead the search for solutions to these problems," Dr. Tom Garcia, president of the TMA told the caucus attendees. "We know the border has more poverty and a much less robust health infrastructure than the rest of Texas, and the rest of the country. And we are here to take care of people, not garner votes."

And there is an abundance of people that need care, not just military veterans. Texas is estimated to have about 2300 colonias along the border, which are unincorporated communities that often lack running water, sewers and electricity. The state legislature has not comprehensively dealt with colonia issues even though unscrupulous developers first created them back in the 1950s for migrant workers. The state's "highest health risk" remains among 45,000 people living in 350 colonias, which means being a physician or caregiver along the Texas-Mexico border is both a health care and political challenge.

The Texas legislature, after decades of political wrangling, finally funded a university and medical school in the Rio Grande Valley of South Texas, which will begin to have an impact on border health, including a first class in 2016 that will focus on health issues related to colonias.

The discussions in Washington are often more frustrating for physicians and the TMA.

"We spend a lot of time educating congressmen and women and their staff about unique health care issues we face each day in our practices," said Linda Villareal, MD, an Edinburg, Texas internist and TMA trustee. "We were not shy about expressing our opinion [to elected officeholders] that politics as usual during this trying time is not acceptable, nor is it acceptable for Congress to use physicians and our patients as a political football between the House and Senate."

The border suffers along with the rest of Texas for a failure by the state to adopt Medicaid expansion under the Affordable Care Act (ACA.) An estimated $22 billion of federal tax money will end up in other states instead of being used to deliver health care in Texas through 2022. Sign-ups for Medicaid in California increased 35 percent under the ACA, 28 percent in Arizona, and 53 percent in New Mexico through expanded eligibility and increased federal funding. In Texas, however, which has refused the coverage, Medicaid and Children's Health Insurance Program sign-ups rose only 4 percent. The state legislature and the governor refused Medicaid expansion even though the health department estimates one out of every four Texas residents lacks health care coverage.

Unfortunately for the border, problems persist, in part, because politicians in Washington and Austin appear more worried about walls and guns and security instead of medicine and care giving. While veterans living on the border wait almost interminably for access to a hospital or a doctor, 41,500 positions inside of the VA remain unfilled, and construction of a vets' hospital in Denver runs $1 billion over budget.

There is likely a better way to do things. But someone still needs to find it. And soon.