If you have lost your faith in humanity and the goodness of people, read this story. It happened to me and my family today, and I'm still shaking my head in awe.

Today, my wife and my 3-and-a-half-year-old daughter were headed up to a lake in New Hampshire -- somewhere in the middle of the state. We chose a route to avoid traffic, and found ourselves cruising along the highway sometime around 2 p.m. about 70 miles from home. All of a sudden, I noticed white smoke blanketing the highway behind us. I assumed it was another car, but my wife quickly pointed out that it was coming from our car. I had no idea what was going on, but it was clear that we needed to pull over right away.

I quickly turned on the hazard lights, and headed into the breakdown lane. The traffic was whizzing by us, and I knew it wasn't safe to get out on the highway. After a quick discussion, we decided to try to make it to the next exit about a mile up the highway.

We made it to the next exit, and we didn't see much more white smoke coming from the car. However, as we got off the highway, there was traffic on Route 125. Sitting in traffic, all of a sudden white smoke starting pouring out of the back of the car again. And then the car stopped responding as I stepped on the gas pedal. Each time I stepped on the gas, the car barely responded. Inexplicable, the car lurched forward several times. I knew we were in serious trouble.

We made it another half mile down the road where we saw a bunch of car dealerships and a Monro Muffler. At the next intersection, I tried to turn left into the Monro, but the car wouldn't move forward. We were stuck in the middle of a busy intersection. So I put the car in park, and then back into drive several times, and somehow I was able to get just enough momentum to get into the parking lot. As soon as I could, I got out of the car and saw that transmission fluid was gushing out of the engine. It was immediately clear that the car needed major service. We weren't going anywhere.

Question: What's worse than breaking down in the middle of nowhere?

Answer: Breaking down in the middle of nowhere on Labor Day weekend.

As I got out of the car at Monro Muffler, I noticed a man standing in front of the building. It turns out he was waiting for his car to get out of the shop. He saw my dilemma and we started chatting. He got down under the car with me, and we both saw that my car was in serious need of repair. I went into the Monro shop, and the man behind the counter made it very clear that there was no way he could look at the car any time soon. We were stuck.

I was clear that we were going to need a rental car, so I immediately started looking for a solution. We were in luck! There was a Hertz rental car next door! But it was closed. So I used my phone to find several places nearby, but they were all closed. The man who was standing outside Monro also called a few places, but every place was closed (he found one place 30 miles away that was open -- but we wouldn't be able to get there before they closed).

After some more discussion, the man told me that he lived nearby, and he gave me his phone number in case I needed help. As he left he reiterated: "Listen: if you can't find a solution, you could always borrow my car. I don't need it this weekend because I'll be driving my truck." I thanked him and told him that I appreciated his offer. I thought we would find a solution.

Fast forward 45 minutes: I called every rental car place in the area and couldn't find a car. I also called every U-Haul, Penske, and Home Depot to see if we could find a vehicle. But this was Labor Day weekend, and every car, truck, and van were rented. I considered trying to get a cab to the closest airport (45 minutes away). Heck, I even considered buying a car at one of the places across the street -- but they were closed too.

I looked at my family sitting there idly on the grass next to Monro, and I made a decision. I believe in the goodness of people, paying it forward, and karma. The universe was telling me something.

I called George on his cell phone and said, "George, I don't know if you're my guardian angel or just an amazing person, but we're completely stranded. I'll take you up on your offer." Five minutes later, George showed back up at the Monro service center. I jumped in the car with this stranger, and we drove back to his house a mile down the road. At my insistence, we exchanged basic contact information, and he handed me the keys to his Toyota Corolla. 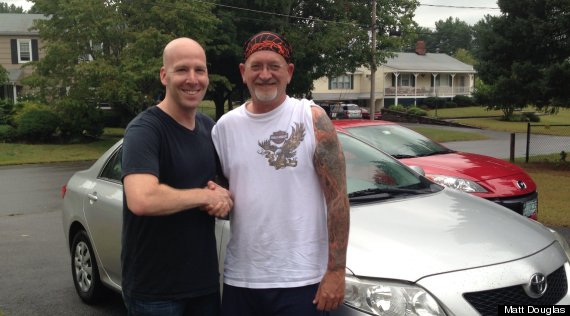 George didn't need a contract, and we didn't discuss the risk. He trusts me implicitly, and I think he knows that I'll do the right thing. We have a old-school gentlemen's agreement: a firm handshake and a promise. It's the time-honored way of making a contract. And it felt great.

With tears in my eyes, I pulled away from this wonderful man's house. I'll never forget the way I felt -- thankful for the goodness of people, the kindness of strangers, the amazing story I'll recount for years.

I'm now sitting 80 miles north of where we broke down. A few minutes ago, George and I exchanged text messages and he simply told me to enjoy myself. George's car is in the driveway and the rain is falling steadily in the darkness. In the next room over, I hear my family playing safe and sound, sheltered from the darkness and the rain. All because a complete stranger made the choice to help a young family in need. All because someone trusted a random person who desperately needed assistance.

All because of George.

Learn more about how Redditors are helping George here.