Sales results won't be known for a while, but McDonald's introduction of all-day breakfast has boosted consumer perception of its brand, according to data from YouGov BrandIndex. Among frequent breakfast eaters, the bounce has been even higher.

McDonald's overall perception score has lagged its competitors for more than a year in YouGov's research. But as the Oct. 6 breakfast launch neared, McDonald's perception began to swing positive and topped the category beginning Sept. 24.

YouGov BrandIndex interviewed 22,000 adults (18+) since Jan. 1, 2015, including 7,000 breakfast eaters. The researcher compiles a Buzz score based on asking respondents, "If you've heard anything about the brand in the last two weeks, through advertising, news or word of mouth, was it positive or negative?" The question used for determining the general impression of a brand is: "Do you have a general positive feeling about the brand?" 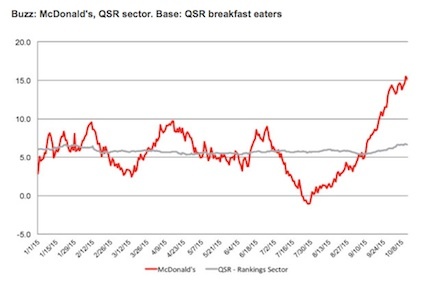 The research does suggest that McDonald's sales will be positively affected by the availability of all-day breakfast. After the launch, 46% of frequent breakfast eaters said they would consider McDonald's the next time they purchase fast food, compared with 39% in August. The average Purchase Consideration score for quick-service restaurants is 15%.