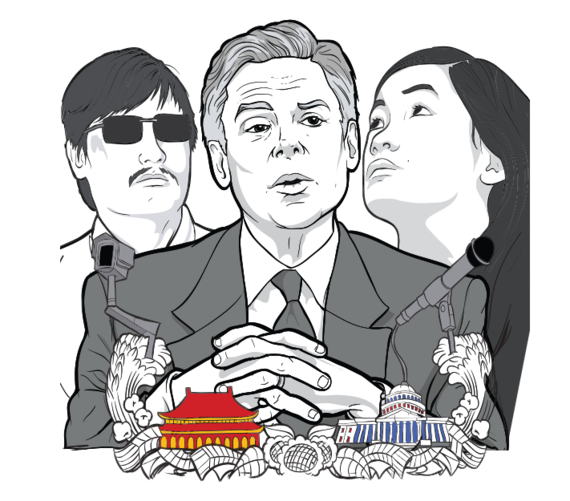 The documentary "All Eyes and Ears" is a timely exploration into the complex links between the U.S. and China. It uses the stories of then-U.S. Ambassador to China Jon Huntsman, his adopted daughter born in China, Gracie Mei, who narrates the film, and blind civil rights advocate Chen Guangcheng for what director Vanessa Hope calls "the yin and the yang of American relations with China." The film is now available streaming on most platforms, including Amazon and iTunes.

President-Elect Donald Trump was outspoken during the campaign on his commitment to renegotiate our trade agreements with China. His phone call with Taiwanese President Tsai Ing-wen following the election rattled the diplomatic community and provoked a strong rebuke from China. Now the possibility that Jon Huntsman is being considered for a position in the Trump administration makes this film of special interest. Huntsman has spoken out in support of President-Elect Trump's call with Taiwan.

Our relationship with China is a complicated one, involving geopolitics, trade, outsourcing and the $1.157 trillion in United States IOUs China holds as the owner of 30 percent of our national debt. Each element of that relationship challenges and sometimes impedes our ability to negotiate on the others.

Hope's documentary feature debut evokes the personal and the international with its accent on diplomacy, activism, and individual experience. The film follows Huntsman and his family during his tenure as ambassador and traces Chen Guangcheng's journey from house arrest to asylum at the U.S. Embassy, and his thoughts on China's ambitions as an emergent world power.

This exclusive clip raises the issue of the fragility of a relationship where one country is producing and the other is consuming and corporations have more bargaining power than governments. China's low-paid workers produce goods that they cannot afford to buy for US consumers whose manufacturing jobs -- and the ability to pay for consumer goods with the wages from those jobs -- are disappearing.