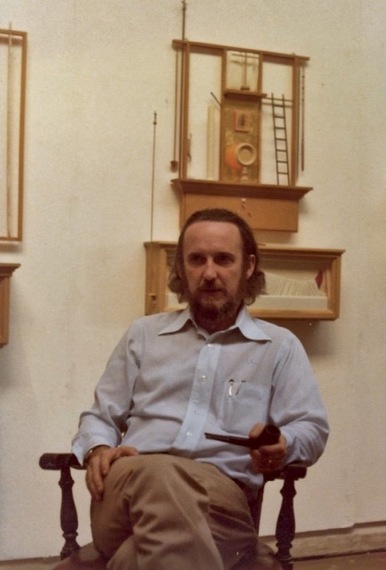 There are in the lives of artists seminal figures that inspire you to be more than you were before you met them. For me that person was Richard Long, an artist and very unique professor. Richard poured everything he had into his family, his art, and his teaching profession, and though blessed with two wonderful daughters and a devoted wife, I fear life did not return to him its just rewards for his sustained professional passions.

At the University of Wisconsin-Madison Richard was my drawing professor from 1975 until graduation in 1977. Here Richard held court, for his classes were not instructional life drawing sessions, but long critiques of our works, where their aesthetic value was shredded and reassembled, our relationship to civilization and the art world explored, and life's lessons delivered through an infinite number of amusing tales and pointed anecdotes. One classmate, Ellen Garvens, relates, "I might not care about how fishing is the only real sport, or how interpersonal events in Stoughton are important metaphors, or understand his reverence for the Catholic church but whatever he said he said with humor, panache, and originality." The class sat in a half circle facing our drawings, and Richard would sit before us, sucking on his pipe, looking over the works. He'd jump up, point out something in a drawing that grabbed his attention, ask the student about it, sit back down, and begin to expand upon the idea.

Each crit was a performance for Richard. He would rev himself up before entering the classroom, like a great Shakespearean actor who needs to clear the mind of all but his art. The artist Robert Shultz remembers, "During one of Richard's famous Friday morning graduate critiques he ripped my drawing up one side and then the other, proceeding to use it for comic relief for the next 10 minutes. Afterwards I was sitting in my studio angry, humiliated and embarrassed when Richard showed up and apologized to me, telling me he had gone too far and that he was sorry. I thought that said so much about him as a person, mentor and teacher." 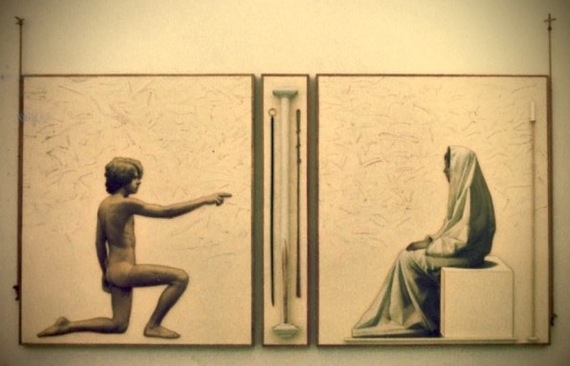 Richard told me that he liked to choose one student in each class, one of tough psychological mettle, to 'bounce' off of. He'd banter with that kid and pull other students into the conversation as it developed. Richard's wit was quick, sometimes wicked, but never vicious. He made you want to be witty too, and when you got a rise out of him it seemed a worthy accomplishment. A friendly competition developed, where you really wanted to make the best drawing for that week's crit. You wanted Richard to go up to your piece first, look it over as he pulled on his pipe. Then, taking the stem out of his mouth, he'd turn to you with a wry smile, "You outdid yourself this time, Hess!" 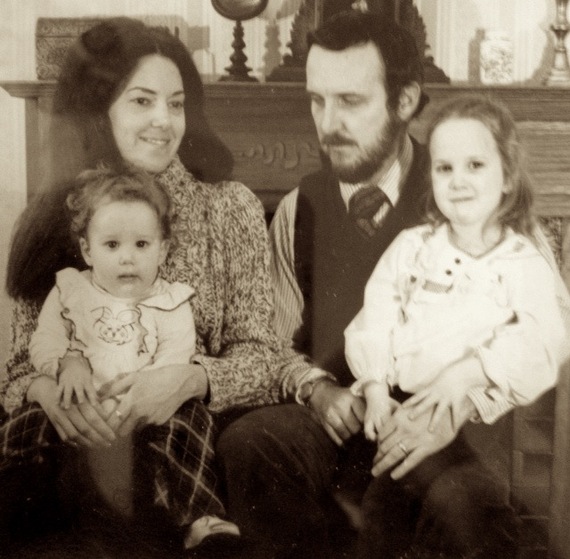 Alice and Richard Long, with daughters Cecily and Elizabeth, 1976.

By coincidence the Long family lived a block from the house my parents moved to after I left for college. Stoughton, a rural community a half hour from the UW had a number of professors living there. The first I heard of Richard Long was when he served as judge for our high school art contest. I won first and third place. When I transferred to the UW in 75', Richard helped me get into more advanced classes than a junior deserved. This began a years long friendship, where I saw Richard's daughters grow up, exchanged art conversations, and watched my former professor morph from an Anglican to a Catholic, and from a liberal to a staunch conservative. This latter transformation shocked a number of us who hoped it was more of Richard's theatrics, but it was in dead earnest, and through the intolerance of his administration it led to his downfall.

Richard's eccentric character and conservative political views left him increasingly isolated in an art department that grew ever more conceptual and a university that was ever more politically correct. Richard related what he'd told one student, who'd brought their weekly journal to class in lieu of a drawing. "This may be interesting, this may be true, it may even be riveting, but it isn't art." Richard maintained his following amongst those students who made representational drawings, but he was a polarizing figure for many others. Goaded daily by cocky MFA students, Richard quipped to an agitating group of them in the hall one day, "Heil, Comrades!" He felt that the mix of fascism and communism inherent in his expression perfectly captured the tenor of their activities. 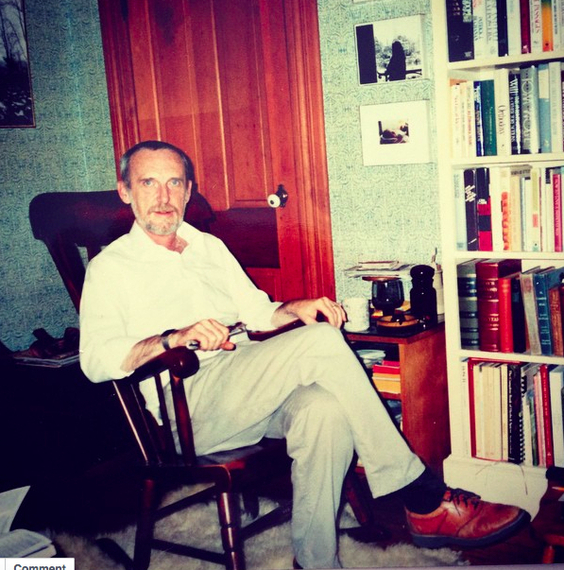 Those two heedlessly delivered words destroyed Richard Long's academic advancement. He was tenured, thus not easily fired, but the ensuing years trapped him in an investigation involving lawyers, administrators, and tribunals. Donald Downs describes this Kafkaesque extravaganza in his 2004 book, "Restoring Free Speech and Liberty on Campus." Though he taught for another twenty years, Richard never received further merit raises, remained the odd man out in departmental affairs, and never saw any of the perks enjoyed by younger peers. Through the bitterness of those years, Richard persevered... and he taught. 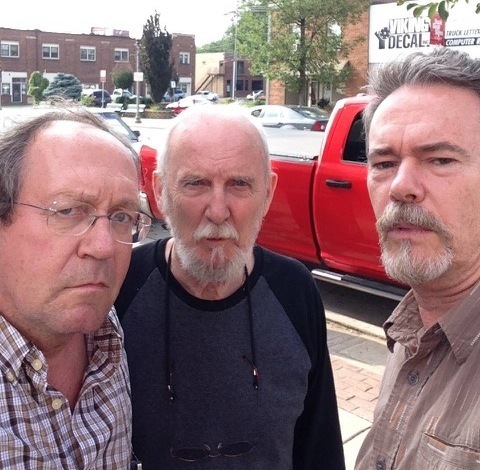 "Richard helped his students develop their own direction", says Linda Emmerman-Kornick. "Individualism was respected and honored. I think the work I do today is still a part of a life-long stream of consciousness that first began in his class, where one assignment flowed forward into the next." The artist Bill Amundson, who lives in Stoughton, is one of Richard's few regular companions these days. "Being a student of Richard's set one apart from the run of the mill do-it-as-you-feel-it art students of the 70's. He expected us to have a working knowledge of art, history, politics, religion and the self, in addition to consummate drawing skills. He made us write grammatically correct papers! Richard held his students to a very high standard, a standard we felt honored to aspire to and occasionally achieve."

We benefactors of this unusual teacher have spread out across the globe. A number of us lined up exhibitions for Richard, knowing that he had a warehouse of art works stored away, but he never responded to gallery requests. The ambition to be recognized as the unique artist he was simply wasn't in him. Richard retired from teaching in 2008, and was diagnosed with Alzheimer's disease in 2009. "The problem," he told me two years ago, "is that once you are diagnosed, everything you have ever done, in retrospect, is seen as crazy." Years before the diagnosis Stoughton's population already saw Richard as one of those odd local characters, his intense blue eyes unnerving those he energetically spoke to, his wit soaring way above their heads. Little did the inhabitants of my hometown know they were in the presence of a great intellect, a superb educator, and a prolific artist whose wit and wisdom influenced generations. 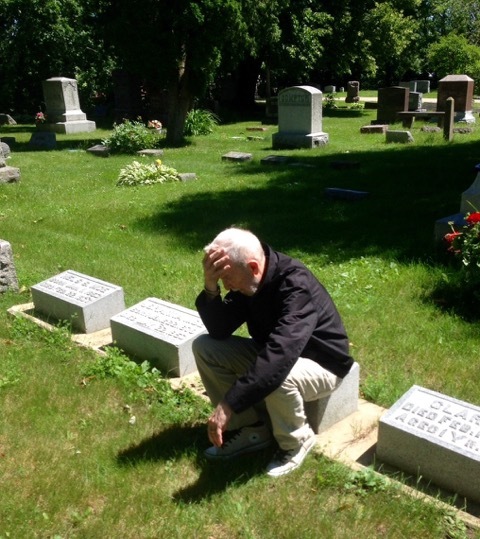