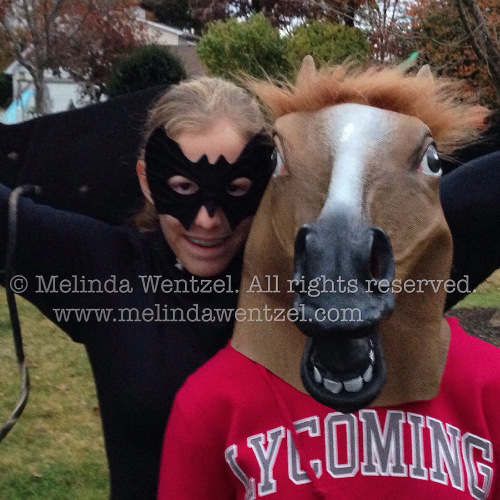 I've been informed it's over -- my brood's love affair with trick-or-treating, that is. I knew it would happen eventually. I just wasn't expecting it to happen now, seemingly minutes before Halloween. It's possible I'll need weeks of therapy in order to cope with such tragic news. Please send candy.

I guess I was kidding myself to think my kids' enthusiasm for harvesting gobs of chocolate and fistfuls of candy corn would last forever. And I probably missed some important signs last October when my progenies disguised themselves to the nth degree (one wore a disturbingly realistic horsehead mask while the other donned a ginormous set of bat wings), but then sort of dragged their feet when it came to traipsing all over the neighborhood, treat bags in hand. At the time, I simply pushed it out of my mind. Denial, as it were.

As the stages of grief are classically defined, I suppose I haven't progressed much since then. I still reject the idea that the fun is over, defending the fact that "...even adults like to dress up in ridiculous outfits and solicit candy. Who wouldn't?"

Almost immediately, I learned how incredibly stupid that question was. In no uncertain terms, I was enlightened as to how "completely done with that" they were.

"We just want to stay home, answer the door and scare little kids to DEATH."

Egads. I wasn't prepared for that sort of response. I guess I just want to hold on to the past, or maybe even live it a little longer if possible. I liked it when my twin daughters were just babies--most of the time anyway. They were pumpkins their first Halloween, kittens their second, and burly lumberjacks their third year I think. I remember dotting their cheeks with dark eyeliner, giving their faces the suggestion of stubble. I also fondly recall piling warm layers of clothing beneath red and black-checkered jackets to complete the look. 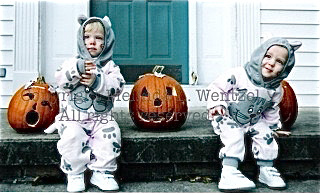 For the first several years, my husband and I lugged them around the neighborhood in their red wagon, using blankets and coats to prop them up and cushion the bumpy ride. Hats and mittens were a must, cleverly incorporated into the ensemble. At each house we visited, friends would crowd around the door to see how adorable our children looked, each year's costume topping the last.

As they grew older they were able to walk with us, tightly gripping one of our hands while clutching their coveted treat bag with the other. Each year we journeyed further and further away from home, eventually canvassing the entire neighborhood in one night -- which was no small feat.

More recently, they've met up with their friends on All Hallows Eve, eager to wander the streets of our close-knit community, a smallish herd of mask-toting teens and tweens in the dark of night, some carrying flashlights, some entirely too cool to carry a flashlight, their raucous laughter filling the autumn air. By evening's end, they would return home, sweaty and utterly spent, usually hauling all or part of their costumes -- either because they were too hot or they broke somewhere along the way. Treat bags bursting with candy. Smiles all around.

But this year will be different. No more ambling from house to house. No more bags of loot to dump on the kitchen floor to better sort and ogle. No more little red wagon or mittens. At least my kids have assured me there will still be the wearing of costumes, however. So there's that. I guess I'll just have to accept reality and embrace a new and different Halloween tradition-- scary as that might be.

Planet Mom: It's where I live lamenting the end of All Hallows Eve (sort of). Visit me there at www.melindawentzel.com and www.facebook.com/NotesfromPlanetMom.

More:
growing painsParenting Halloween ChildrenParents
Newsletter Sign Up
Raise the kind of person you'd like to know
Subscribe to our parenting newsletter.
Successfully Subscribed!
Realness delivered to your inbox