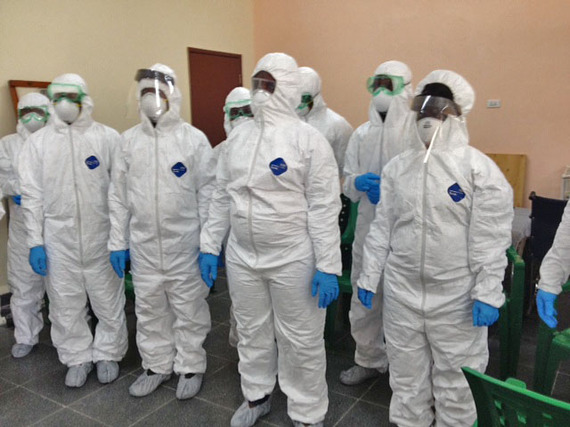 Since the Ebola outbreak began in March, all hell has broken loose here in Liberia.

One of our hospitals, St. Joseph's Catholic Hospital, was hit very hard. We lost six staff members to Ebola. It remains closed while thousands of mothers and children are at risk of dying from preventable illnesses such as malaria and diarrhea.

All around the country, clinics are closed because they lack the necessary and life-saving equipment needed to treat Ebola patients. It's not hard to understand that if healthcare workers cannot be protected from this deadly disease, they won't go to work.

But, if 37 years living in Liberia has taught me anything, it's that Liberians are resilient.

During the war times, virtually everyone had to rebuild their lives from scratch -- over and over again. Millions of people were displaced. Family farms were destroyed. The violence decimated the health infrastructure, and government services were non-existent.

The Catholic Church became a symbol of hope for Liberians of all faiths and backgrounds. We provided food and shelter to displaced people who had lost everything.

After the war ended, we worked with the people so they could, once again, begin rebuilding their lives.

But the fear of Ebola threatens to undermine our efforts over the last decade.

During the war, you could at least hear the bullets, and you knew when to duck. Ebola is different. It's a silent killer that can spread without people even knowing.

When the virus first appeared in Liberia, most thought it was a hoax. When they were told, "don't leave, stay in your area and report anyone that is sick, " they did the opposite. The situation quickly became chaotic.

Schools are now closed. Some stores are open, but their shelves are often empty as people are buying up everything. Imports from other countries are decreasing every day, and many people are worried that we will soon be faced with a food shortage.

Earlier this year we started education on Ebola prevention, and bought as many supplies as we could to keep clinics well stocked with necessary medical supplies. However, these supplies are running out, and more resources will be necessary to save lives and contain the spread of Ebola.

What's important right now is for people to know and understand all the facts about Ebola so they can protect themselves and help contain the virus. In the absence of a vaccine or a cure, the only way to stop this outbreak is through education that reaches people in rural communities where information is scarce.

Although Liberia has been peaceful for nearly a decade, right now, it feels like wartime again. People are afraid and uncertain about the future.

The international community -- and the Catholic Church in the United States in particular -- has come together to lend solidarity in times of dire need. On going assistance from Catholic Relief Services has supported our work, and donations from thousands of grassroots supporters has allowed us to re-open some of our clinics.

There is hope, and this is what Liberians need to overcome challenges that seem insurmountable.

Sister Barbara Brillant is an American missionary who has lived in Liberia for more than 35 years.