The Paris Agreement on climate change includes new climate commitments from all major countries and a system to track country-level progress towards these targets. One-hundred and eighty-seven countries responsible for around 97 percent of the world's climate pollution announced specific national emissions reduction plans for climate action after 2020 as a part of this effort. When countries formally join this agreement, starting as early as next April, they will include these emission reduction commitments in the Paris Agreement.

What national emission reduction actions did countries commit to implement?

Countries responsible for more than 80 percent of global greenhouse gas emissions made specific commitments to reduce their emissions by 2020 as a part of the Copenhagen and Cancun agreements. The Paris Agreement includes commitments that go beyond 2020. These commitments reflect a greater level of ambition than in the previous commitments. Before and during the Paris climate summit 187 countries responsible for more than 97 percent of the world's climate pollution have announced specific reduction plans (see Figure). As part of the Paris Agreement, countries will formally enshrine their climate action plans in the coming months once they formally join the agreement. 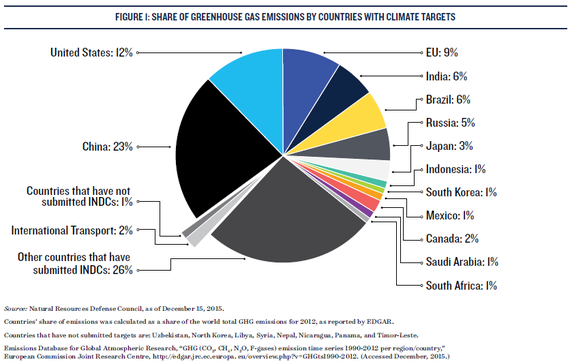 These include national climate reduction targets from all the major emitters including (see here for a complete summary):

The agreement will strengthen future action by a regular process for countries to upgrade their targets since the best estimates show that these targets don't yet put us on the necessary safe climate trajectory. The agreement sets out mechanisms to ensure that these targets are the floor by creating a dynamic process for countries to adopt more aggressive commitments starting in 2020. Starting in 2018 countries will look collectively at where the current targets take us and then in 2020 there will be a political moment where countries will have an opportunity to strengthen their 2030 targets.

The Paris conference also adds to the growing groundswell of climate actions in an effort to broaden the engagement of other leaders. Governors, mayors, corporations, civil society, financial institutions, and leaders of all stripes pledged individual and collective actions that can help address climate change now.

I'm confident that countries will find it possible to strengthen their targets as they will have found that they underestimated their ability to drive a low-carbon economy that benefits their people. Further clean energy cost reductions, confidence that policies are producing larger than expected emissions reductions, and other factors will inevitably prove to leaders that they can do more before 2030 than they are prepared to detail in 2015.