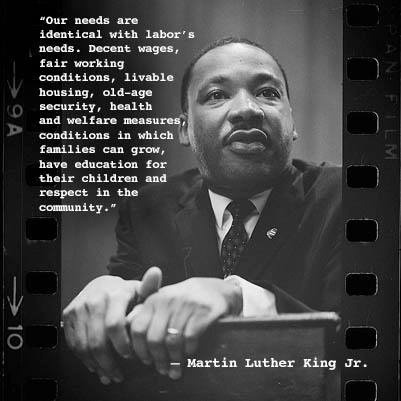 A few weeks ago, I saw Selma, a remarkable movie about the unbreakable persistence and moral leadership of Dr. Martin Luther King, Jr. in the struggle to secure voting rights for African-Americans in the Jim Crow South.

But what the movie didn't reveal was the role played by the labor movement in the 1965 march from Selma to Montgomery and its part in propelling the civil rights movement forward at so many pivotal moments. As we mark Dr. King's 86th birthday, it is my hope that Americans will remember another less-celebrated element of his dream -- a belief in the importance of unions, labor rights and robust worker voice.

As the U.S. Secretary of Labor, and also the former Assistant Attorney General for Civil Rights, my work is animated by Dr. King's view that civil rights and labor rights are inextricably intertwined. "The duality of interests of labor and Negroes," he told the AFL-CIO Constitutional Convention in 1961, "makes any crisis which lacerates you, a crisis from which we bleed." Both movements are rooted in the idea that empowerment comes when many people speak with one voice, rallying as a community, taking collective action.

Going back to the Montgomery Bus Boycott nearly a decade earlier, the key strategist was a local leader of the Brotherhood of Sleeping Car Porters named E.D. Nixon, who saw the galvanizing potential of Rosa Parks' refusal to give up her seat at the front of the bus. Labor leaders like Walter Reuther, A. Philip Randolph and Bayard Rustin were also the driving organizational force behind the 1963 March on Washington, a demonstration that was about economic justice as well as racial emancipation (the full name was actually "The March on Washington for Jobs and Freedom").

Dr. King's ties and fellowship with the labor movement were deep. Selma opens with King accepting the Nobel Peace Prize -- it doesn't mention that one of his first tasks upon returning from Oslo to his hometown of Atlanta was to picket with striking workers at the Scripto pen factory.

Union members, from the rank-and-file up to representatives of the AFL-CIO Executive Council, came to march in Selma. Among those locking arms on the Edmund Pettus Bridge was Reuther of the United Auto Workers. It was also Reuther who posted bail after Dr. King's 1963 arrest in Birmingham. And the UAW provided the Detroit office space where King wrote his most iconic speech, "I Have a Dream."

Central to King's philosophy was the idea that men and women of all races deserve the dignity of work, the right to earn more than poverty wages. And he knew that goal was not attainable without full-throated worker voice. Here is Dr. King speaking to the Illinois AFL-CIO in 1965:

"The labor movement was the principal force that transformed misery and despair into hope and progress. Out of its bold struggles, economic and social reform gave birth to unemployment insurance, old age pensions, government relief for the destitute, and, above all, new wage levels that meant not mere survival but a tolerable life."

Dr. King's last campaign was a labor struggle. Many people are aware that King was assassinated in Memphis in the spring of 1968. Less well-known is what drew him there: solidarity with city sanitation workers, who, without the benefit of union representation, were rising up to protest humiliating pay and deplorable working conditions.

The catalyzing event was the gruesome death of two workers, crushed by a malfunctioning hydraulic ram in the back of a sanitation truck. The hard-working civil servants who picked up Memphis' garbage were tired of being treated like garbage. They walked off the job and organized under the proud, defiant banner, powerful in its simplicity: "I Am a Man."

Representatives from the American Federation of State County and Municipal Employees (AFSCME) came to town to help negotiate, but the recalcitrant Mayor, Henry Loeb, refused to come to the table. Mayhem broke out in the streets when police turned mace and nightsticks on marching strikers.

Arriving in Memphis on March 18 and declaring that "all labor has dignity," King spontaneously urged a general work stoppage -- not just in sanitation, but workers of all kinds throughout the city. He would return twice in the coming weeks. And on April 3, in his final speech, he seemed to foreshadow his own personal demise even as he imagined the ultimate triumph of the movement: "I may not get there with you. But I want you to know tonight that we, as a people, will get to the promised land."

Less than 24 hours later, he was gunned down while standing on the balcony of the Lorraine Motel. Within two weeks, the strike was settled. The city recognized the union and granted the sanitation workers a raise.

Nearly half a century later, workers' struggle for fair pay, decent benefits and economic security remains one of the pressing challenges of our time. With a declining percentage of workers belonging to unions, wages have stagnated and the middle class has suffered. Around the country, reactionary forces continue to exert their considerable power to try to muzzle worker voice.

But time and again, we see Dr. King's influence in mass mobilizations of people peacefully petitioning for their rights at work. We see it in the ongoing campaign by fast food workers to get the raise they deserve. We saw it in Madison, Wisconsin in 2011 -- thousands descending on the state capitol to protest a state law stripping public employees of collective bargaining rights. To ensure an economy based on shared prosperity, we must grow these movements, identifying new and innovative ways to lift up worker voice.

And as we do, we must continue to turn for inspiration to Dr. King. The King Holiday is a celebration of many things -- his pursuit of racial justice, his commitment to non-violent resistance, his belief in service and doing for others. But you might also call it the other Labor Day.