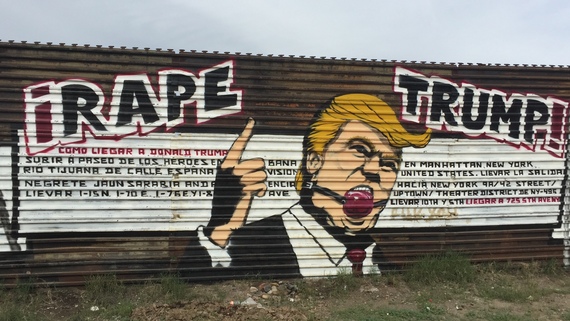 According to The Washington Post's Robert Barnes, Supreme Court Justice Antonin Scalia's death has plunged the nation's politics into turmoil. It may be more accurate to say the late justice's passing has cast a long shadow across an already dimly lit Republican Party -- a party whose erstwhile leader is the very poster boy for xenophobia.

As much as they despise acknowledging it, folks like Reince Priebus, Ted Cruz and especially Jeb Bush now know that 69-year-old braggart, Donald J. Trump, has taken over their party. Finely distilling and loudly amplifying the same wedge issues that once assured GOP victories, Trump has made the party unimaginably toxic.

The damage Trump's doing to the party of Lincoln is more elemental than even the deadly policy blunders of George W. Bush. Recall, those blunders -- perhaps worst among them the war in Iraq -- led former Republican congressman from Virginia, Tom Davis to famously lament that if the party's brand were dog food, stores would remove it from their shelves.

Forget dog food. The GOP could only hope to be dog food at this point. Think kyrptonite. Trump's GOP is kryptonite to those finest of American qualities: tolerance, optimism and diversity. But it's also Miracle Grow to our lowest common denominators: fear, hate and intolerance.

Billionaire v. Pope
Transitioning the kryptonite metaphor to the religious debate and reducing it a step further, Trump's particular brand of intolerance and fear-mongering about immigrants and refugees is antimatter to the rays of hope and lessons about love and tolerance Pope Francis offered during his sojourn through Mexico these past few days.

A quick physics lesson: Antimatter obliterates its material counterpart out of existence in the material universe. Put that in your crisper for a minute. What emerges is a crystal-clear revelation: Trumpism, such as it is, threatens the very existence of love and tolerance.

Ah, love -- that stuff upon which Christianity is supposed to be based. No wonder the pope called out the would-be Great Wall of Mexico builder, Donald Trump, as "not Christian."

Meanwhile, following in the footsteps of many of his most illustrious predecessors, including Pope John Paul II who apologetically entered the fray of Cold War politics in the 1980s and 90s, last week Pope Francis sounded a note of Ronald Reagan as a denouncer of walls and a proponent of bridges.

"Warsaw, Moscow, Budapest, Berlin, Prague, Sofia and Bucharest have become stages in a long pilgrimage toward liberty," the pontiff said during an address in Ciudad Juarez across the border from El Paso that featured reverberating audio and optics of epic proportion.

By comparison the pseudo-populist meanderings and drab, online backdrop of The Donald's "counterattack" looked downright puny as the GOP front-runner attempted to respond to Pope Francis. Trump even included a warning about terrorists possibly attacking Vatican City.

"If and when the Vatican is attacked by ISIS, which as everyone knows is ISIS's ultimate trophy, I can promise you that the Pope would have only wished and prayed that Donald Trump would have been President because this would not have happened. ISIS would have been eradicated unlike what is happening now with our all[-]talk, no action politicians," reads part of Trump's statement at donaldjtrump.com.

The contrast between Francis's subtlety and substance versus Trump's complete lack thereof couldn't be more profound. One presents words for the millennium, the other blabs on about issues of momentary import.

"It is admirable that in these events, entire peoples spoke out -- women, young people, men, overcoming fears, their irrepressible thirst for liberty speeded up developments, made walls tumble down and opened gates," the pope continued in his riff about the fall of the Berlin Wall and the Iron Curtain more than 25 years ago.

Not on Air Force One
Still, ultraconservative American clerics felt compelled to rush to Trump's defense when his self-proclaimed Christian piety was called into question by Catholicism's titular head.

"My advice to the [p]ontiff -- reach out and build a bridge to Donald Trump," admonished Pastor Franklin Graham, son of Billy Graham, from his own "epic" perch called Facebook. "Who knows where he may be this time next year!"

I know where Trump will be next year -- or at least where he will not be. So do President Barack Obama and old-guard Republican, Senator Lindsey Graham from South Carolina. Both have unabashedly predicted that Trump will never be President of the United States.

I'll go out on a limb and predict that around this time next year, Donald J. Trump will be on his second-hand airplane, pitching yet another reality show -- maybe even to NBC.

However, if America is what the current president, an old-guard Republican and this journalist think it is, Trump will not be on Air Force One in 2017 pitching into the dustbin of history the unscripted reality of America's crucial and -- dare I say it -- huge role in the affairs of humanity.

#Trumpothelcown
Though only, as far as I can tell, the second Twitter user following a single reference by someone with the handle @yikesks (props to you, Yikes) to coin the hashtag #trumpotheclown, I hope I have the courage to never back away from it -- even if (God help us) Trump were elected to the presidency.

Trump's clown status was solidified when he said on national television that the reason Fox News anchor, Megyn Kelly, was "unfair" to him during a debate was because she "had blood coming out of her wherever." Of course, the needle of my clown-o-meter had already begun ticking upward following Trumpo's declaration that most undocumented Mexican immigrants are rapists.

Recently, I saw firsthand what a joke Trump really is to many Mexican people during a tour guided by transplanted American former journalist, Derrick Chinn. Chinn, a native Ohioan, lives in Mexico and has been loving it for 10 years. He founded "Turista Libre," an authentic-Tijuana tour company, which the Washington Post and numerous media outlets have described as a look into side of life in a Mexican border town that as anything but bleak.

On Chinn's tour a couple of weeks ago, I and a gaggle of fellow reporters from San Diego snapped a flurry of iPhone and Android photos of a mural painted on the fence separating the U.S. and Mexico near Tijuana that expresses one Mexican artist's response to the GOP front runner's Mexicans-rape comments. The mural, shown at the top of this article, depicts Trump with a ball gag strapped to his big mouth. The English title reads, "Rape Trump."