NASA is on a planet-hunting mission, and it hasn't failed to deliver.

This week the space agency announced that its Kepler spacecraft has discovered what could be 833 new planets since January, bringing its total up to 3,538 potential planets. In case that count may be a bit hard to imagine, NASA put together an animation (above) illustrating all the planets Kepler has discovered so far.

Created by Kepler's Daniel Fabrycky, the video is the third visualization of its kind to depict extrasolar planets spotted by the space telescope.

As Fabrycky explains in a description of the video on YouTube, the animation shows the "relative sizes of the orbits and planets in the multi-transiting planetary systems discovered by Kepler up to Nov. 2013."

Various colors are used to differentiate each planet orbiting its specific star, while the size of each ring the colored circles travel along equates to the size of the planet's orbit. The 7-planet system KOI-351 is the most colorful in the animation -- can you spot it? 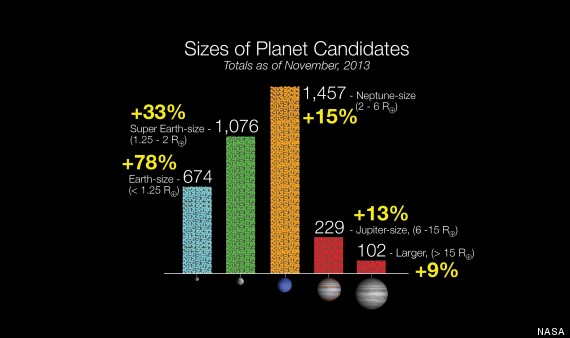 A chart created by NASA shows the sizes of potential planets spotted by Kepler along with the percentage increase per category since January, when the space agency released the last update.

NASA launched the Kepler spacecraft into orbit in 2009. Its aim has been to catalog celestial bodies that orbit stars in the Milky Way in hopes of finding more Earth-like planets.

As it turns out, habitable planets similar to Earth are far more common than previously thought. A study published Monday revealed that one in five sunlike stars observed by Kepler have an orbiting planet in the "habitable zone," suggesting that extraterrestrial life may exist in our own galaxy.