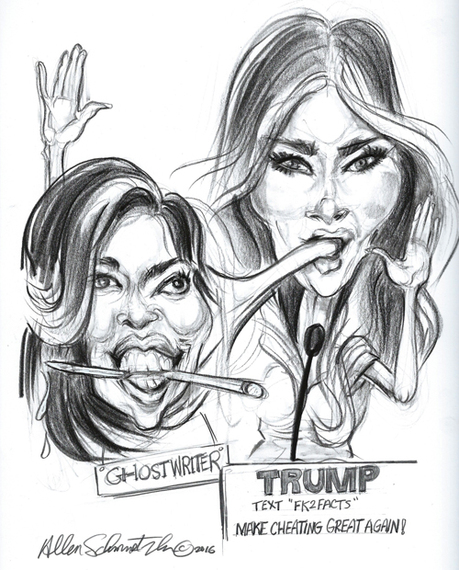 For the narcissist, whether delusional or just socially maladjusted, publicity is better than mainlining. I think we all have "addictions," of some sort, and if being the subject of continuous streams of "whatever" publicity is your thing, this seems to be a relatively harmless obsessive endeavor and victimless addiction. Not so for Donald Trump. For Donald Trump, it means he's going to win either way because he will sell more stuff, but the harm to those millions spider-webbed into his corner could equal the malaise left from an affect-less drug addict driven to feed their addiction at any cost. The body count left soulless from Trump's 2016 national narcissistic crusade will be historic.

I feel so heart-stricken for the thousands of "ethnocentrics" screaming synchronized hatred in the "Donald CONvention" arena. Trump-the-huckster accepts any publicity as a win, even if he is caught as the "Commander-In-Chief-of Cheating."

I was a public school secondary level teacher for 34 years. I taught Social Studies, a required subject, considered essential learning. Yet at times, with a chuckle and through my mind's eye I awoke to the realization that what I was really doing was controlling and socializing young people. This was the hidden agenda of public education, to coerce a sense of order, complacency and belonging, what was celebrated as "citizenship."

Playing by the rules was a cherished idea while cheating was seen as horrendous and a template of behavior likely to send someone to prison. Prison was the lowest form of life in this proud pull-yourself-up culture. We teachers employed many stealth strategies to catch cheaters in our classrooms. Students knew we were prowling for transgressors, understanding the energy invested equaled the seriousness of deviance. Getting caught cheating held serious consequences. Cheating once, was only the beginning. Getting caught the first time did not mean it was the first offense.

Teachers taught about plagiarism, offering meticulous rules to guide students so they avoided the trap of stealing other's intellectual property. Plagiarism was a despised and insidious form of lying and cheating. It contradicted the honest-laissez-faire-you-make-yourself spirit of American culture.

What happens to cheaters depends on applicable social variables. Usually, and with precedent, elected officials caught cheating, caught plagiarizing wear a scarlet "P," indicating serious character flaws. Ask Joe Biden for details. Now that the Trump "Make America Great Again" is tarnished with "make cheating great again" through plagiarism, will all the press be good press resulting in a win for Trump? Or, will finally, Trump fans see their savior without clothes, see him as the fraud he is, see him as plagiarizing the Presidency, plagiarizing American politics, see him as the needy narcissist-cheater who compulsively spins flip-flopping tales to mainline the publicity. To a Trump, all press is good press because all roads lead to more wealth, and more wealth leads to more press, and all press mainlines the narcissist.