As the plan to freeze federal employee pay makes clear, politics on Washington since the election has focused on ways that the government can cut spending and reduce the federal budget deficit. The Obama administration appears ready to concede the point made so frequently by incoming House Speaker John Boehner and other Republicans that it became the butt of a Saturday Night Live skit. "The American people," Bohener argues, "want us to focus on their message during the election: Stop the spending."

But do they? The best answer we have from opinion surveys is mixed. Yes, a majority of Americans and voters want to reduce unspecified spending and cut the federal budget deficit. But that's as far as the consensus goes. When asked about specific measures, especially those that go beyond symbolism, Americans are far from agreed on what to cut, and they offer tepid support (at best) for measures that might actually bring the federal budget into balance.

Let's review some recent polling data. Most Americans do voice concerns about budget deficits and unspecified spending. An AP-CNBC poll released just this morning, for example, finds that 69% of Americans consider the federal budget deficit to be extremely important (37%) or very important (33%). But keep that number in perspective: Respondents to the same survey rated other issues even more important, including the economy (90%), unemployment (82%), health care (79%) terrorism (75%) and taxes (70%).

AP's report emphasizes another more dramatic-sounding result from a question asked later in the survey: 85% say they are very or somewhat worried that "increasing the federal debt will harm the financial future of your children and grandchildren," a result that is "the strongest expression of concern since AP polls began asking the question in 2008." 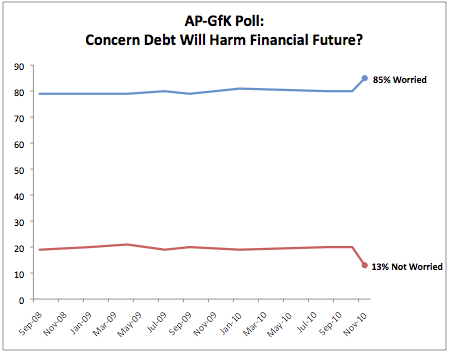 The change is abrupt, as illustrated in the above chart. In surveys conducted between September 2008 and October 2010, expressions of concern about the increasing deficits were remarkably consistent, ranging between 79% to 81%. But then on the latest survey, the total concern number jumped to 85%. Why? And why the inconsistency with the importance rating of the federal budget deficit, which fell slightly over the same time period?

A big clue is the new question inserted into the survey just before the item about worries over the deficit causing financial harm: "How likely is it that the current size of the federal budget deficit will cause a major economic crisis for this country in the next ten years?" Before trumpeting the apparent spike in worry about deficits, analysts ought to at least consider that the order of questions artificially primed worries about the deficit on the most recent AP-Gfk survey.

That said, there is no question that a majority of Americans worry about government spending and budget deficits. Consider the most recent NBC News/Wall Street Journal poll which presented a list of issue positions and asked voters to assess whether each one was a reason for their vote. Of 16 items tested, "supported cutting federal spending" ranked first, with 66% saying that position was a major reason to support a candidate. 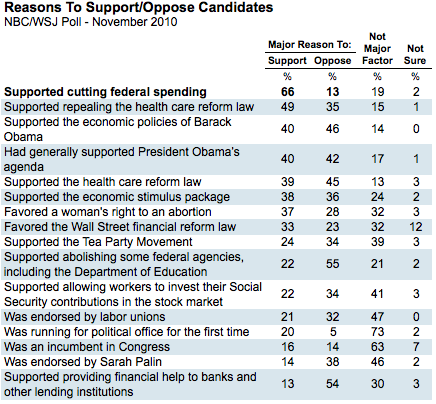 No other item came close, although ironically, the highest-ranking reason to vote against a candidate was support for a specific spending cut advocated by many Republicans, "abolishing some federal agencies, including the Department of Education" (55% major reason to oppose).

So we do have evidence that a large majority of voters would like to see cuts in "spending." But what spending do they want to cut?

The same NBC/Wall Street Journal poll also included a series of questions on the draft report released by the co-chairs of President Obama's Debt Commission. The first described the draft proposal:

Recently President Obama created a Deficit Commission of Republicans and Democrats to recommend a plan to reduce the federal deficit. The proposal would reduce deficits by about four trillion dollars over the next decade. To get these savings, the commission recommends 75 percent come from spending cuts and 25 percent come from increases in tax revenues. Spending reductions include cuts to Medicare, Social Security, and defense spending. The tax increases include higher gasoline taxes, lowering the corporate tax rate but limiting business tax deductions, and placing a limit on the tax deduction for homeowners with mortgages over five hundred thousand dollars. Now, overall, do you think this proposal is a good idea or a bad idea? If you do not have an opinion either way, please just say so.

On this question, only a quarter of American adults (25%) said the plan was a good idea, 40% said it was a bad idea and the rest (35%) had mixed feelings or no opinion. Those who said they voted in the mid-term elections consider it a bad idea by a 42% to 28% margin.

Also, as the Wall Street Journal's report pointed out, Republicans were more negative about the plan than Democrats. Only 17% of Republicans called the plan a good idea compared to 28% of Democrats.

The survey went on to probe respondents about three specific elements of the draft plan. As the table below shows, the least popular idea is the notion of "spending cuts to reduce the federal deficit that would include such things as cuts to Medicare, Social Security, and defense spending." Only 27% of Americans say they are comfortable with the idea, with the overwhelming majority (70%) either not very -- or not at all -- comfortable. The results were very similar among those who voted in 2010. 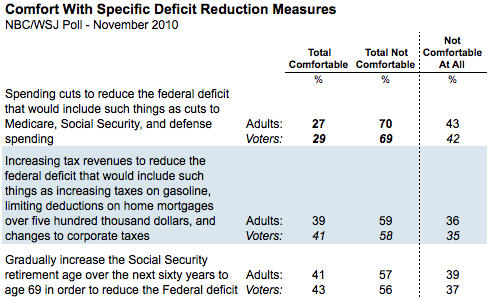 As for detailed cures, the poll shows little agreement -- a problem that has long bedeviled lawmakers who often speak about taming federal deficits but seldom vote to do so. Given more than a dozen options for helping balance the budget, majorities backed just four: Reduce the number of federal workers, trim their salaries, cut overseas military bases and eliminate the tax deduction on home mortgage interest in exchange for lower income tax rates.

"I'm sure there's waste somewhere," said Terri Davis, 44, a travel company employee from Ashburn, Va. "But I like a lot of government programs that keep order in the streets, that do research about what's dangerous. A lot of things are worthwhile."

Taken together, these data suggest that when Americans call for cuts in "spending," they mean something other than Social Security, Medicare and much of the military. But that preference puts 61% of the federal budget off-limits, according to the Center for Budget and Policy Priorities. The data also help explain why policy makers tend to go for symbolic measures -- such as freezing the pay of government workers -- that offend relatively few voters.

So yes, a large majority of Americans say they want to cut government spending. But if policy makers want to be responsive to that particular "message," they will need to confront the gap that exists between the way voters perceive government spending and its reality.

Thanks to Public Opinion Strategies and Hart Research for sharing additional data from the NBC/Wall Street Journal poll.