Nothing had adequately prepared me for a recent visit to Vietnam. I knew about the burgeoning economy, the booming tourist industry (500,000 visitors in January), the industriousness of the people, and even more about the corruption and repressive government. But as the bus turned into the main square of Ho Chi Minh City, formerly Saigon, I gasped like a child who for the first time was seeing the curtain rise on the magical beauty of The Nutcracker. It was the end of Tet, the Lunar New Year.

The streets were ablaze with thousands of delicate lights, entire palm trees were festooned like elaborate Christmas packages and as far as the eye could see, delicate light bulbs wove dancing webs of color across streets. Underneath, thousands of mopeds carried dangerously-overweight loads; some with a grandparent on the back and a child standing sturdily on the front frame were being driven by a stolid looking parent. The mopeds wove in and out of death-defying traffic, often at acute angles across each other's paths and the ever-increasing number of cars, mostly SUVs. The traffic lights provided at best only guidelines. Most striking were the handsome young moped drivers, dressed to the nines in the latest fashions but carefully helmeted as the law decrees. 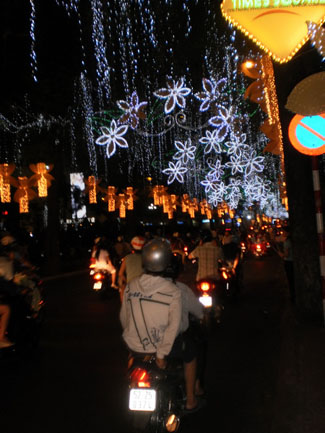 This did not look like the place that would answer the question over which I had been obsessing since I entered the country: "How could they have forgiven us?"

The previous week I had covered almost 300 miles of waterways, stopping at more than a dozen villages, floating fish farms, rice paddies, vegetable gardens, small factories, markets, temples, palaces, and museums along the Mekong Delta, even riding in a vertebrae-shattering ox-drawn cart. (This was not a trip for the fainthearted.)

As a graduate student in the 1960s, I was a certified Peacenik -- appalled by American barbarities in Vietnam that forever changed the World War II image of the United States and Americans of themselves. Even now it is too painful to think about the My Lai Massacre or the indelible picture of a napalm inflamed child running naked down a road in an attempt to flee from American bombers. What has made it possible for the villagers who greeted us enthusiastically to teach their little children to smile beguilingly as yet one more wave of camera-intrusive Americans barged into their neighborhoods? Hearing "Hello, hello, hello" chanted with the six tones of the Vietnamese language made each child sound like a children's choir. It was only when I reached the village closest to Ho Chi Minh City that the wave of the hand turned into an outstretched palm. Innocence was being lost.

My mission in HCM City was to visit the faculty of the Fulbright Economics Teaching Program at the University of Economics where I thought I could test the accumulated answers to my question with a professional group of Vietnamese academics. Founded in 1994 through a joint effort of two famous Vietnam veterans -- Senators John Kerry and John McCain -- the School, autonomous and highly regarded, is funded by the State Department and in affiliation with Harvard Kennedy School; it grants a Master's Degree in Public Policy.

The answers to my question had many parts, some more weighty than others, but almost to a person -- everyone from local guides, to professors, and senior staff at the American Embassy in Hanoi -- immediately responded: more than 60% of the Vietnamese population was born after the end of the war. The collective memory is fast fading and all eyes are on the future.

Others mentioned that because the majority of the country practices Buddhism, in which forgiveness is a major tenet, the religion has created an environment for forgetting the past.

Still others believe that Vietnam needs America to stave off the perceived Chinese threat. The rapid increase in China's militarization has created angst about China's territorial aims. Vietnam over the course of its 2,700 year existence has been invaded or colonized by China, the Mongols, Japan, France, and, of course, the U.S. As an amused young Vietnamese professor explained to me: "We've been invaded by so many countries that if we didn't forgive them, we wouldn't have any allies."

But floating above all of these partial answers to my guilt-laden question was one word: Trade. That is what has made the Vietnamese forgive the war: the driving ambition to create a vibrant economy much like China's. To do so it needs America (among others) as a trading partner. Last year Vietnamese exports to the U.S. totaled $18.3 billion. Seafood, clothing, shoes, and furniture were among the increasing number of products.

Whether the conversation was about national goals of improving the economy or on a small scale -- bargaining in the many markets -- everything appeared to be about "making the deal." The superb cuisine at the buffets in posh hotels reflected the diversity of who was "making the deal" in Vietnam: Chinese, Korean, German, American, French, and, of course, Vietnamese national dishes sometimes covered several rooms where business people could meet in small and sometimes larger groups with Vietnamese "deal makers." Of course, the big deal maker, the Communist government, was making its deals in private.

But like the elegant Crème Brulee introduced by the French to Vietnam, a slight tap of the brittle caramel, and the slick surface cracked. In every conversation (except with officials of course), an unattractive underside was revealed. Directly under the glitter are the squalid realities of a politically repressive system, whispered about or ignored in conversations with foreigners.

Corruption is endemic. Government officials confiscate neighborhoods, which they then sell to developers. The locals are expelled to shabby communes outside the cities. Education is in shambles. The government controls university curricula, lecture topics, reading lists, and examinations. Consequently, the very talent that is needed to develop science and engineering or a strong academic system goes elsewhere.

Poverty and unemployment are significant even though, like the Chinese, the Vietnamese have managed to cut abject poverty significantly. Wages remain shockingly low. Censorship is rife and Facebook is banned. According to the Committee to Protect Journalists (U.S.) before the 2011 Communist Party Congress meetings, Internet cafes and blogs were closely watched; dozens of activists and bloggers were arrested for "spreading propaganda against the state." The government dismantled websites, and a number of journalists remain in jail.

So what does the future hold? Can the Communist government, like China's, loosen some controls enough to allow capitalism to gain an increasing foothold and a substantial middle-class develop? How much repression will a growing middle class tolerate? During February the first pictures of the Middle East revolutions began to appear on hotel CNN channels. The memorable image of an Egyptian revolutionary with a cellphone in one hand and a rock in the other has as yet no resonance in Vietnam. Here, as the waves of mopeds and SUVs continue to surge toward new business opportunities in Ho Chi Minh City and Hanoi, for the foreseeable future the image of 'the cellphone in one hand and a Gucci shopping bag in the other" is more likely to hold sway.